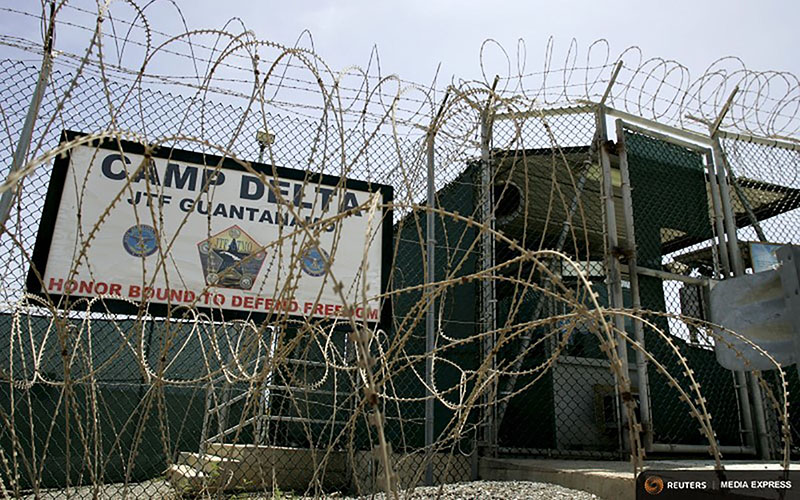 President Barack Obama said the prison housed at the naval facility in Guantanamo Bay, Cuba, is not only costly but is “a stain” of the rule of law that is being used by terrorist groups as a recruiting tool.. (Photo by Joe Skipper/Reuters) 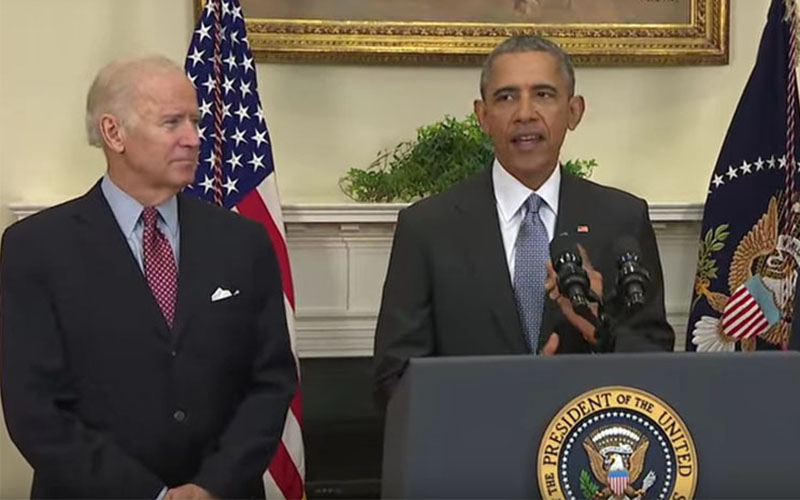 President Barack Obama, with Vice President Joe Biden, left, unveiled a Pentagon plan to close the military detention at Guantanamo Bay, Cuba, which would fulfill a pledge from his first campaign for president. (Photo courtesy the White House)

WASHINGTON – Arizona Republicans responded swiftly – and vehemently – to the plan announced Tuesday by President Barack Obama to close the military prison at Guantanamo Bay, Cuba, where some of the most notorious terrorism suspects are detained.

The Pentagon plan unveiled by the president would send 35 of the remaining 91 detainees home to prison or to detention in a third country and bring the rest to a new high-security prison to be built at one of 13 sites being studied in the U.S.

Obama, who promised in his first campaign to close Guantanamo, called the detention center “a stain on our broader record of upholding the highest standards of the rule of law” that has subsequently been used as a recruiting tool by terrorist groups.

The Defense Department said its plan to close the detention center at Guantanamo Bay, Cuba, is based on four tenets:

1. Securely and responsibly transferring to foreign countries detainees who have been designated for transfer by the president’s national security team;

2. Continuing to review the threat posed by those detainees who are not currently eligible for transfer through the Periodic Review Board;

4. Working with Congress to establish a location in the United States to securely hold detainees whom we cannot at this time transfer to foreign countries or who are subject to military commission proceedings.

Closing the prison would also save the U.S. money, he said. While a new detention center is estimated to cost between $270 million and $475 million, the government would save $65 million to $85 million each year over the cost of running Guantanamo.

“For many years, it’s been clear that the detention facility at Guantanamo Bay does not advance our national security – it undermines it,” Obama said, according to a White House transcript. “This is not just my opinion. This is the opinion of experts, this is the opinion of many in our military.”

It was not the opinion of Republicans, who called the proposal everything from “arrogant” to “ill-advised political theater” that will put the U.S. at further risk.

That was echoed by Rep. Matt Salmon, R-Mesa, in a statement that said the move “will keep us from obtaining crucial information needed to defeat our enemy and set free terrorist combatants devoted to killing Americans at home and abroad.”

Republican Reps. Trent Franks of Glendale and Paul Gosar of Prescott both said the president’s proposal is illegal, another example of what Franks called the “breathtaking” arrogance of Obama’s presidency as a whole.

Gosar called the plan “a perfect analogy of his (Obama’s) entire seven years in office.”

“The plan he announced today is heavy on rhetoric, short on specifics and unlawful,” he said.

Sen. John McCain, R-Arizona, was also upset by what he called a lack of specifics in the plan, saying the president “passed the buck to Congress.”

“Congress has waited for seven-and-a-half years for President Obama to provide a plan to achieve his goal of closing the detention facility at Guantanamo Bay,” McCain said in a statement from his office. “What we received today is a vague menu of options, not a credible plan for closing Guantanamo, let alone a coherent policy to deal with future terrorist detainees.”

Rep. Martha McSally, R-Tucson, who said she supervised counterterrorism efforts while serving in the Air Force, said that releasing detainees would actually fuel “the propaganda and recruitment of dangerous terrorist elements.”

“Let’s face it: This decision is about fulfilling a campaign promise, not strengthening our national security,” McSally said.

Democratic members of the state’s congressional delegation did not immediately return calls seeking comment on the plan Tuesday.

But lawmakers were not the only ones to weigh in: The National Republican Congressional Committee sent a flurry of emails shortly after the announcement asking Democratic congressional hopefuls if they “want to bring terrorists to the U.S.” by standing by the president.

One of those Democrats, former Arizona Rep. Victoria Steele, who is running in McSally’s district, blasted the NRCC’s insinuations.

“I’m not going to take a lecture from Congresswoman McSally and her Washington handlers when it comes to protecting us from terrorists,” Steele said in a statement from her campaign.

“This is the same crew that still refuses to prevent suspected terrorists on the no-fly list from buying assault weapons and explosives,” she said. “This is the sort of D.C. hypocrisy that makes everyone think that Congress is permanently broken.”