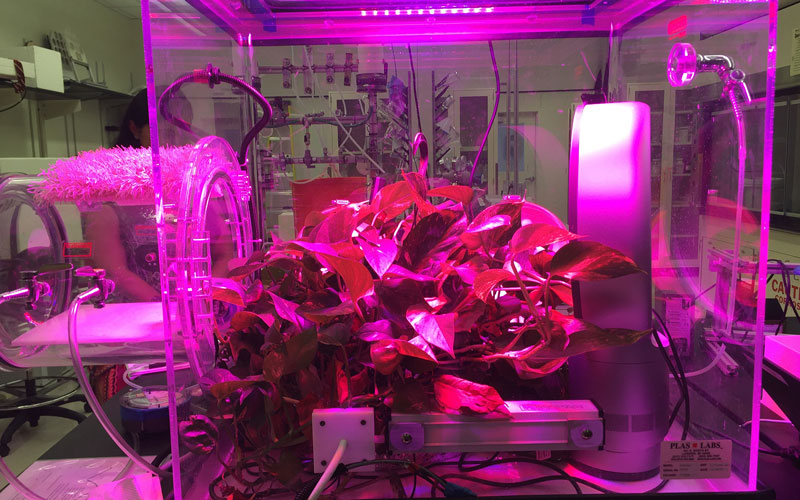 This greenhouse unit was one of the first experiments installed in the Center for Negative Carbon Emissions lab. Note the white plastic filter on the top left of the unit, needed for the moisture-swing process. (Photo by Miguel Otárola/Cronkite News) 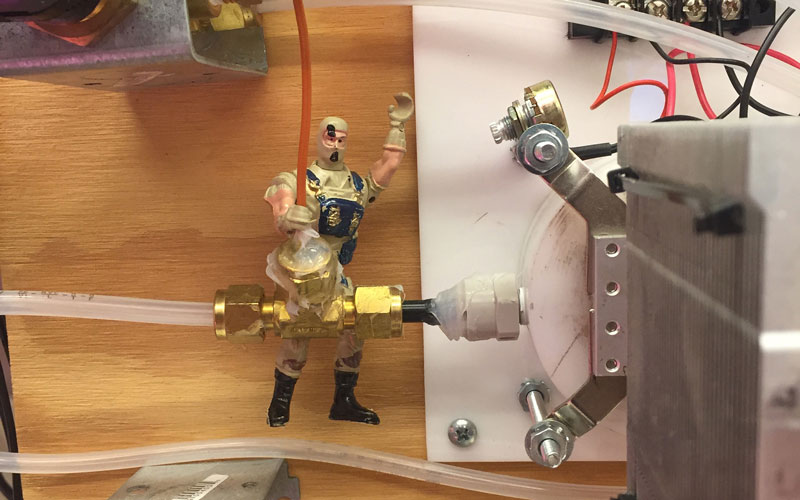 A little toy figurine hangs on one of the experiments in the Center for Negative Carbon Emissions lab. “Sometimes these students are here for long, long hours, so it turns into home,” Steve Atkins says. (Photo by Miguel Otárola/Cronkite News) 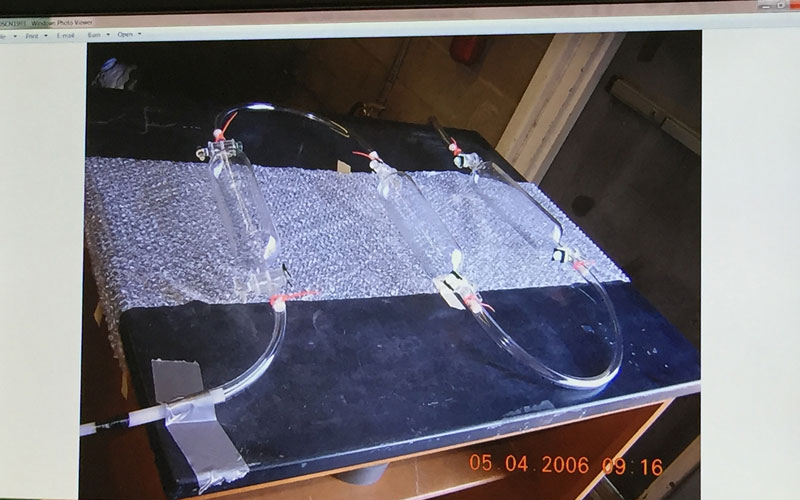 Allen Wright shows photos of his career collecting carbon dioxide. “Those are … the four one-liter flasks of the first batch of carbon dioxide captured from the atmosphere in the whole world,” he says. (Photo by Miguel Otárola/Cronkite News) 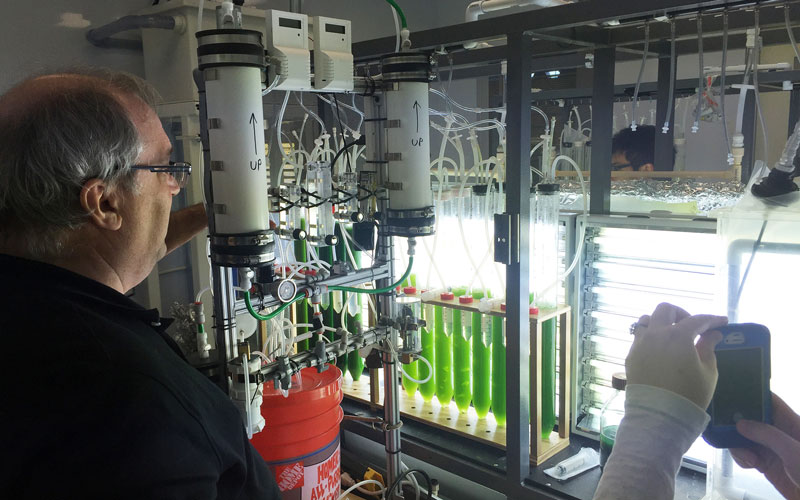 Steve Atkins sets up a moisture-swing unit to the algae tubes at ASU’s Polytechnic campus on November 20, 2015. The unit would feed the algae carbon dioxide throughout a 2-hour session. (Photo by Miguel Otárola/Cronkite News) 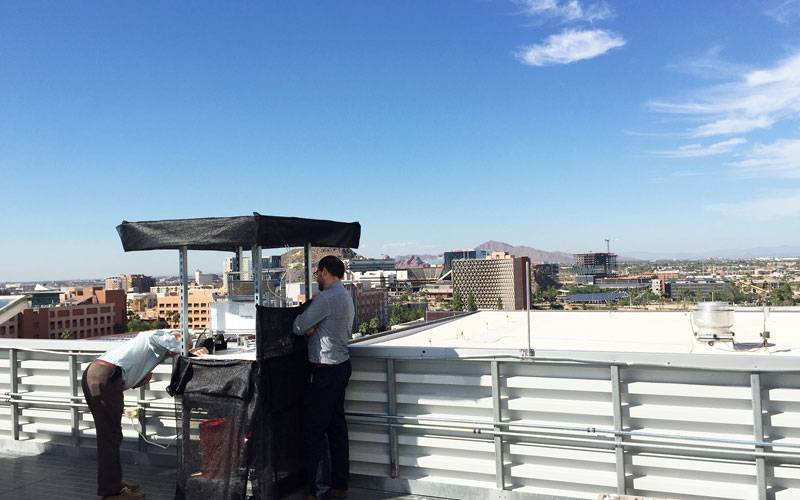 Allen Wright (left) and Christophe Jospe from the Center for Negative Carbon Emissions inspect a moisture-swing unit on the rooftop of ASU’s ISTB 4 building on October 14, 2015.
(Photo by Miguel Otárola/Cronkite News)

The unit is about the size of a telephone booth. Two filters made of a resin material are placed above a see-through tank holding about 400 parts per million of carbon dioxide.

A computer program drops a filter inside the tank. A spray nozzle dampens the filter with water. The resulting moisture releases the carbon dioxide into the tank. This is a “catch and release” experiment to measure and improve carbon dioxide collection.

The goal is to protect the Earth from climate change.

The “moisture-swing” experiment is the brainchild of the Center for Negative Carbon Emissions at Arizona State University. Atkins, who is 55 and has silver-white hair, is the center’s senior engineer.

Eventually, Atkins and his colleagues want to create large, mass-produced units to collect carbon dioxide. Such units could be installed in dry, undisturbed areas around the world. Each could fit in a shipping container and could pull about a ton of carbon dioxide a day from the air, according to Atkins. There’s a Styrofoam model of one of these units in one of the center’s labs.

But the verdict is out on carbon-capture technology. It’s a costly, controversial and relatively untested method that falls into the category of “geoengineering” — tinkering with the atmosphere in a way that might have unforeseen and unintended consequences, but could help humans adapt to a hotter planet.

Atkins and his colleagues hope to reach a point where moisture swing makes a worldwide impact.

But it’s a slow process.

So far, researchers have gotten the contraptions on the roof to work at 12 percent efficiency, collecting only about 1 percent of their weight in carbon dioxide.

Atkins understands that at the moment someone who bicycles to work instead of driving is probably doing more for the environment.

“I would say we are about a year away from seeing a unit that will collect a kilogram (of carbon dioxide) a day,” he says. “Something that will be about 3 feet long, a couple feet wide, and it’ll go up to 6 or 8 feet.”

Once Atkins is sure that the rooftop experiment is functioning properly, he closes the roof door behind him and says, “That’s it! That’s how we save the world.”

The enemy
Carbon dioxide has been documented as a principal culprit in the rise in global temperatures.

Its levels in the atmosphere contribute to melting glaciers and diminishing ice in polar regions. The resulting rising sea levels are predicted to damage some lowlands, coastal cities, and sea-level islands. Floods, droughts and storms are predicted to intensify. The disproportion of carbon dioxide is a catalyst for ocean acidification, destroying calcifiers like certain algae and coral that are the essential base for underwater ecosystems.

Most climatologists agree the increase in carbon-dioxide concentrations is largely due to post-Industrial Revolution human activity. For hundreds of thousands of years prior to the Industrial Revolution, carbon dioxide was never higher than 280 parts per million. In 2015, that level jumped to more than 400 parts per million, according to NASA. Many scientists agree we’re dangerously close to a tipping point that will precipitate a dangerous temperature increase.

At the December 2015 United Nations Climate Change Conference in Paris, curbing carbon dioxide emissions was a key topic. The United States pledged to reduce its own greenhouse gas emissions by 26 percent of its 2005 levels by 2025.

Earlier in 2015, a U.S. government-sponsored panel from the National Academy of Sciences urged an increase in research of geoengineering technologies, in addition to drastically reducing greenhouse emissions to combat global warming.

This could give moisture-swing technology the boost it needs to test its potential on the main stage: the real world.

“Of course it’s daunting.”
Klaus Lackner, 63, is the director of the Center for Negative Carbon Emissions. For Lackner, the discovery of the moisture-swing technology started with a search to find a solution to global energy demands.

He knew the continued increase in use of fossil fuels would make for intolerable levels of carbon dioxide in the atmosphere.

The trick is to limit the impact of fossil fuels on the environment.

“Of course it’s daunting,” Lackner says. “But otherwise it wouldn’t be a challenge, would it?”

Lackner moved to the United States from Germany in 1979. Twenty years later, Lackner and Allen Wright, the executive director of the center, began their collaborative relationship. They were both working at the famous Biosphere 2, an ecosystems research station located about an hour north of Tucson. Back then, Lackner was the first to suggest that pulling carbon dioxide out of the air was essential in order to manage the emissions of the gas, according to the center.

While at New York City’s Columbia University in 2003, Lackner and Wright met an environmentally friendly investor and founded Global Research Technologies. Wright moved to Tucson and began testing experiments designed to find ways to pull carbon dioxide out of the air. Lackner lived in New York and visited often to work on projects.

Lackner is tall and lean. Wright has a bushy grey beard and wears thick-rimmed glasses. “(Lackner is) a theoretician and a physicist, and I’m kind of a pragmatist and a mechanical kind of guy,” Wright says one day in his office at ASU. “He thinks of things to do and I figure out how to do them.”

Wright looks through the photos of his time with Global Research Technologies, carefully indexed on his office computer. One photo shows four glass tubes filled with carbon dioxide — a memento from the day they first effectively captured the greenhouse gas out of the air.

“Those are the four flasks, the four one-liter flasks of the first batch of carbon dioxide captured from the atmosphere in the whole world,” Wright says.

After Global Research Technologies dissolved in 2008, Lackner and Wright worked at Columbia’s Lenfest Center for Sustainable Energy. They were then wooed (by ASU President Michael Crow, among others, they say) to start the ASU center. At ASU, they would be able to create larger experiments in a climate that bodes well for the moisture-swing process, Wright says. They moved to Tempe in August 2014.

The Center for Negative Carbon Emissions began humbly. The first lab experiment involved a small greenhouse capsule and a house plant. Engineers and students then used the moisture-swing concept and resin to design all sorts of other experiments.

One reason the center is based in Arizona is because moisture swing works best in hot, dry locales.

Learning by doing
Christophe Jospe, the center’s chief strategist, is a fast-talking 29-year-old Columbia University graduate who studied environmental science and policy. A class called “Global Climate Change,” he says, changed his life because “it basically gave me the conviction that, alright, we’re screwed.”

Jospe lives in Manhattan and mostly works remotely. His job is to seek ways to deploy carbon-capture technology into the world.

It’s a bit frustrating, he says, when many, including the Intergovernmental Panel on Climate Change, see carbon capture falling under the “geoengineering” label.

To Jospe, that term has a negative connotation and has too many connections to risky tactics like solar radiation management, which would scatter chemicals in the atmosphere that could reflect more sunlight back into space.

He says carbon capture does not manipulate the environment, but rather works like a trash or recycling bin for carbon dioxide.

“You’re pulling carbon dioxide out of the atmosphere and sequestering it,” Jospe says. “You’re not necessarily geoengineering, you’re just balancing the books from carbon that you’ve already emitted.”

There are a handful of carbon-capture companies already operating around the world: Global Thermostat in the United States, Climeworks in Switzerland and Skytree in the Netherlands, to name a few. Other carbon-capture-and-storage technologies collect carbon dioxide that comes straight out of coal-plant smokestacks.

In early October, Jospe visited Carbon Engineering, a pilot plant in Squamish, British Columbia, that claims it is capturing a ton of carbon dioxide a day. “It’s interesting and it’s working and it’s a big deal that it’s working,” he says. “It’s kind of a major feat for this industry.”

Jospe says other methods to capture carbon dioxide are much more expensive than moisture swing. Some carbon-capture techniques use sodium hydroxide; others use high-temperature retrieval. Moisture swing, on the other hand, collects carbon dioxide in resin materials and utilizes water, wind and the sun to drive the process. Atkins likens it to “drying your clothes on the clothesline, as opposed to putting them in the dryer.”

The center’s scientists, like scientists worldwide, compete against each other for funding.

The center applies for anywhere between 10 to 20 grants a year, in addition to gathering funding from other private sources. They have an annual budget between $1 million and $2 million.

Once in mass production, the moisture-swing units could lower the price of captured carbon dioxide to $30 a ton, according to a grant proposal by the center.

A 2015 study by climate researcher Sabine Mathesius and her colleagues show that regardless of carbon capture efforts, the effects of carbon dioxide on ocean acidification will not be reverted for hundreds of years.

Political and economic tensions between fossil-fuel advocates and renewable energy industries continue to mount. In 2015, for instance, the Obama administration rolled out its Clean Power Plan, which aims to reduce carbon-dioxide emissions from power plants by 32 percent by 2030, as compared to carbon dioxide levels measured in 2005. The administration said the states had plenty of time to tailor their plans to regulate the power plant emissions. But the plan was challenged by some states and was temporarily frozen by the Supreme Court in February.

Not much time to waste
On a recent morning, Atkins parks his grey Chevrolet Colorado pickup in front of the center’s Tempe laboratories. Two helpers load a handmade contraption consisting of plastic tubes, dials, pressure gauges, containers holding a white plastic and an orange bucket onto the bed of the truck.

Once the contraption is strapped into the truck, Atkins drives down the freeway. Power plugs and thin tubes twitch in the wind.

At the ASU Polytechnic campus, the unit is unloaded and wheeled to a small room in a science building where tubes of green algae bubble in front of fluorescent light stacks. The room smells of rotting flowers.

It’s purposefully hot inside the room; the algae live better in high temperatures.

Atkins takes gentle breaths. Sweat beads on his head. After 30 minutes of trial and error, he and his assistants connect the unit to the tubes of algae. The unit feeds carbon dioxide to the algae, an experiment that could help scientists learn how to recycle the greenhouse gas into algae-based biofuel.

It’s one of the ways the center’s scientists hope to adapt moisture-swing technology to the real world. And they know there’s not much time to waste.