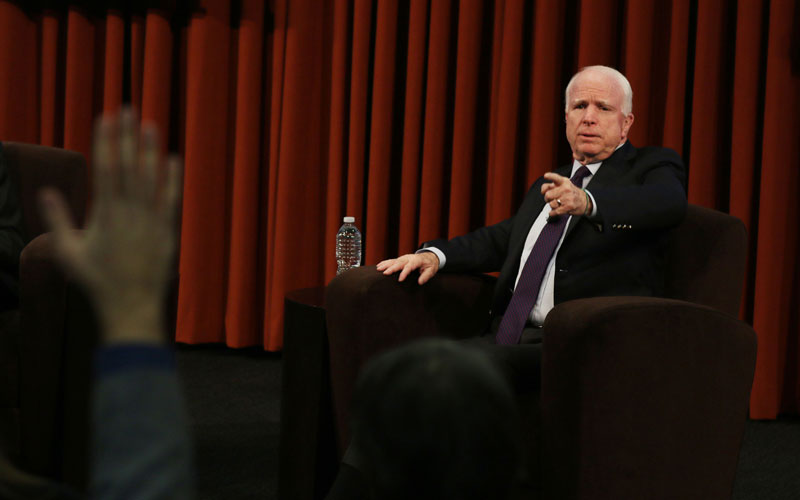 Sen. John McCain fields a question Friday during the Iconic Voices series at the Walter Cronkite School of Journalism on Friday. (Photo by Alejandra Armstrong/Cronkite News) 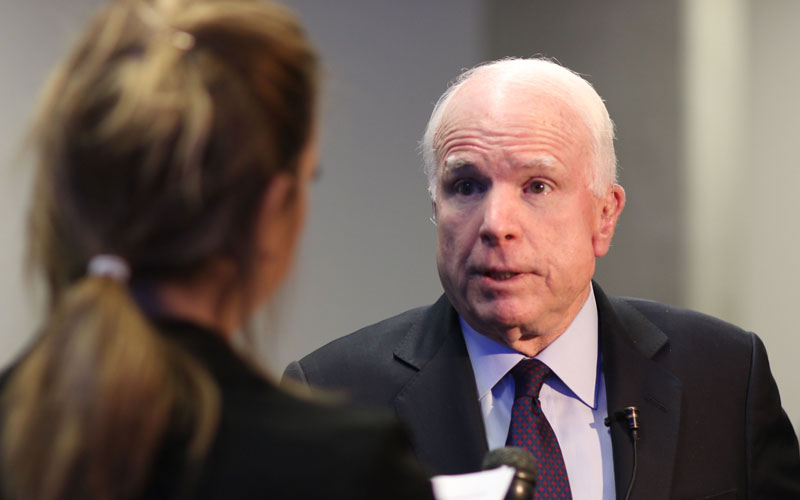 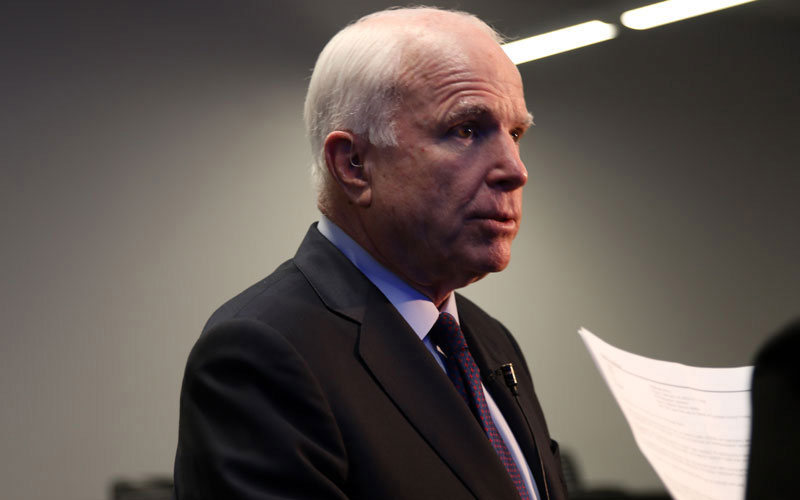 The interview, which followed an hourlong discussion and questions from students at the Walter Cronkite School of Journalism and Mass Communication, has been edited for length and clarity.

Blake Benard: You’ve been focused on what is happening in Syria for a long time. With the escalating problems, what solutions do you see to helping put an end to the Syrian conflict?

McCain: The solution to start with is a no-fly zone, a safe zone where the refugees can be rather than having to flee and inundate Europe and even come to the United States. The second thing we need to do is take out ISIS. That means go to Raqqa, where their base is. And a multi-national military composed primarily of Sunni-Arab countries. Unites States contributing 10,000 of the 100,000 that would be required. And finally we have to get rid of Bashar Al-Assad because he’s the one that caused all of this and he’s the one that already killed 250,000 of his citizens.

Benard: So you would be OK with sending more troops to Syria?

Benard: You’ve been a big supporter of national security during your entire time in the Senate. Apple CEO Tim Cook refused to comply with some recent government requests to build a backdoor access to a iPhone to gain access to the device owned by one of the San Bernardino attackers. What’s your position?

McCain: It’s a very difficult issue. But I think if this were the case where information were in someone’s home that could lead to a preventing another terrorist attack it would be something we would all agree with; go to a federal judge and get a warrant … But what we really need to do is have our military and high-tech community sit down and work this out. There’s bound to be a resolution. Right now the attention is right to privacy vs. national security. I think we could avoid this by having a select commission who would sit down and show us a pathway forward.

Benard: How far should the government be able to go if we do step down this road?

McCain: It’s always tension between the two. Privacy vs. security. But there’s no doubt that ISIS is trying to orchestrate more attacks like San Bernardino. And they’ve proven that they can do it. So I would hope that Silicon Valley would understand that there has to be some mechanism, some way, that we can prevent these attacks. If is is required to know what they are doing on the internet, then that obviously is something we need to look at carefully.

McCain: Well, at that time … there was plenty of time left in a presidential term. Second of all, the Democrats under Sen. Harry Reid changed the rules from 60 votes to 51 and confirmed a large number of lifetime appointees in gross violation of everything I had stood for. I told them that there would be a price to pay at that time. But most importantly, the American people after this election should be the ones to decide who the next Supreme Court Justice should be.

Benard: Do you think it’s good for the American people to have to wait that long?

McCain: I think so. The choices whether we would allow President Obama to appoint somebody and remember the Constitution says ‘the Senate confirms’. By the way it was President Obama that tried to filibuster Judge Alito. Now, of course, he is against a filibuster.

Benard: Many people have been turned off by the mudslinging and the general rancor in the presidential debate. How can we get back to civil discourse in politics?

McCain: The American people have to reject this mudslinging and character assassinations that are going on. They have to reject people that practice it. I’m sorry to say now it has reached a new low. I was in two presidential campaigns competing for the nominations. I never called an opponent of mine a liar. I never disparaged their character or integrity. I fought like hell with them when we had our differences on issues. So what has happened we’ve lost our view of the issues and concentrated on the latest insult. We have a world on fire. We should be talking about the threats to our national security. Instead we’re talking about whether somebody attended a hearing or not. It’s not good for the American people. It needs to stop.

Benard: How does that affect how you will run your re-election campaign?

McCain: I will conduct it the same way as all my others. I’m a passionate and hard campaigner, but I’m not going to savage the reputation of my opponent.

Benard: I know you are a big sports fan. Do you think there should be a new stadium downtown for the Arizona Coyotes?

McCain: I will do anything possible to keep the Coyotes here in Arizona. There are other venues where they would be glad to offer them a facility. One of the options I think is worth exploring is a downtown facility where both the Suns and Coyotes can perform. It’s obvious that we need a new facility … We have an exciting hockey team. We’ve got a couple young men that are fantastic and we’ve got an old guy named (Shane) Doan who is having the best year he’s had in years. I regret that we aren’t having a packed house every time we play.