The company, Shuttle Mexico, takes Phoenix and Mesa residents to Nogales, right next to the Mexico-Arizona border. More motivation to use travel to the border is occuring with the worth of the peso so low.
(Photo by Kaitlyn Ahrbeck/Cronkite News) 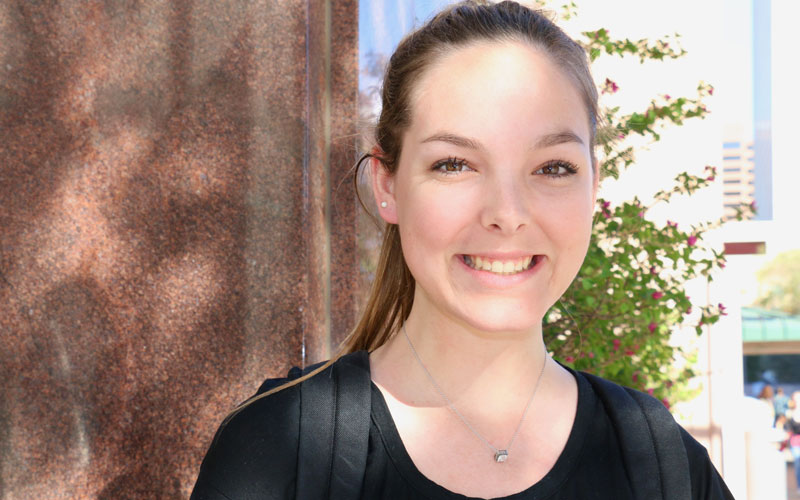 Danielle McNally, a sophmore ASU student, talks about how almost all of her sorority sisters will be going to Mexico over spring break. The girls have even more motivation to go with the peso value being so low.
(Photo by Kaitlyn Ahrbeck/Cronkite News)

The peso rebounded slightly this week following an announcement by the Mexican government that it will cut budget spending. The Bank of Mexico also raised interest rates in response to falling oil prices and global volatility that have sent the peso to all time lows against the dollars. Some analysts predict the rebound will be short lived.

The peso’s value has fluctuated from 19.10 earlier in the week to about 18.40 Thursday, generating enthusiasm among students and Arizonans alike about traveling south.

“You always hear ‘spring break in Mexico,'” said ASU sophomore Ryan Santistevan, 19. “The peso being low is a motivation to go.”

Websites such as studentcity.com and springbreakcancun.com are creating flight packages and planned trips to Mexico specifically for college students for the 2016 spring break season.

“I’m in a sorority, and almost all the girls are going to Cabo or Rocky Point for spring break,” said ASU journalism student Danielle McNally,19. “I always fly to Mexico. … I’m from California, and I would always fly with my family or friends.”

According to the United States Department of Commerce, almost 7 million Americans visited Mexico by plane from January to October 2015. With an increase from 2014, Americans make up the main air travelers to Mexico.

Although Mexico will be a more popular spring break destination due to the low peso, safety concerns still exist. The U.S Department of State issued a travel alert for Mexico last month, as the number of U.S citizen deaths in Mexico have slightly increased since 2014.

“There is always going to be talk about a safety scare for people on spring break,” McNally said. “But I have never had the slightest problem, or problems with people or overall safety.”

“My step-dad is a cop, and he is really sketched out about going to Mexico,” Knudson said. “I don’t care how cheap it is, I do not want to not come back from Mexico.”

Not just students plan to take advantage of the weakening peso. Recently, retired elementary school teacher Angelica Bush, 60, sat at the Tufesa International Bus Station in Phoenix, waiting for her bus to leave to Mexico.

Tufesa and Shuttle Arizona take travelers between the U.S. and Mexico. Bush planned to visit her family in Mazatlán, Mexico. She says with the weakened peso, it’s a lot easier for her travel to and from Mexico. She plans on eating a lot of marlin, a popular dish in Mazatlan, as the prices are even cheaper now with the depleting peso.