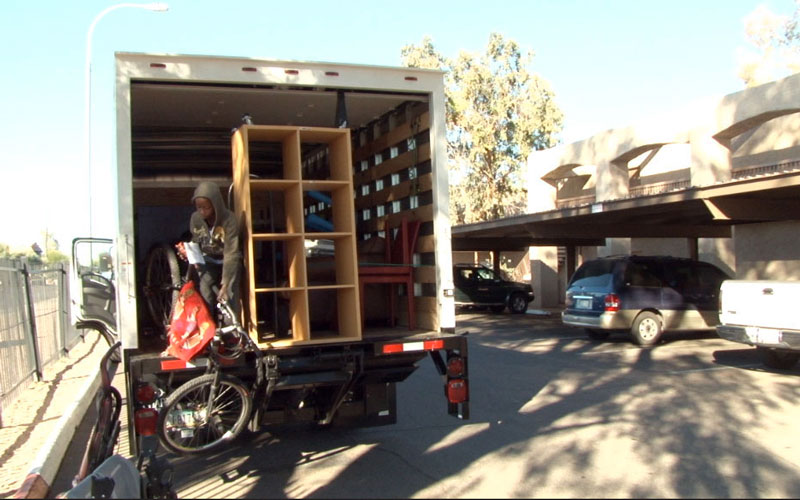 A 9-year-old refugee who came with his family from the Democratic Republic of the Congo unloads his new bicycle from a truck filled with furniture brought by the Welcome to America Project, a nonprofit that helps refugees in Phoenix. (Photo by Jackie Padilla/Cronkite News) 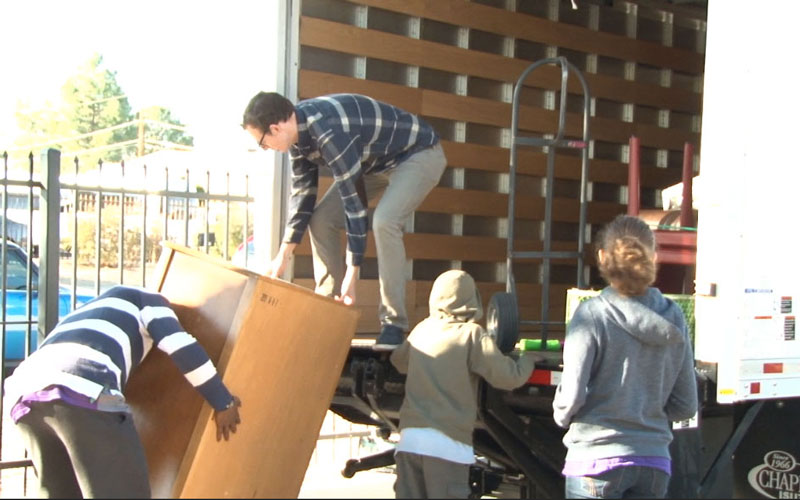 Volunteers with the Welcome to America Project help unload a truck full of furniture for a family from the Democratic Republic of the Congo who were recently resettled in Phoenix.
(Photo by Jackie Padilla/Cronkite News)

A 9-year-old refugee who came with his family from the Democratic Republic of the Congo unloads his new bicycle from a truck filled with furniture brought by the Welcome to America Project, a nonprofit that helps refugees in Phoenix. (Photo by Jackie Padilla/Cronkite News)

Arizona has resettled more than 70,000 refugees in the last four decades, spending more than $10 million each year in federal dollars, according to the U.S. Office of Refugee Resettlement – putting it in the top ten states last year to accept citizens from war torn and conflicted countries.

According to the Arizona Department of Economic Security’s Refugee Arrivals Report, most refugees came from Vietnam, Bosnia, Cuba, Somalia, Burma, Bhutan, Democratic Republic of the Congo, Sudan and Afghanistan. Last year, the state accepted nearly 4,000 refugees including 138 refugees from Syria.

The federal government, through the Department of Economic Security, distributes money to four refugee resettlement agencies to place and educate the incoming refugees. Refugee Focus, part of Lutheran Social Services of the Southwest, is a nonprofit and one of four organizations working as a local voluntary resettlement agency in Arizona, according to DES.

Each year, Refugee Focus resettles 1,000 or more refugees in Phoenix and Tucson with a budget of about $4 million, according to Lutheran Social Services of the Southwest, which runs the program.

Connie Phillips, its president and CEO, said they have long-standing agreement to fund Refugee Focus, as part of $9 million in federal grants it receives each year to provide help to refugees, as well as the elderly and disabled.

“These are people who are fleeing persecution, who are looking for a way to establish their lives and safety and so many of them want so much better for their children,” Phillips said.

The federal dollars are distributed through DES, though few audits have examined exactly how the money is spent, a point of contention for some state legislators. Arizona Republican and Speaker of the House David Gowan is seeking legislation that would require an accounting of the money spent.

“Refugees are supported by federal money, there is no state money that goes to refugees for their resettlement,” Phillips said. “That comes from the federal government, it comes through our state and we use that money to support them, but for a very short period. So refugees are only supported for 3 to 6 months at the most.”

Arizona refugees reflect the global unrest of any given time period from Bosnia in the 1990s, to Iraq in the mid-2000s. During the 1990s, as communist Yugoslavia broke apart, various political, ethnic and religious groups fought for control over the region that is now Bosnia and Herzegovina.

“One day I was in the hospital working, the next day I was on the front line. Untrained, unprepared in gym shoes and jeans and people that I know, that I grew up with, started being killed. Many died,” said Esad Boskailo, a Bosnian who had been a family practice physician for a decade before the war.

He said he eventually was captured by Croatian paramilitaries and moved around six different concentration camps to keep him hidden from his family and the European Commission for Human Rights, which he said was looking for him and other people placed in the concentration camps.

After he was freed, the United Nations helped him get to a plane headed to Chicago, where his family had resettled months earlier. He eventually ended up in Phoenix where he started his residency for psychiatry and joined the nearly 7,000 Bosnian refugees that have settled in Valley since 1993, DES records show.

According to the U.S. Department of State, the criteria for resettlement requires a person to prove a fear of persecution in one of five areas: religion, politics, race, nationality and involvement in a particular social group.

The State Department says more than 3.3 million refugees have been admitted into the United States since 1975.

They begin in low-skilled jobs, mainly because of a lack of English skills. When Boskailo arrived in the United States, he started to study to get his license to practice medicine. He got a medical textbook in English, but had to look up every word in a dictionary.

“I was studying for at least 20 hours a day when I came. I remember it was Saturday, on Monday I bought a book of internal medicine, it was like 700 pages, and I started reading. And I remember reading the first page, it took two weeks,” Boskailo said.

Boskailo now works at a psychiatric hospital, but said he always makes time to talk to fellow refugees, whether they need professional help or somebody to talk to. At Maricopa Integrated Health Systems, where Boskailo practices psychiatry, there also is a refugee women’s health clinic co-founded by a refugee from Burundi, Jeanne Nizigiyimana, who has been helping refugees since she arrived more than 20 years ago.

“Not only can I relate to who they are but also to what they have gone through, because I know what it means to be a survivor of war,” Nizigiyimana said. “I’ll tell you definitely language barrier is the main issue, but also the readiness of the host country to have someone new who has no knowledge of the system, no knowledge of the country.”

Phillips says that when refugees arrive they often need everything from clothing to furniture, in addition to job training and language skills. Refugee Focus assists with job placement, including a partnership with the Homebuilders Association of Central Arizona, and language skills.

The Welcome to America Project is a nonprofit that fills the gaps left by the state and private sector. Operated with donations and volunteers, it delivers furniture, clothing, toiletries, dishes and bicycles to new refugees in the Phoenix area.

“The most important thing that we do, the thing that I think really lasts for the families is that we bring community members out to their home and they’re able to say ‘Hey, we’re really glad that you’re here and that you’re safe, and we welcome you as a part of our community,” said Collin Cunningham, the project’s executive director. “And that really provides encouragement and hope to these families as they overcome so many challenges in the resettlement process.”

A few days later, furniture from its warehouse is packed up to be shipped off to Ilondo Charlotte and her two nephews, who came to Phoenix from the Congo.

“First of all I want to learn English because that’s going to help me get ahead. My big dream is to get into medicine. That’s what I want to do in the future,” Charlotte said.

Phillips said a primary goal is to help refugees overcome cultural and language barriers, especially in communities where people don’t understand the importance of resettlement for a refugee family.

“It’s about getting to know the people that are coming here and understanding that they are the victims of the very same terrorists that we’re afraid of, they’re just as frightened,” she said. “So bringing the people here who are fleeing the same groups, and for them to be a part of the community here, is something very positive that we can do about the issue of terrorism and the fear.”

Some refugees, like Boskailo, never wanted to leave their country, but had no choice. After six or seven years in the U.S., he returned to Bosnia to visit. Now, he visits every year, but says he wouldn’t move back permanently.

He has since built a successful medical career and written a book about his experience during the Bosnian War.

“I am not like an alien. I am not somebody who is just from another world. I’m a human being like everybody else,” Boskailo said. “And I’m asking everybody to see every person around you, regardless of the color of their skin, coming from Africa, Asia, Europe, South America, anywhere, see them first as a human being.”

“Believe me, all of us we have our own story and we are coming from the place that we used to love and then somebody kicked us from.”