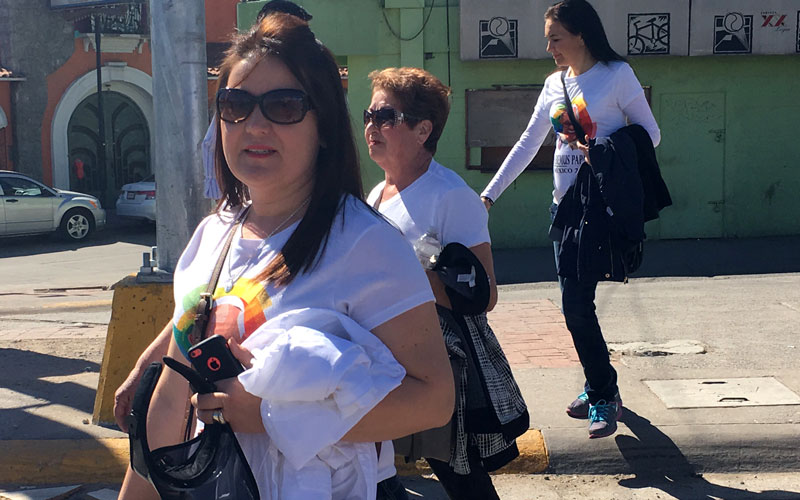 Members of the Hernandez family from Nogales, Arizona and Mexico arrive in Ciudad Juárez on the morning of Pope Francis’ Mass. The family of 11 had tickets to attend the Mass that afternoon. (Photo by Angela Kocherga/Cronkite News) 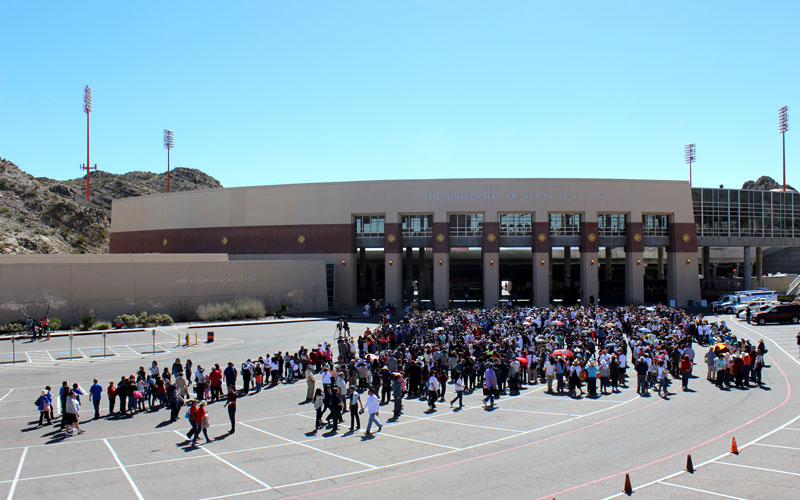 Thousands gathered outside the Sun Bowl at the University of Texas at El Paso on Wednesday. The crowd hummed with excitement for the live stream of Pope Francis’ Mass at 4:30.
(Photo by Molly Bilker/Cronkite News) 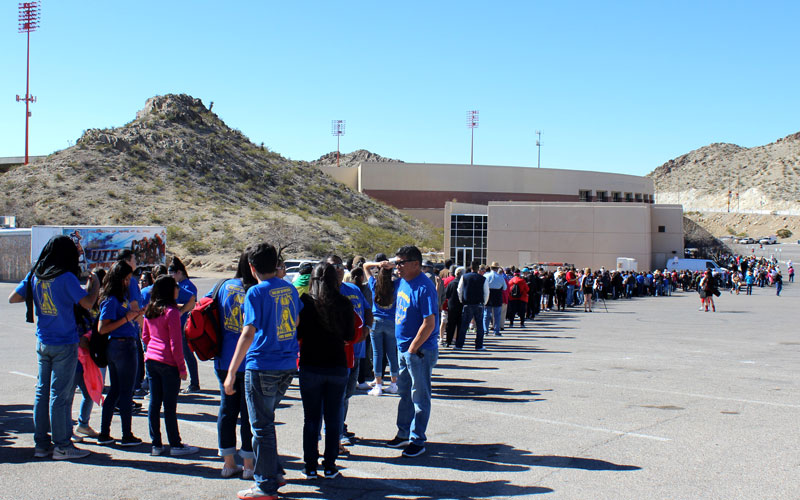 In the morning a couple hours before the stadium opened for attendees, a line of thousands snaked through the parking lot at the University of Texas at El Paso Sun Bowl parking lot. Many wore shirts or held signs for Pope Francis. (Photo by Molly Bilker/Cronkite News) 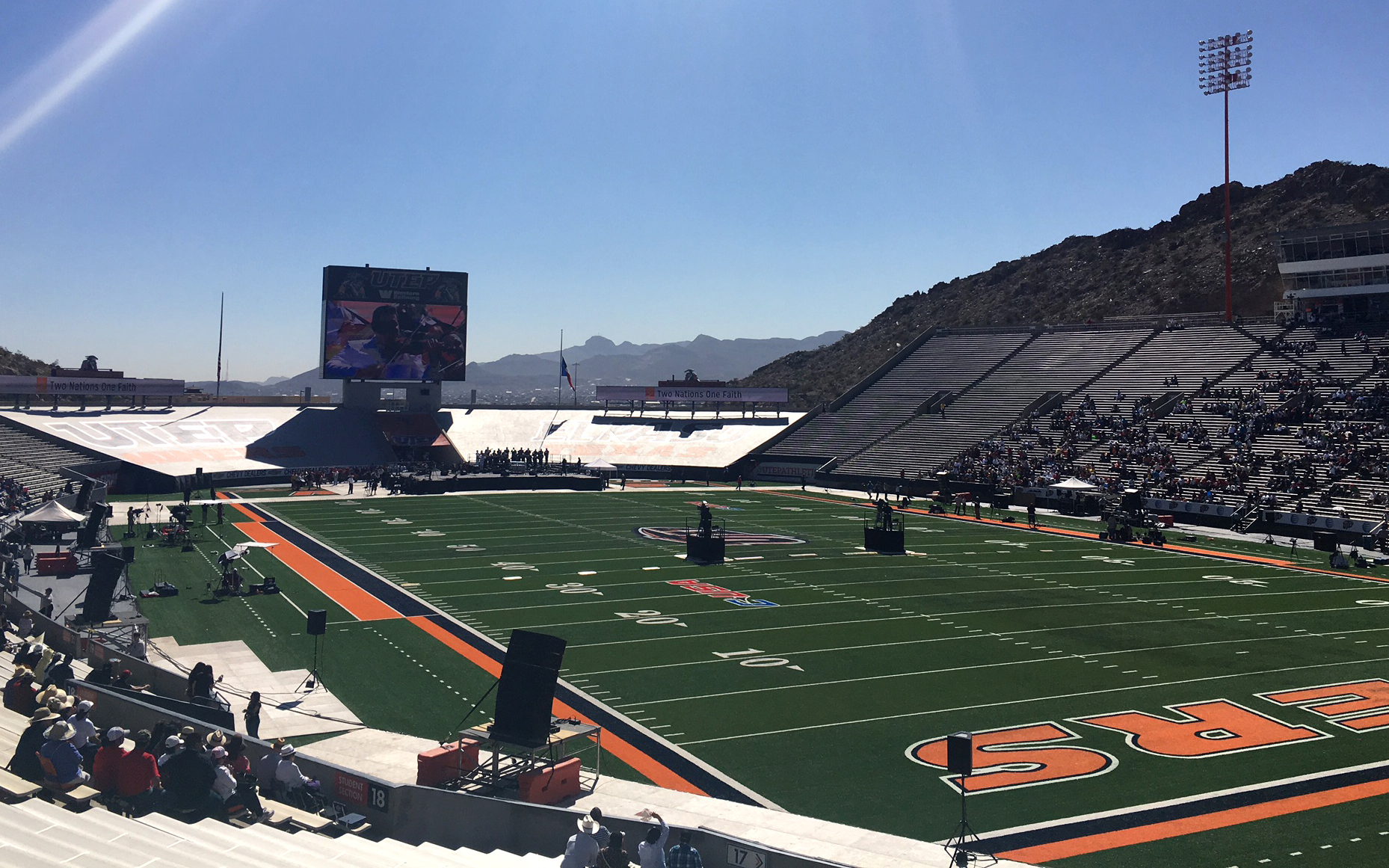 The University of Texas at El Paso Sun Bowl starts to fill up around noon, four and a half hours before the scheduled simulcast of Pope Francis’ Mass in Ciudad Juárez.
(Photo by Angela Kocherga/Cronkite News) 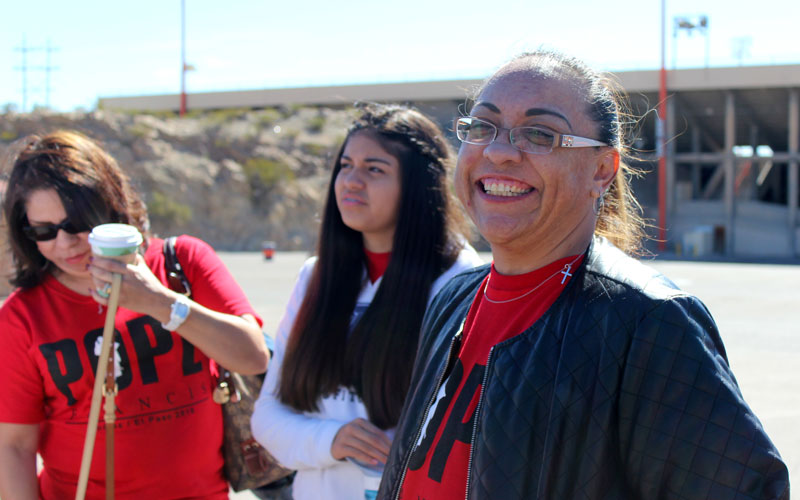 Helen Walker is an El Paso native who lives in north Phoenix. Walker is a cancer patient who went through a round of treatment Monday and attributes her ability to come out to the Sun Bowl for Pope Francis’ visit to the Holy Spirit driving her spiritually. (Photo by Molly Bilker/Cronkite News) 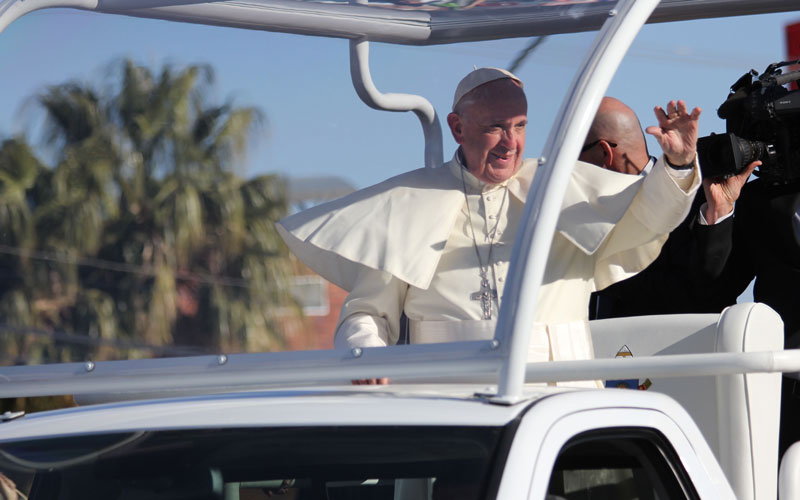 Pope Francis blesses the crowd as he drives down Manuel Gomez Morin Blvd. on his way to the border Mass in Ciudad Juárez, on Feb. 17, 2016.
(Photo by Miguel Otárola/Cronkite News) 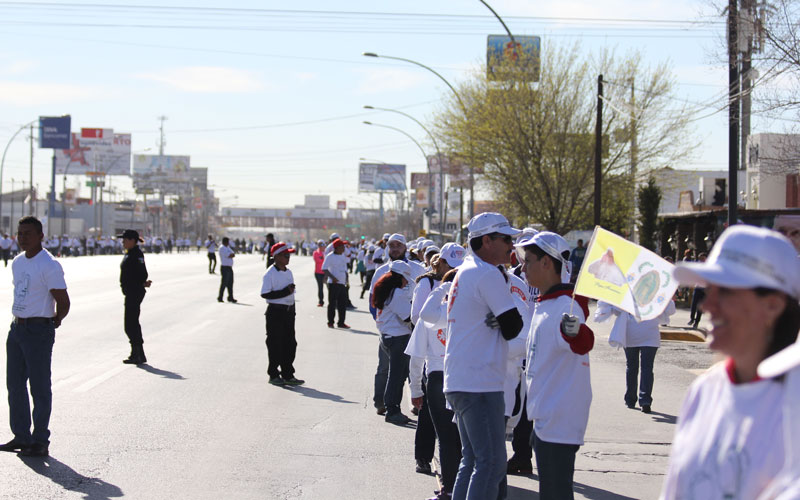 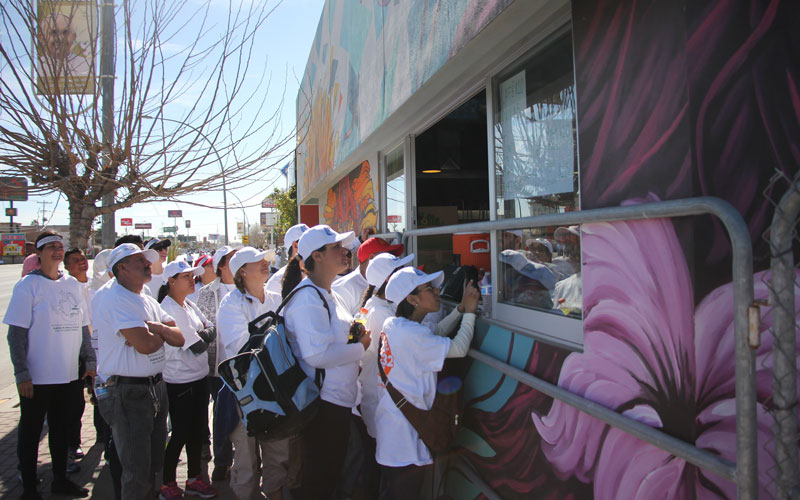 A group of “human chain” members look inside a restaurant to watch the television as Pope Francis arrives into Ciudad Juárez, on Feb. 17, 2016.
(Photo by Miguel Otárola/Cronkite News)

CIUDAD JUÁREZ, Mexico — In the slanting afternoon shadows between this city and its sister across the border, Pope Francis ascended a ramp built overlooking the levee of the Rio Grande and blessed the U.S. and its people, including migrants and refugees.

Bowing his head, hands together, Francis blessed several crosses representing the estimated 6,000 migrants who died in the past 20 years crossing the border. He lifted his head, looked out toward El Paso and made the sign of the cross with one hand — extending his blessing across the border, from Mexico to the United States.

What we learned: Reflections on El Paso- Juárez from the Borderlands team

The moment was poignant and comes as Republican presidential candidates hotly debate the issue of immigration and border security, with leading candidate Donald Trump calling for the building of a “beautiful” wall to further separate both countries and protect the U.S. from what he’s called “murderers” and “rapists” and drug smugglers.

He implored, “No more deaths … exploitation…there’s always time to change … This is a time for mercy.”

The ceremony was a binational event, with Francis thanking “brothers and sisters in El Paso for making us feel like one family and one Christian community,” looking at a camera that beamed his words across the border to the University of Texas at El Paso’s Sun Bowl. There, Francis’ blessing and Mass were broadcast live for those who could not be present in Juárez. As the pope extended his blessing toward El Paso, a cheer rose through the Sun Bowl.

The blessing was the culmination of a six-day trip that brought Francis through some of the cities in Mexico most heavily affected by inequality, poverty, corruption and violence.

For much of the past decade, Ciudad Juárez has been a face of every one of those issues the pope addressed during his journey through Mexico. On Wednesday, more than 500,000 people packed the city streets and fairgrounds, cheering and chanting, in hope of receiving a blessing from Francis.

Among the worshippers was Ana Berta Hernández, 64, from Nogales. She and her 10 relatives — one of whom is an Arizona State University graduate — were visiting from Nogales, from both the Arizona and Mexico sides of the border city.

“We are here to pray with Pope Francis for peace, unity for our border communities,” Hernández said. “To ask on behalf of many people who entrusted us to make requests for them that there be no violence and for peace around the world.”

The celebration was palpable throughout the border metroplex. In El Paso, crowds surged through the Sun Bowl, buying $10 Pope Francis T-shirts or listening to the sounds of the El Paso Youth Symphony Orchestra. The 50,000-capacity Sun Bowl stadium was half filled only minutes before Mass on a warm winter afternoon, with attendees clapping and singing in anticipation.

Jovanna Talavera, 18, moved to El Paso from Peoria during summer 2015. She hoped Francis’ Mass, which would cover issues such as immigration between the U.S. and Mexico, could teach Arizonans to be more tolerant of immigrants given the racism and anti-immigrant policies she’d witnessed while living there.

“It’ll help people over there understand that OK people actually do come over here and try to help the country,” Talavera said. “When I lived over there, there were a lot of racist people, and if they hear maybe the pope talking about it, they’ll be less inclined to make judgments.”

Helen Walker, 45, was a cancer patient visiting the Sun Bowl event from north Phoenix. Walker felt her faith had given her the spiritual energy to make the journey from Arizona.

“I feel that what I’m going through is physical,” Walker said. “Spiritually, through the Holy Spirit, he’s the one who keeps moving me.”

Locals on both sides of the border hope Francis’ visit will help eliminate negative perceptions of the El Paso-Juárez region as a hub of violence and fear, said University of Texas at El Paso economics professor Tom Fullerton.

“That will potentially help restore investment, commerce, and economic activity,” Fullerton said in an email. “All of the cartel-related violence of those years truly damaged the collective image of the region.”

For both cities, Francis’ visit is a reason to finally celebrate after those rough years, said El Paso City Representative Peter Svarzbein.

When Francis landed in Juárez from Mexico City Wednesday morning, members of the so-called “human chain,” who would later link arms along Manuel Gómez Morín Boulevard where the pope would pass, left their posts and huddled to look at the televisions inside shops and restaurants.

Many of these people, representing factories, parishes and cities as far away as Guadalajara, had been here since 5 a.m. They were lined up along the entirety of the boulevard.

Francis and his Popemobile rolled through one of Juarez’ main boulevards, wearing his white coat and gently blessing the lively crowds. He greeted those lined up along the street. The vehicles in his entourage rolled at a quick pace on their way to eat lunch, their last stop before the Mass by the border. The moment was over as soon as it started.

“I’m very happy, my heart keeps beating,” said Juárez native Paola Trespalacios. She said she had teared up as he passed. “I’m very fortunate that he gave us his blessing.”

While Francis’ message of unity between El Paso and Ciudad Juárez speaks closely to the two cities, his larger messages about immigration resonate across the entire border. And El Paso and Juárez residents alike have welcomed his visit that has the opportunity to change the country’s perceptions of the region.

“For history, I don’t think we’ll ever be able to see this again,” said Juárez native Norma Gonzalez. “But the pope has a home here when he wants to come back.”