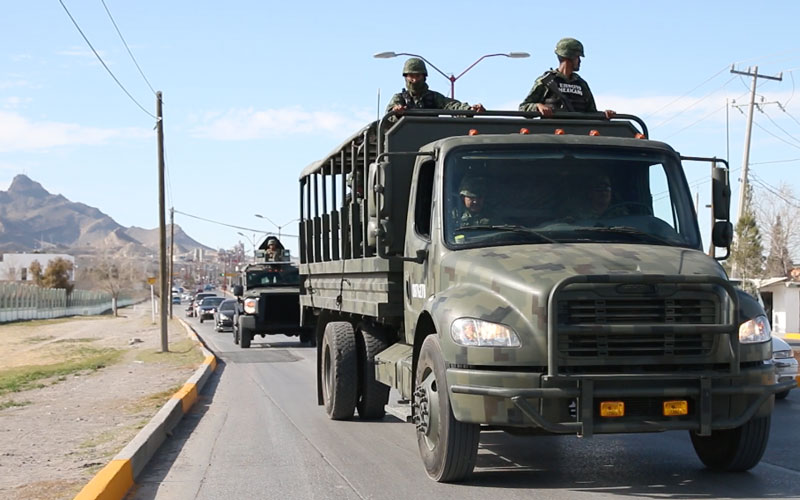 Multiple military officers patrol Ciudad Juárez in the days prior to Pope Francis’ visit to the city.
(Photo by Cammeron Neely/Cronkite News)


Similarly, across the border in El Paso, residents awoke Wednesday to the sound of airplanes and helicopters flying over the Sun Bowl where thousands are expected to hear Pope Francis’ final Mass streamlined from Ciudad Juárez.

In Juárez, news outlets report that 15,000 extra police from throughout Mexico were tasked to come to Juárez, once one of the most dangerous cities anywhere, before and after Francis’ visit here. That estimate is certainly visible — it seems that at every corner there are multiple officials with rifles or machine guns at hand.

Security includes local, state, federal police, along with military troops, special-operation teams and the presidential guard. Of course, the pope’s own security team will be here, too.

Outside a supermarket near Francis’ city route, different uniforms signifying different types of law enforcement are visible. A soldier I spoke to on the condition of anonymity next to the market was from the central state of Michoacan, a rifle slung on his shoulder. He attributes the added security to ordinary protocol, but also to the past violence that Juárez is still healing from.

There has been no particular threat, he says. It’s just the precautionary measures taken when the leader of the Catholic Church comes to your city.

His particular group has been in the city for three days now. Soldiers rest by the fences on the route Francis will take. Others bring large bags with food for their partners as the sun sets. They wait for the big day — as does the rest of Juárez.