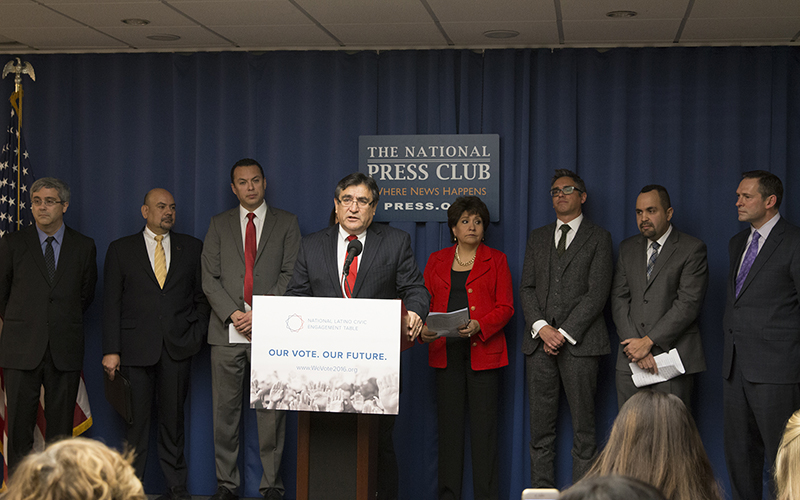 Ben Monterroso, executive director of Mi Familia Vota, said at a Washington event that few Republican candidates in the presidential primaries have done a good job of reaching out to Latino voters. (Photo by Madison Alder/Cronkite News)

Maricopa County Sheriff Joe Arpaio, who endorsed Donald Trumps’ campaign for the GOP presidential nomination, said he doesn’t believe there is “much movement to vote against Trump in the Hispanic crowd.” (Photo by Ben Margiott/Cronkite News) 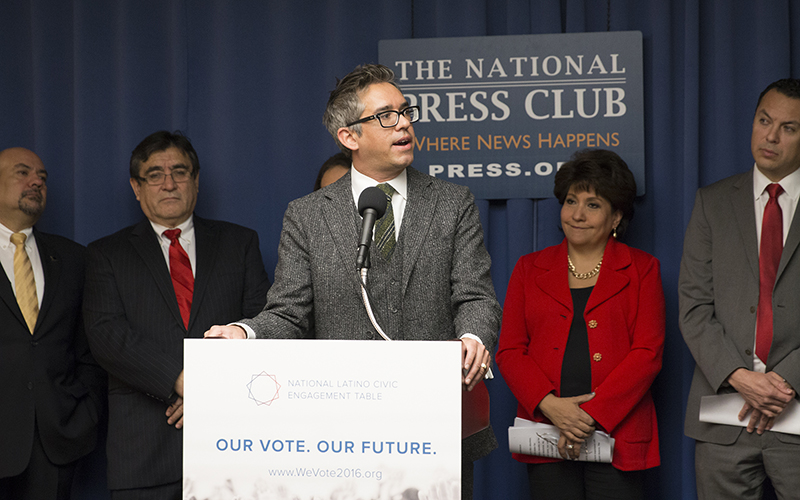 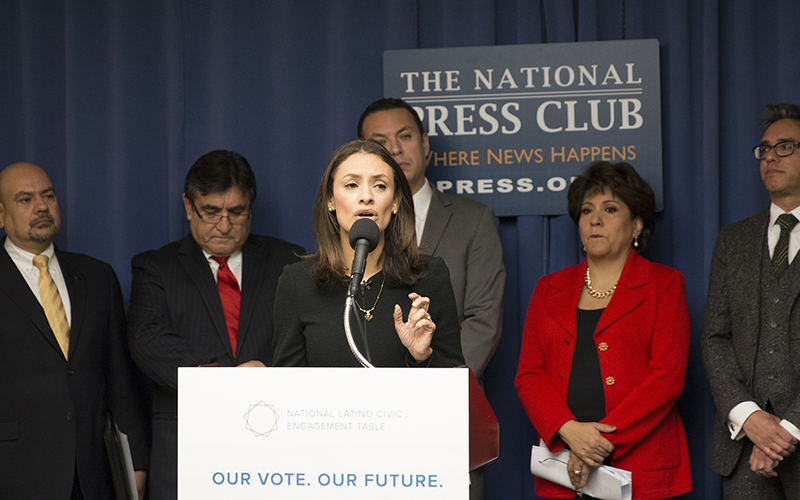 Maria Teresa Kumar, president and CEO of Voto Latino, joined leaders of eight other Hispanic advocacy groups who said the vote of millions of Latinos will have a powerful impact on the 2016 elections. (Photo by Madison Alder/Cronkite News)

WASHINGTON – Latino groups looking to help Hispanics flex their political muscle this election said that job is being made easier by rhetoric from people like Maricopa County Sheriff Joe Arpaio and GOP presidential hopeful Donald Trump, among others.

His was one of nine organizations that gathered Wednesday in Washington to outline plans to mobilize the millions of Hispanic voters whose strength they said will start to be felt in presidential primary votes on Saturday in South Carolina and Nevada.

Those are “really the first two states that actually demonstrate the diversity of what America is – the actual electorate,” which is why votes this weekend will be better reflect the nation, said Maria Teresa Kumar, president and CEO of Voto Latino, one of the groups at Wednesday’s event.

“For the American Latino community, it (Nevada) is also the first state that has a significant muscle that says, ‘Not only are we a swing state, but we are going to participate,'” Kumar said.

Arpaio, who endorsed Trump’s candidacy, said he didn’t know how their rhetoric on immigration might affect Trump’s presidential bid, but added that “we’ll know in Nevada.”

He said he does not “see much movement to vote against Trump in the Hispanic crowd” and “they typically don’t vote in the primary.”

As for the claim that he is helping mobilize Latino voters, Arpaio conceded that, “My position on illegal immigration has been somewhat controversial and it has drawn out many activist groups against me.”

Those “somewhat controversial” statements were a focus of many of the speakers at Wednesday’s event.

Alex said that Trump “attacked our community on day one of his campaign,” pointing to the business mogul’s statement that accused some immigrants who are here illegally of being rapists and murderers. Likewise, Alex said, Arpaio has “attacked and damaged our community for years.”

That was echoned by Mi Familia Vota Executive Director Ben Monterroso, who charged Arpaio with “attacking our community” in a way that is not enforcing the law, and discriminating against the Latino community.

“They’re betting that, number one, they don’t need us and, number two, that we’re not going to participate,” Monterroso said.

“They do need us,” he said. “There is no presidential candidate that can get the White House without the Latino vote.”

Kumar said there is “an opportunity for the right candidate to capture the hearts and minds” of the voters who voted for George W. Bush. She said he captured enough of the Hispanic vote that they “secured the White House for him.”

“If there’s a candidate that can actually appeal to that particular angle of voters, I think that it allows them to be primed for the national stage,” Kumar said.

This election has a lot of “complications and implications” for Latinos, said Monterroso, adding that few candidates are doing much to attract Hispanic voters – not just Trump. Republican Sens. Ted Cruz of Texas and Marco Rubio of Florida, “everyone is running away from issues that matter to our community,” he said.

In the meantime, Kumar said, “It is an understatement that the Latino community has been beaten up in the press.”

Arpaio said he wants to go to Mexico to meet with officials there and talk about border issues like illegal immigration and drug trafficking, but that his requests have gone unanswered – much like his recent request to see the pope during the pontiff’s visit to Mexico.

“OK, let’s go to Mexico and talk about the drug problem and immigration,” said Arpaio to his critics.

“And I would love Donald Trump to go with me,” he said, before adding with a chuckle, “I’d get a free plane ride out of it.”