With Pope Francis coming to celebrate Mass in Ciudad Juárez, both sides of the border anticipate his arrival. (Photo by Cammeron Neely/Cronkite News) 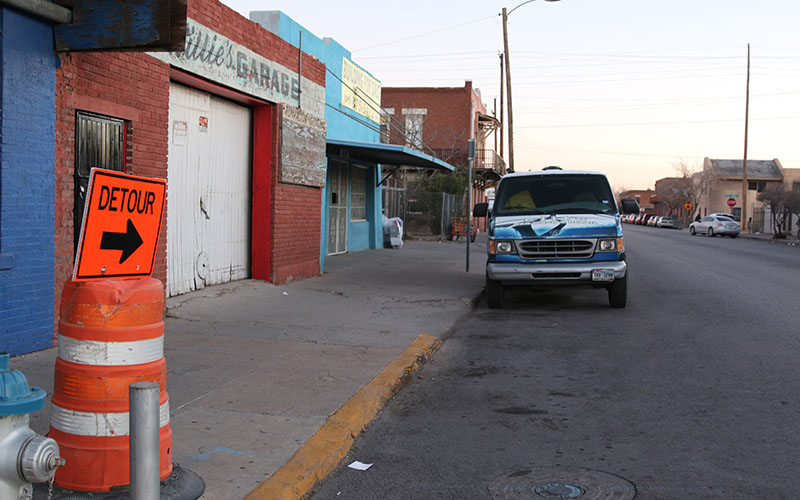 A detour sign was put up on the side of a road in Segundo Barrio to direct traffic in the proper direction prior to the Pope’s visit Wednesday. (Photo by Chloe Nordquist/Cronkite News) 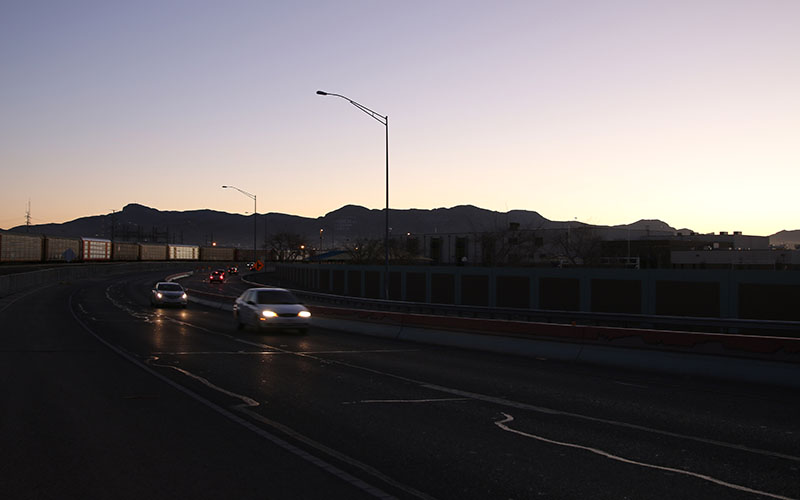 The section of Texas State Highway Loop 375 below Segundo Barrio will be shut down during the Pope’s visit on Wednesday. (Photo by Chloe Nordquist/Cronkite News)

EL PASO, Texas — While crowds across the border in Ciudad Juárez are almost too dense to navigate, the streets here remain quiet — perhaps too quiet — only hours before Pope Francis celebrates Mass.

The large crowds that were anticipated when Francis’ visit was announced nine weeks ago haven’t materialized. So far, some hotels are facing occupancy rates as low as under 10 percent.

“They say so many people will come, but I doubt it,” said Victor Bhakta, owner of the Best Western Sunland Park Inn in west El Paso, blaming potential visitors being scared away by stringent security measures and claims that hotels would be overbooked. “That’s why we are hurting.”

The city’s security measures are estimated to cost around $1 million and, for critics like El Paso City Councilman Peter Svarzbein, run directly against the “Two Nations, One Faith” theme, which is central to Francis’ Wednesday speech. Rather than uniting the two communities, the security measures create a split between the border region and the two countries, an image El Pasoans have been fighting to improve.

“Border communities are different communities, and it’s a symbiotic relationship,” Svarzbein said. “Here’s an opportunity to show our cities united, and that seems to not be able to be done, not possible.”

The security measures include closing schools and restricting vehicles from entering the border area where visitors might have had a chance of seeing Francis. That area includes approximately 65 square blocks of the historic neighborhood Segundo Barrio.

Patricia Marquez, who lives in Tucson, planned to go to Ciudad Juárez on Wednesday but ultimately decided not to leave home due to what she feared would be crowds around the border.

“I know the lines there are like, forever,” Marquez said. “I got a little scared about, ‘Oh my god, what if we get stuck over here, and we can’t cross the border in two days?’ It’s just massive amounts of people.”

On the U.S. side, a group of 450 unauthorized migrants and refugees known as “Francis’ VIPs” will be present at the border levee, said El Paso diocese chancellor Patricia López Fierro. The group is vetted by U.S authorities.

Meanwhile, city officials said security concerns such as large crowds of people surging toward the fence outweighed the potential for viewers from the U.S. to get a small glimpse of Francis.

“The location where the papal Mass is taking place is immediately on the U.S.-Mexico border, it’s not really very visible from the U.S. side,” said Bryan Crowe, general manager for Destination El Paso. “For safety concerns, we obviously wanted to have folks not get injured through an uncontrolled mass gathering.”

El Paso Times managing editor Ramon Bracamontes took issue with the measures, writing, “When Pope Francis turns to walk and look toward El Paso, he will see empty streets. Pope Francis’ visit to this area is not a civil rights protest, nor is it a march. It’s just a chance for people to pray.”

The El Paso diocese has organized a simultaneous live two-way screencast of Francis’ Mass at the Sun Bowl at the University of Texas at El Paso so those in the city can still see him. While attendees may not see Francis in person, he will be blessing all those in attendance, which is nonetheless an “unbelievable” experience, said Ray Niblett, deacon for Our Lady of the Valley Parish.

Though the Sun Bowl is not sold out, ticket sales have been steady, and the diocese is hoping to fill the stadium with a capacity of 50,000, Fierro said. The diocese also handed out free tickets for the Sun Bowl on Monday in the Segundo Barrio neighborhood.

In some ways, the situation is similar to when Francis visited Philadelphia in September. There, businesses faced a decline in customers because security measures enacted were so strident that residents chose to leave the city during Francis’ visit or didn’t want to leave the spot they’d found once they made their way through security, said Kevin Vaughan, a retired Philadelphia city government official.

“At first we were all told that it would be great for the restaurants, people would be coming to town and there would be lots of commerce going on, and all sorts of things,” Vaughan said. “And then we started hearing rumors about what the security was going to be like.”

Vaughan spent the weekend in Canada to avoid the security, while restauranteurs he knew lost business and his neighbors who stayed in town said the streets were empty.

In El Paso in the days leading up to Francis’ Mass, none could speak to estimates of how many people may actually come through the city. Roger Maier of U.S. Customs and Border Protection said the agency will be keeping all lanes open but cannot estimate how many people they expect to cross the border — just that they’re preparing for a “significant increase.”

The possibility that visitors will bypass El Paso entirely is a challenge to the hopes many have that this event will lift the status of this region.

“If we’re scared of the border, how can we expect anyone else not to be?” Svarzbein said.