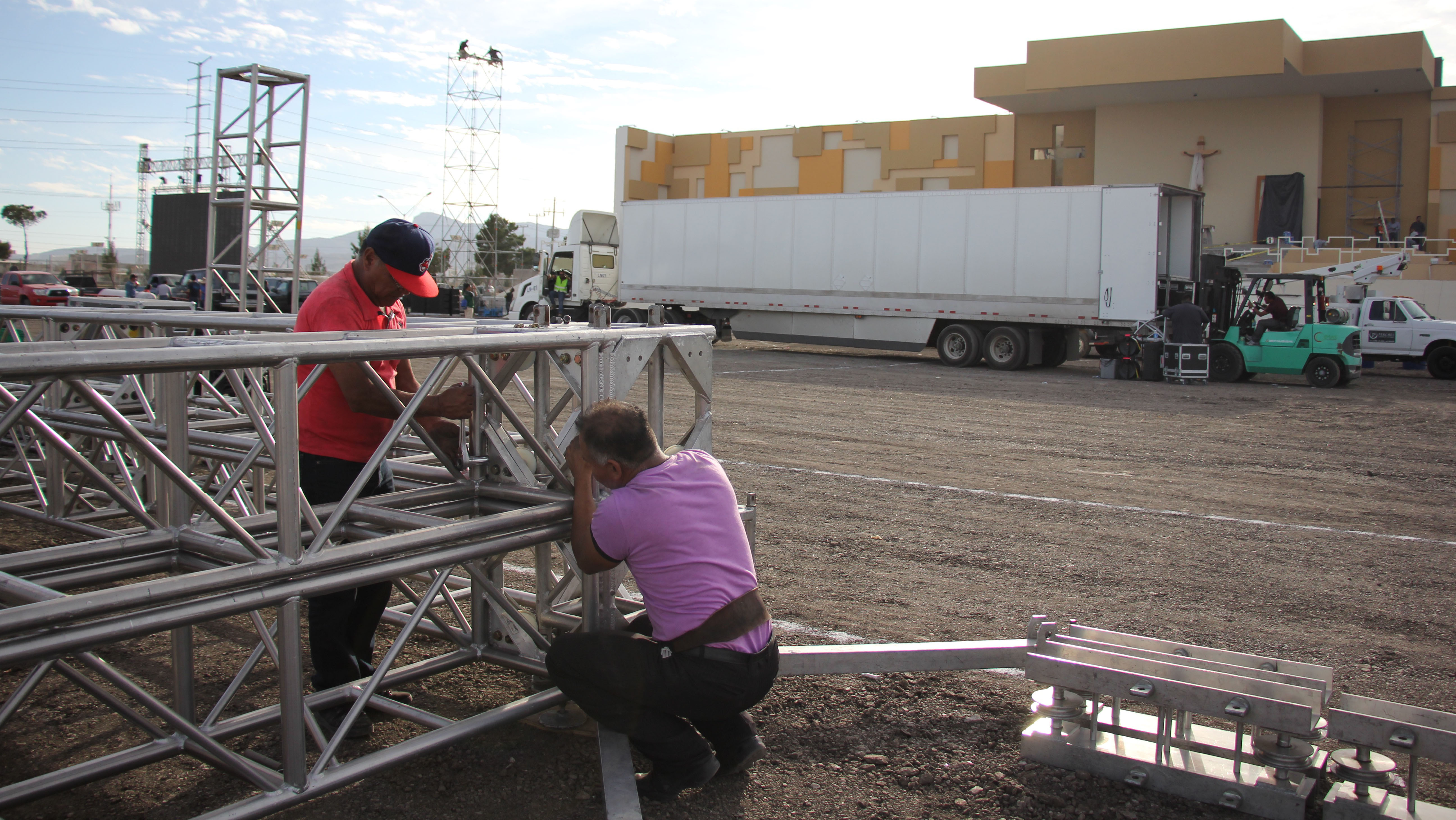 Construction workers build metal support structures in front of the stage of the mass as the sun sets in Ciudad Juárez on Feb. 13, 2016. (Photo by Miguel Otárola/Cronkite News) 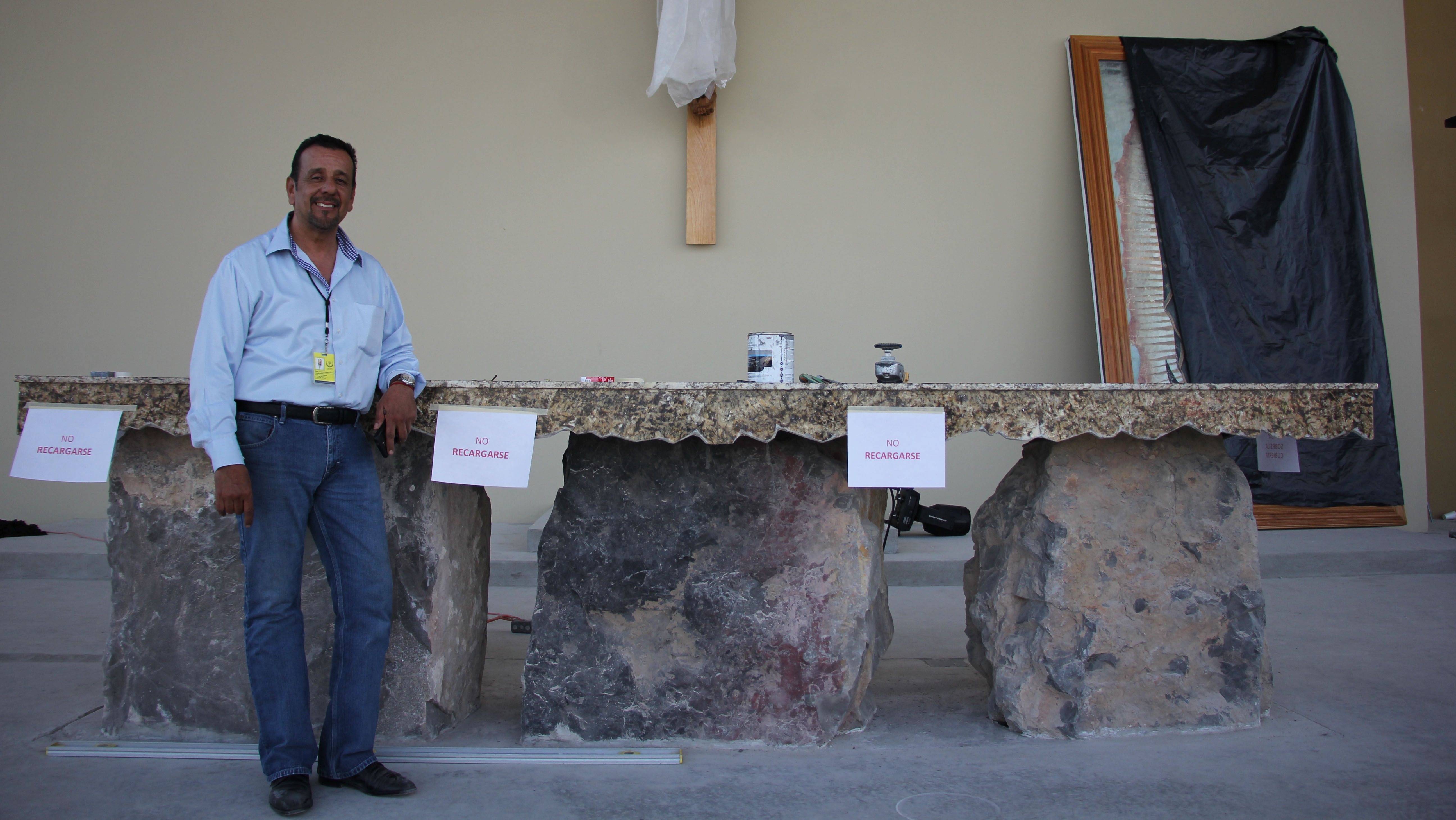 Omar Joaquin Acosta Camacho, 53, stands next to the altar his team at Perches Funeral Homes built. Camacho calls building the altar top the biggest assignment of his life so far. (Photo by Miguel Otárola/Cronkite News) 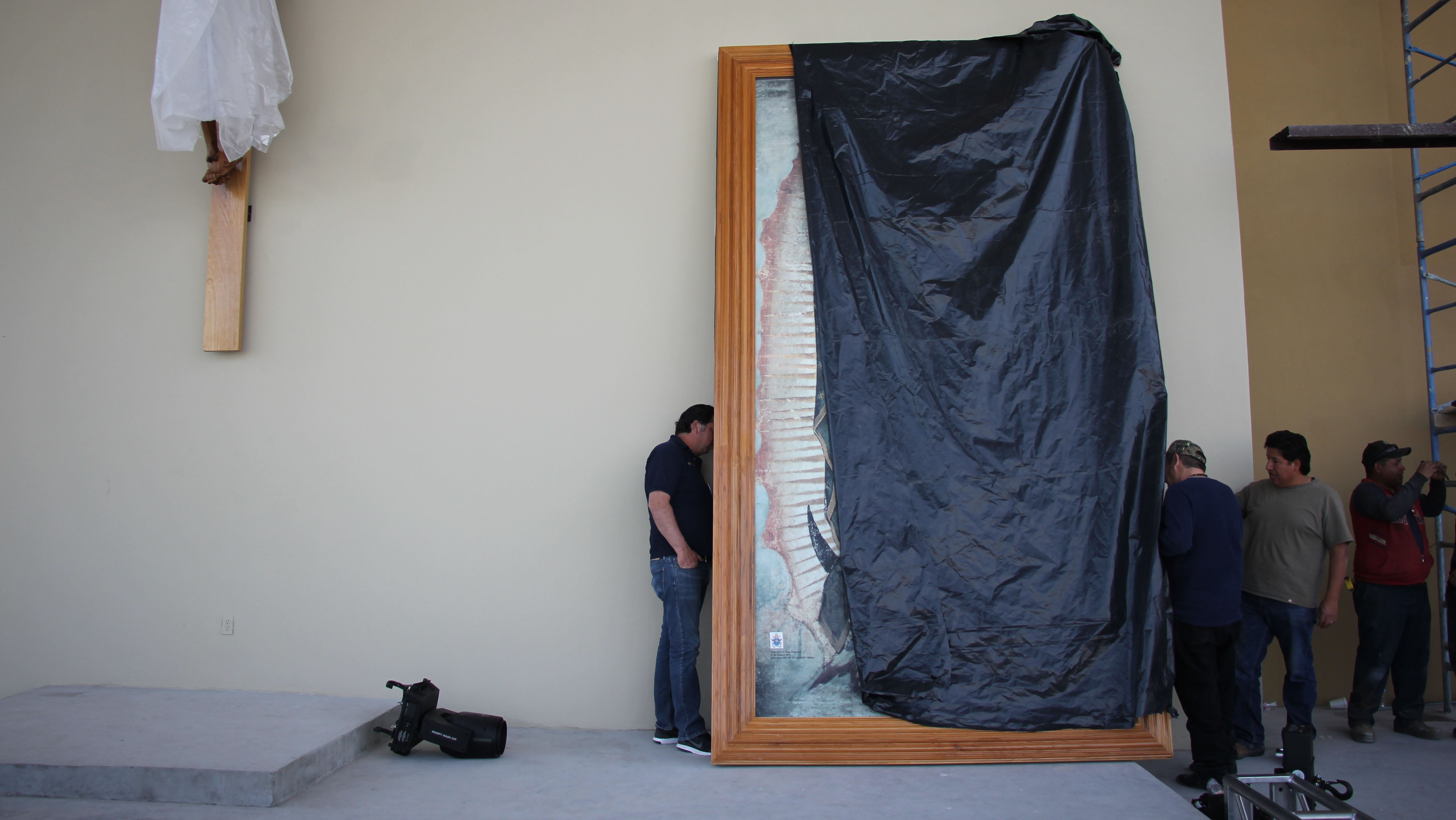 Workers inspect the portrait of Our Lady of Guadalupe on the mass stage on Feb. 13, 2016.
(Photo by Miguel Otárola/Cronkite News) 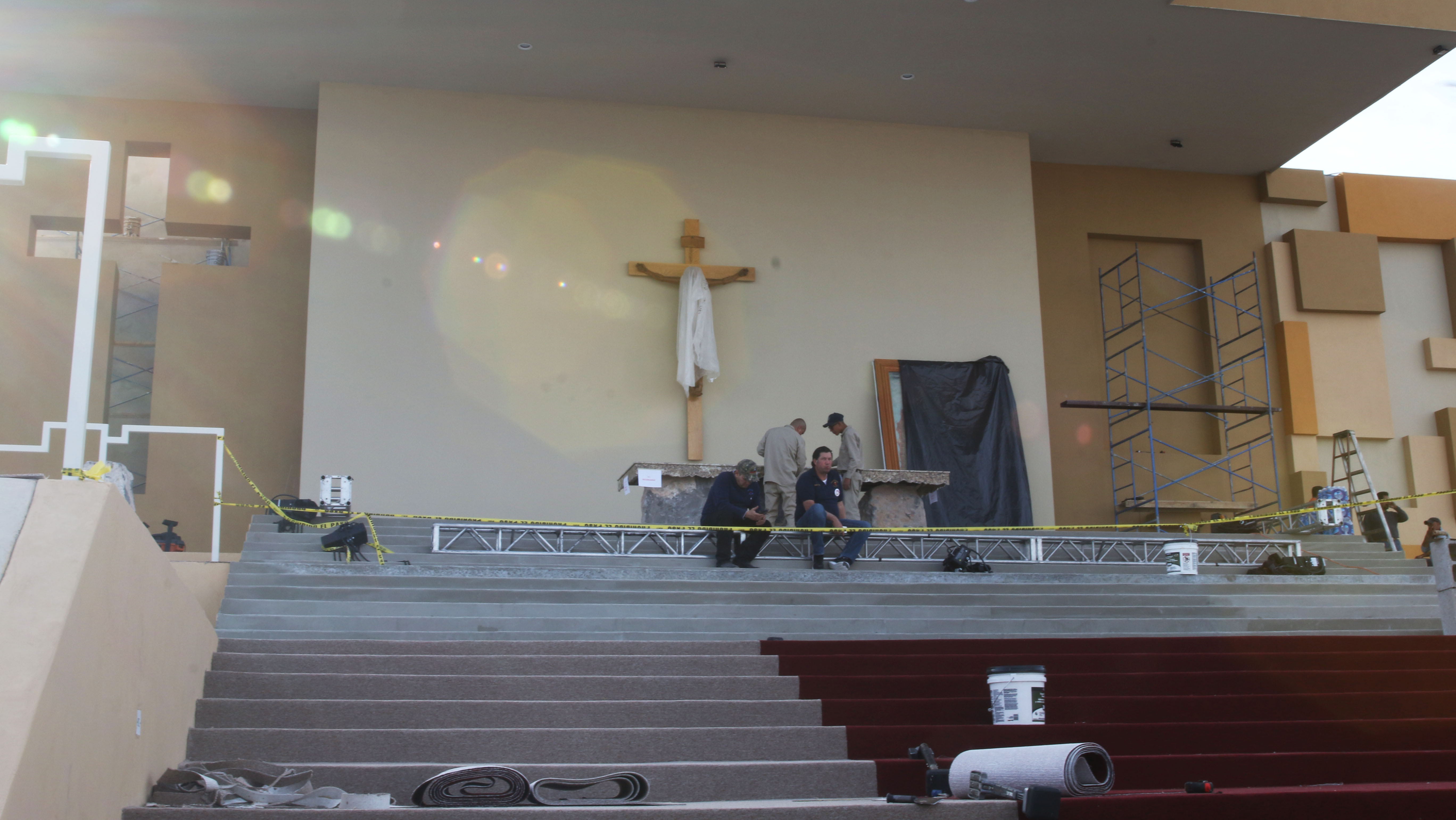 The stage where Pope Francis will hold an open-air mass on Feb. 17.
(Photo by Cammeron Neely/Cronkite News)

CIUDAD JUÁREZ, Mexico — The sights and sounds at the stage for Pope Francis’ Wednesday Mass on the border are an assortment of what comes with hurried construction.

The preparation effort is an international affair, with workers from among cities and countries, Boston, Las Vegas, Italy, and Mexico here to provide expertise and ensure all is set for Francis’ final Mass before he departs to Rome.

As two impatient workers from Nashville, Tennessee said, this is just like any other entertainment gig: Long bursts of laborious work paired with a whole lot of sitting around and waiting. They screwed nails to build metal scaffolding for the arena’s sound system. Others scraped beige paint on the steps leading to the altar. A group rolled a red carpet where Francis will soon step. People spoke over the phone, commandeered forklifts or just paced and thought about their next move.

All this hustle was enhanced by the significance of the event: The leader of the more than 1-billion-member Catholic Church will give mass to more than 220,000 worshippers from this stage and thousands more on the U.S. side, including unauthorized migrants and refugees standing just feet away on the U.S. side of the border.

Some say they may need a miracle to finish; If so, they’re in the right place.

Outside the stage, curiosity and anticipation was palpable. Vehicles on the highway slowed down as they passed to get a brief look at the chaos inside. Many took out their smartphones and clicked pictures. Their first sight: a row of black police ATVs and pickup trucks with local and federal policemen manning turrets on the beds. The security is a remnant of the violence that plagued Ciudad Juárez less than a decade ago and a glimpse of the massive security that will be on hand for the pope.

A few feet away, carpenters worked furiously to prepare the altar from where Pope Francis — some 50 yards from U.S. soil — will bless the United States and pray for the 6,000 migrants who died trying to cross the border.

Already, Francis has touched on Mexico’s drug-trafficking violence, political corruption, wealth inequality, cultural diversity and the thousands of missing — and that was just over the weekend in Mexico City and the state of Mexico. On Monday, Francis travels to Chiapas to perform mass and is expected to speak about indigenous rights.

For now, the environment in this Juárez arena felt starkly ordinary compared to what’s expected during mass. Jesus lay on the cross behind the altar. His head was covered by a torn strip of construction plastic. People posed next to a grand portrait of Our Lady of Guadalupe, which stood more than two persons tall leaning against the wall. Sanding tools and electrical tape rested on the altar where Francis will perform the Eucharist.

Omar Joaquin Acosta Camacho, 53, was in charge of building the altar top, which he and his team installed Saturday. Camacho is the operations manager for the marble division of Perches Funeral Homes, which prepared bodies of victims from both sides of the border during the height of the violence. A team from Perches started working on the altar and other stage structures six weeks ago. The total cost for their work? Between $20,000 and $25,000.

“This was an honor for us to be able to build this altar for such a beautiful and delicate event like the coming of Pope Francis to Ciudad Juárez,” Camacho said in Spanish. It’s the biggest assignment of his life so far, he added — as such, he arrived at 7:30 a.m. Saturday morning and showed no signs of leaving as the sun set behind the stage walls.