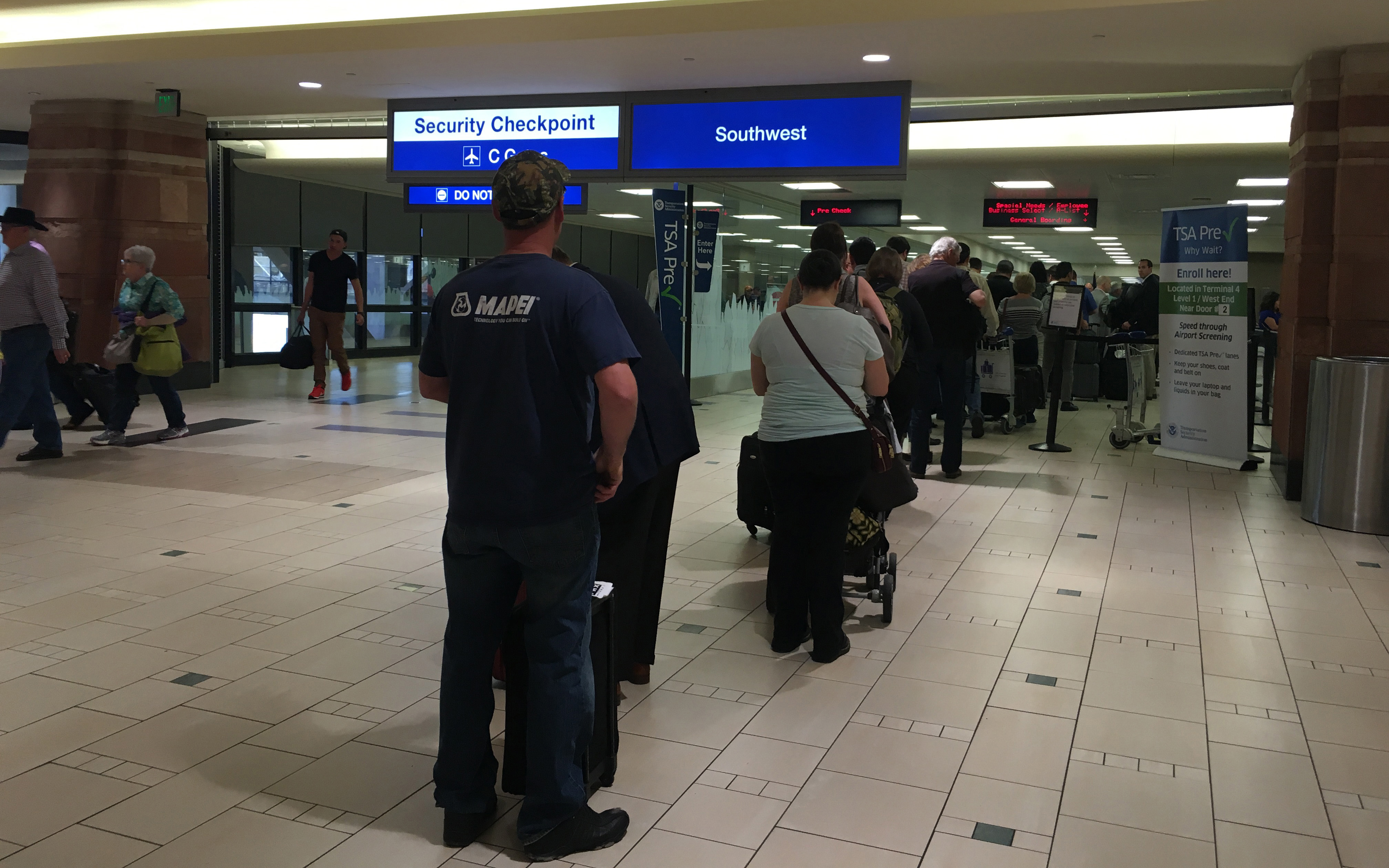 A spokesman for the Transportation Security Administration said lines at Phoenix Sky Harbor International Airport are usually less than 10 minutes, but they have “anomalies.” (Photo by Chloe Nordquist/Cronkite News) 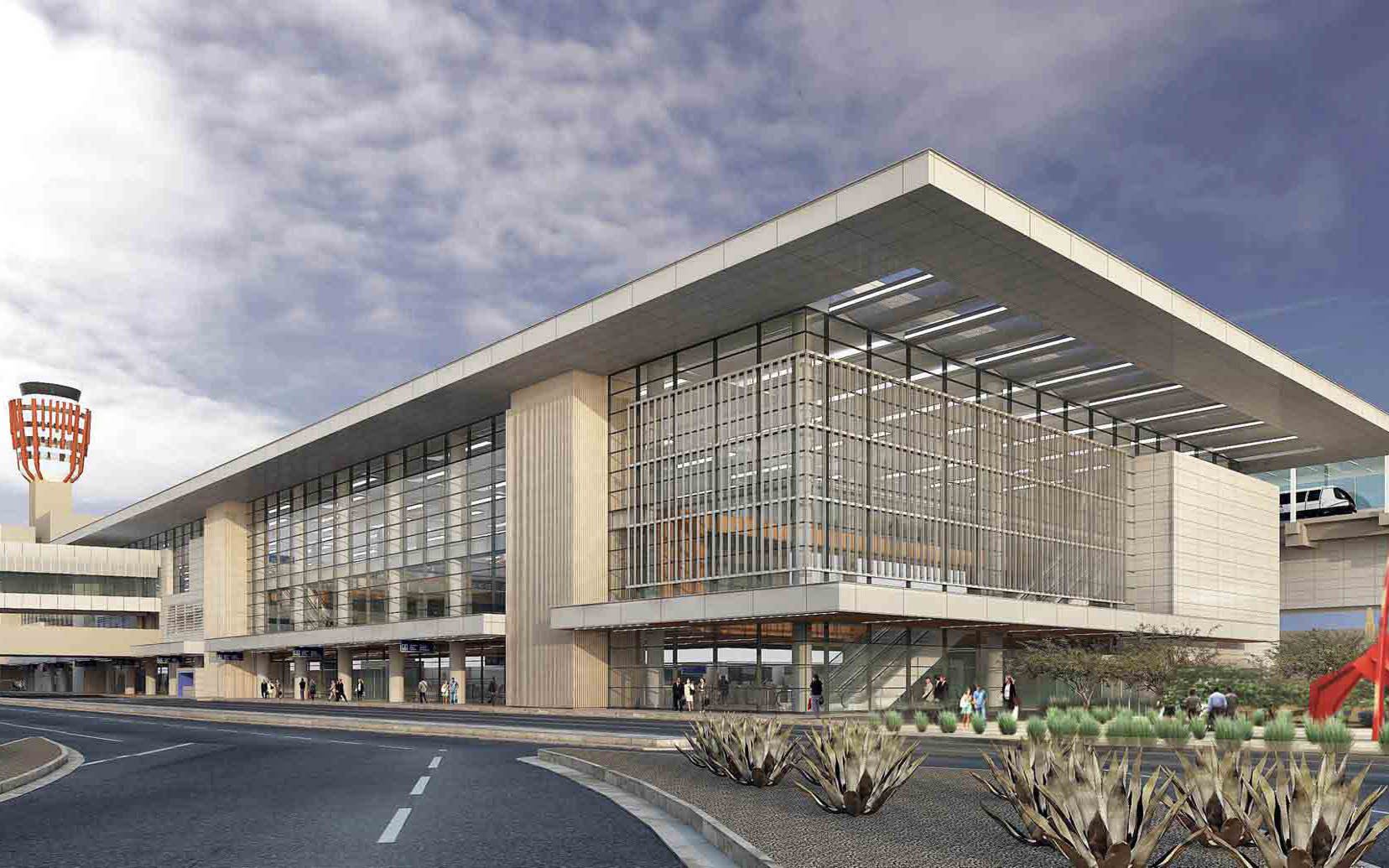 “We had increases month after month, so it was a very positive year,” airport spokeswoman Julie Rodriguez said. The airport’s previous record was nearly 42 million passengers in 2007, a record set before the Great Recession.

Frequent flyer Nick Gnat, a freelance trainer for display systems company Daktronics, said he noticed the increase in passengers, especially during early mornings and late nights when security backed up because lanes were closed.

“There are longer lines, for the most part, than I’ve experienced in the past,” Gnat said.

He also said he noticed more pressure on airlines to pack planes with passengers.

“I think they are pushing really hard to have every plane jam packed,” he said. “You’re seeing a lot of pressure to route people such that every flight is always full all the time. So as a result, you see a lot of backup.”

The airport also set a monthly record in March when it saw 4.2 million passengers. The busiest day was Feb. 4 2015, the day following the Super Bowl in Glendale.

The airport is one of the 10 busiest in the nation with a $79 million daily economic impact, according to the airport’s website.

The city of Phoenix and Sky Harbor are working with the Transportation Security Administration and other business partners to prepare for larger crowds and surges in traffic in the coming months.

“Typically, the lines are less than 10 minutes. But, of course, we have anomalies,” TSA spokesman Nico Melendez said. “A couple times during the holidays, wait times reached the 30-minute range. Every lane was open, but there’s a lot of passengers.”

Melendez said one thing travelers can do to make the security process more efficient is to be prepared. Last year, TSA data showed that Sky Harbor ranked No. 4 for firearms found in airports.

“When a gun is found, we have to close the lane and that whole process takes time and that affects times,” he said.

Melendez estimated that about 1,000 TSA workers work at Sky Harbor. Every year, the administration reevaluates staffing at all airports – taking into account things like technology, number of lanes and procedures, he said.

“If there’s a need for more staffing, certainly we’d be more open to that,” Melendez said.

Rodriguez said she expects March to be the busiest month of the year.

“I have noticed a lot more people in the airport, and I’ve noticed that Southwest Airlines flights have been pretty crowded or full,” he said. “But Sky Harbor is pretty efficient about putting passengers through TSA.”

As for pilots and crew members, Tofil said he thought the process has been just as efficient as usual. “They do a good job with all the crew members,” he said.

With the new year, Sky Harbor will make improvements and upgrades.

“We renovated all of our restaurants in our busiest terminal, Terminal 4, two or three years ago,” Rodriguez said. “Now, we are working on a full retail overhaul of Terminal 4.”

Terminal 4 serves about 85 percent of the airport’s customers. In addition to the overhaul of shops and services, Terminal 4’s international arrivals area also will receive improvements.

In Terminal 3, the airport is modernizing and upgrading. The project, which will cost an estimated $590 million, include a consolidated security checkpoint, new shops and restaurants and improved baggage claim. Officials said they expect the airport to finish the upgrade by 2020.

The airport does not use local tax dollars to pay for airport facility improvements, officials said. The bulk of funding comes from a fee tacked on to plane tickets and other businesses and services.

“All of the money to maintain these facilities comes from people who use the airport,” Rodriguez said.