San. John McCain, R-Arizona, had $5.1 million in his campaign bank account at the end of last year, well ahead of his challengers as he seeks a sixth term in the Senate (Photo by Angie Schuster/Cronkite News) 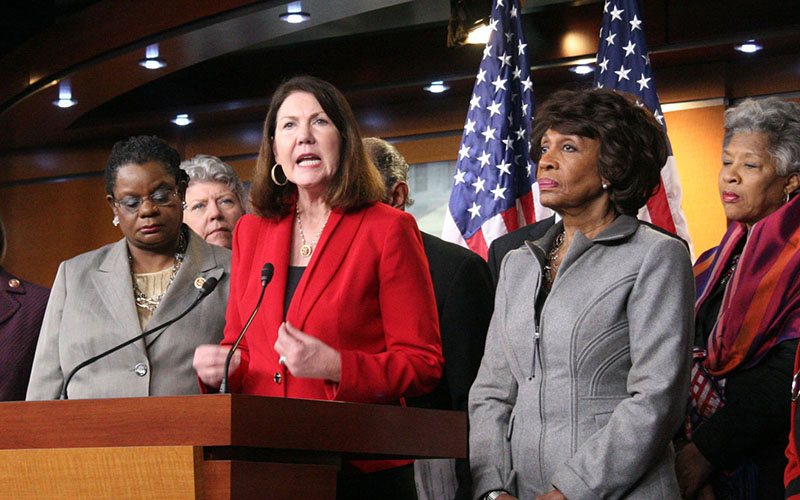 Rep. Ann Kirkpatrick, D-Flagstaff, raised just under $1.9 million in 2015 and had half that amount still in the bank on Dec. 31, according to FEC filings. (Photo by Michelle Peirano/Cronkite News)

WASHINGTON – Sen. John McCain raised and spent more in 2015 for his re-election bid than all 10 challengers combined, ending the year with $5.1 million in the bank, according to the latest Federal Election Commission figures.

The nearest in the fundraising race was Rep. Ann Kirkpatrick, D-Flagstaff, who brought in nearly $1.9 million and had $856,755 on hand as of Dec. 31, according to the FEC.

The challengers say they’re not worried about the funding disparity and that there are months yet before they have to face McCain, a five-term incumbent Republican. But political experts said that while it’s possible for an underfunded candidate to win, the challengers will likely have to pick up their fundraising games.

“Certainly, challengers will get outspent and still win,” said Kyle Kondik, managing editor of Sabato’s Crystal Ball at University of Virginia Center for Politics. But that’s the exception rather than the rule, Kondik said, noting that it takes money to get out the vote and to counter any negative advertising from the other side.

“And that’s borne out by McCain’s last race in which he was a little vulnerable but had overwhelming force in terms of the resources against (Republican challenger J.D.) Hayworth,” Rose said.

Eleven candidates have filed with the Federal Election Commission in the campaign for the Senate seat from Arizona, but only five had reported raising any funds for the race as of Dec. 31. Their totals for 2015 were:

McCain, who started 2015 with about $2 million already on hand, has an “enormous advantage,” Rose said.

“We’re very pleased with where we stand,” said Lorna Romero, a McCain campaign spokeswoman, adding that “the senator isn’t taking anything for granted.”

Kondik said Kirkpatrick may be on her way to challenging McCain, but the others need to do a lot more to pose a realistic threat.

A Kirkpatrick campaign statement said she posted the largest off-year fundraising amounts for a Democrat running Senate from Arizona,

“She’s raising an OK amount of money,” Kondik said of Kirkpatrick. “$600,000 last quarter is decent, but not eye-popping.”

“If Ward is going to really pose a threat to McCain, she needs to either raise more money or get outside help from conservative Republican groups,” Kondik said, adding that he hasn’t seen interest in those outside groups yet.

Ward’s campaign did not return requests for comment Thursday.

But with primaries still six months away, Republican candidates have some breathing room.

“We’re in this race running a marathon, not a sprint,” said Joel Frewa, campaign manager for Republican challenger Alexander Meluskey.

“We’re right on track where we should be,” Frewa said. “We’re not trying to match McCain dollar to dollar.”

Frewa said the campaign is focused on getting voters to the polls instead of fundraising. He said the media likes to tie a candidate’s viability to his fundraising, but “we’re literally not paying attention to any of that.”

Rose said there are other elements that can hinder a candidate with a fundraising lead.

“What Senator McCain needs to be concerned about is beyond fundraising,” Rose said. “And what I mean by that is who is at the top of the ticket in this election.”

Rose said it could be “catastrophic” for McCain if developer Donald Trump or Sen. Ted Cruz, R-Texas, ended up as the Republican presidential nominee. Likewise, he said, McCain would benefit if Sen. Bernie Sanders, D-Vermont, beats former Secretary of State Hillary Clinton.