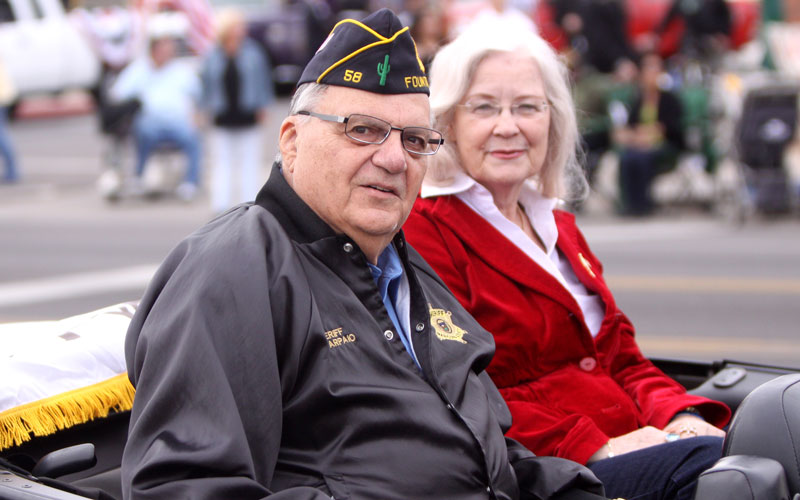 Maricopa County Sheriff Joe Arpaio and his wife Ava at the 2011 Veterans Day parade in Phoenix. Arpaio says he would like to meet with Pope Francis during his one-day stop in Ciudad Juarez. (Photo by Wikimedia Commons)

Catholics from all over Arizona and the Southwest are expected to travel there with the hope of seeing Francis along his route, which is capped by a public mass in Ciudad Juárez on Feb. 17.

Maricopa County Sheriff Joe Arpaio, in an exclusive interview with Cronkite News, said he’d like to meet with Francis, though has not made any specific plans yet.

The interview has been edited and condensed.

Cronkite News: What are your feelings on Pope Francis coming to Ciudad Juarez?

Joe Arpaio: First of all, I’d like to meet him, even though it’s in Mexico. I have 35 years’ experience on both sides of the border. And I bring that out because I’d like to meet with Mexican officials and give them my opinion of all those years of experience dealing with the president over there and the attorney general. Evidently, they’re a little concerned about me going, and they’re not too happy that I endorsed (presidential candidate Donald) Trump.

Cronkite News: If you could meet with the pope, what would you speak about?

Personally, I’m not overly concerned. For me, it would be worth the risk to meet the pope in Mexico.

Cronkite News: Are you trying to go there for his visit?

Arpaio: I’m not going to say what I am doing. I would like to do it. Let’s leave it at that right now.

Cronkite News: Trump’s policies of immigration and border security are much different from Pope Francis’ words of border solidarity between the two countries. Isn’t there contradiction between these messages?

Arpaio: No. I speak as a law-enforcement official, where you enforce the laws. The pope represents everybody. There’s a different situation there.

Cronkite News: What do you hope the pope says while he is in Ciudad Juárez?

Arpaio: I don’t know what the pope is going to say. I don’t speak for him, and we’ll see once he gets there what he will say.

Fifty-nine years I’ve been married, and as I say, my wife is not feeling too well. That would be another reason I would like to meet with the pope. My wife and my daughter are devout Catholics.

Cronkite News: Pope Francis plans to have a symbolic public mass along the U.S.-Mexico border, where people from El Paso could see. In another reality with a more divisive border, this wouldn’t be possible.

Cronkite News: Ciudad Juárez is trying to come back from a very violent period it faced around the turn of the decade. Do you notice a change in that area?

Arpaio: Well, they’ve had many murders there recently. I don’t know if that’s subsided now in the last year. It was a very dangerous place two or three years ago. My whole life, 55 years in law enforcement, I’ve been dealing with the drug traffic.

It wasn’t just illegal immigration — I’ve always been fighting the international drug traffic. The pope, I’m sure, will get into the drug-abuse situation. I’m almost convinced he will do that.

Cronkite News: Pope Francis spoke to Congress during his U.S. visit last year and said the country should treat immigrants coming into the country in the most humane way possible. Do you have any comments on that?

Like I say, it’s a very complex problem. It’s a diplomatic problem, it’s an enforcement problem, it’s an intelligence problem. It’s a political problem — I would put that on top. It’s very nice that he’s coming to Mexico, which is rather controversial when you deal with drugs, corruption and illegal immigration. He’s coming right in there, and I have to give him a lot of credit for that. Maybe something good will come out of his visit. That’s what we’re all hoping for.