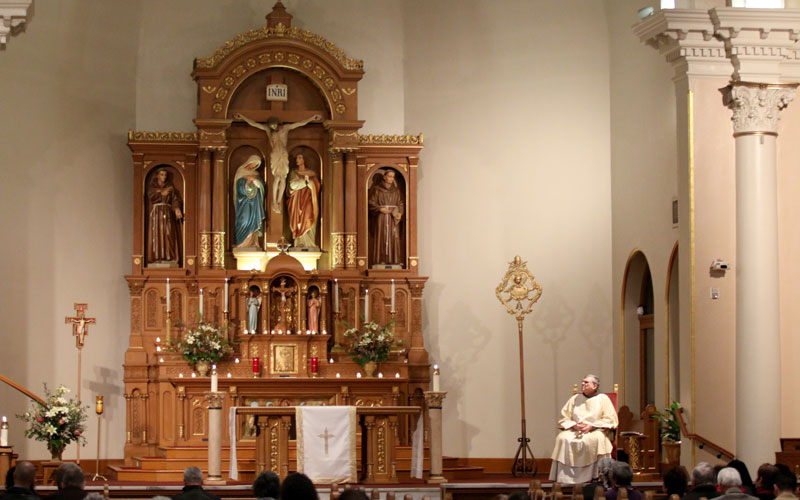 Parishoners at St. Mary’s Basilica in downtown Phoenix gather for the noon mass on Feb. 2. (Photo by Mauricio Casillas/Cronkite News) 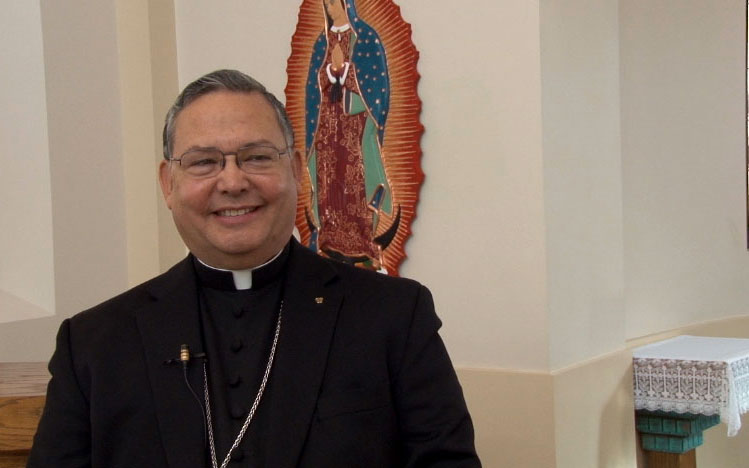 Auxiliary bishop of the diocese of Phoenix Eduardo Nevares will be making the trip to Ciudad Juárez to see Pope Francis on Feb. 17. (Photo by Chloe Nordquist/Cronkite News)

“I was just so happy,” Siller said. “Juárez has suffered a lot with the violence. I have friends and family that have passed. Francis is going to help heal the wounds of the city.”

StoryMap: Past papal visits to the U.S.

Siller is one of hundreds of Arizonan Catholics making the trip south of the border to see Francis, who begins his Feb. 12-17 historic pilgrimage in Mexico City. Francis’ last stop will be in Ciudad Juárez, just steps away from the Rio Grande. The visit to the border will be the closest a pope has been to Phoenix since John Paul II held a mass in Sun Devil Stadium in September 1987.

Auxiliary Bishop for the Catholic Roman Diocese of Phoenix Eduardo Nevares will lead the Arizona delegation, making the 444-mile trek from the Valley to Juárez. The bishop hopes to have a five-minute reunion with Francis in which he plans to send “the greetings of the people of Arizona to him and let him know of our love and prayer,” he said, adding that he hopes Francis’ message to the people of Mexico will resonate with those across the United States and beyond.

“The Holy Father will ask the people of the United States and the people of Mexico and the whole world to have consideration for the migrants,” Nevares said. “We know that these are people that leave their home country, their environment, their customs. The pope will be talking about the need to be welcoming to the migrant.”

At least three Catholic parishes from Phoenix and several more from throughout Arizona are headed for Mexico City or Ciudad Juárez.

Patricia Marquez, a parishioner of Our Mother of Sorrows church in Tucson, will also be driving down to the border to see Francis. She said she feels an extra connection with Francis because he is the first Latino pope.

“I like the fact that he’s Latino,” Marquez said. “In Mexico, they loved Pope John Paul II. There really was a special place for him in Mexico. I think the people of Mexico will embrace Francisco like they embraced John Paul II.”

St. Mary’s Basilica parishioner Elvira Espinoza has already seen Francis four times, including his visit to Philadelphia in September. Espinoza, a native of Mexico City, said the country knows how to welcome the pope. John Paul II’s visit to Mexico City is what motivated her to convert from Baptist to Catholic.

“I was living in Mexico City when John Paul II went there,” she said. “I can tell you that the way they received the pope — nobody in other countries has been able to replicate that. It was a really beautiful moment. I was not Catholic back then, but when I saw the people feeling that way, I felt touched.”

More than anything, Siller hopes the papal visit will help unify the community where he grew up. He said the city and its U.S. neighbor, El Paso, drifted apart at the height of drug violence in 2010.

“I’m from the 1980s, so everyone was going back and forth between El Paso and Juárez,” said Siller, who moved to Phoenix in 1988. “When the violence started, the cities split. There was a split in the border. I think he wants to reconcile the two cities and bring them back together. … I think the pope will bring us together.”