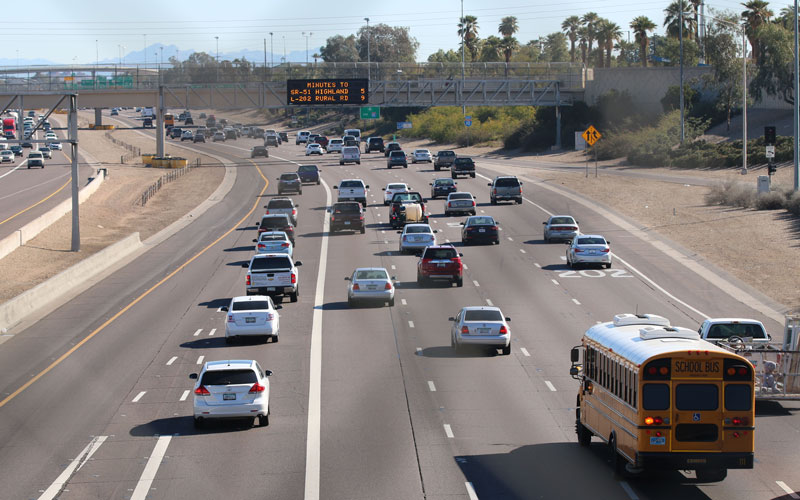 Cars drive down I-10 East on Feb.3. (Photo by Gabrielle Abbott/Cronkite News)

Rep. Karen Fann, R-Prescott, proposed a bill that would prohibit use of mobile phones by drivers with instruction permits and teen drivers who are within their first six months of having a license. This would not apply after a driver’s 18th birthday or in emergency situations.

The bill has been assigned to the traffic and infrastructure committee, and a hearing is expected within the next two weeks.

Rep. Randall Friese, D-Tucson, a co-sponsor of the bill, said House Bill 2241 is a logical step in working toward creating the safest conditions for drivers.

“Clearly a distracted driver is a driver who is at risk to cause injury to themselves or another,” he said. “When you’re talking about a driver who is just learning how to drive, and add distraction on top of that, that is a recipe for disaster.”

Phoenix Police Department Det. Joe Bianchi said the bill would be a good start, but enforcement of it would be difficult and unlikely.

The age-specificity of the bill targets what Friese called a “‘vulnerable population,” but Bianchi said this distinction presents an issue when catching someone committing the offense.

“I’m not going to know, looking at the driver next to me, are you 16 years old and you have your class G driver’s license in the first six months,” he said. “I’m not going to have any idea.”

Catching cellphone use while driving and tracking it in all situations depends completely on the people involved.

“We have to rely on witness statements, observations and then the drivers themselves,” Bianchi said.

If an incident occurs, the driver or other witnesses would need to say that the driver was using a phone.

“Most people do not say they are using their cellphones. “We don’t know unless you tell us,” Bianchi said.

The easiest way for police officers to enforce a law addressing cellphone use while driving would be to ban all types of use (texting, speaking on the phone, looking up directions, etc.), for everyone, Bianchi said.

“If you have a cellphone in your hand, you’re breaking the law,” he said. “That’s something that the police department can enforce easily.”

Mark Breyer, a personal injury and wrongful death attorney, said the bill is only the beginning of tackling distracted driving, and although it is not guaranteed to solve the issue, it should be enacted.

“At a minimum instead of saying the bill won’t do enough, so let’s do nothing – how about we say, a bill like this is a good start,” Breyer said.

Bianchi and Alberto Gutier, Director of the Arizona Governor’s Office of Highway Safety, said education is the best way to spur a reduction in the use of cellphones while driving.