A skybridge links San Diego and Tijuana and allows passengers from the U.S. to catch flights in Mexico. (Photo by David Santillan/Cronkite News) 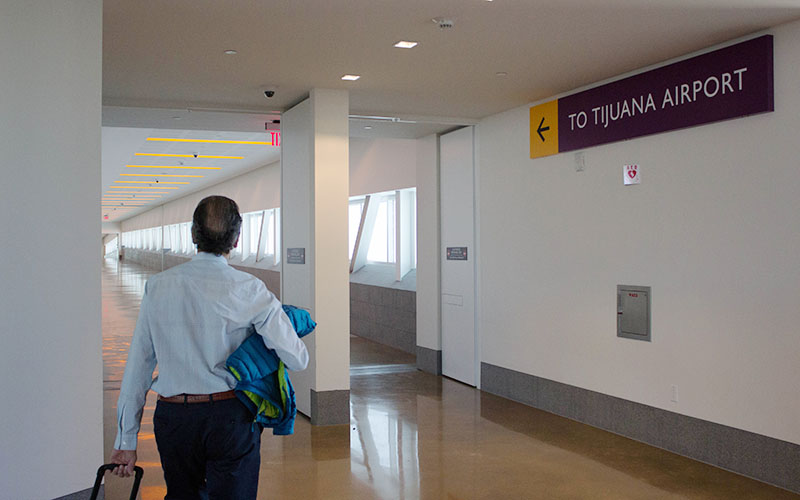 An airline passenger from San Diego uses a skybridge that straddles the border to reach his gate in the Tijuana airport. (Photo by David Santillan/Cronkite News) 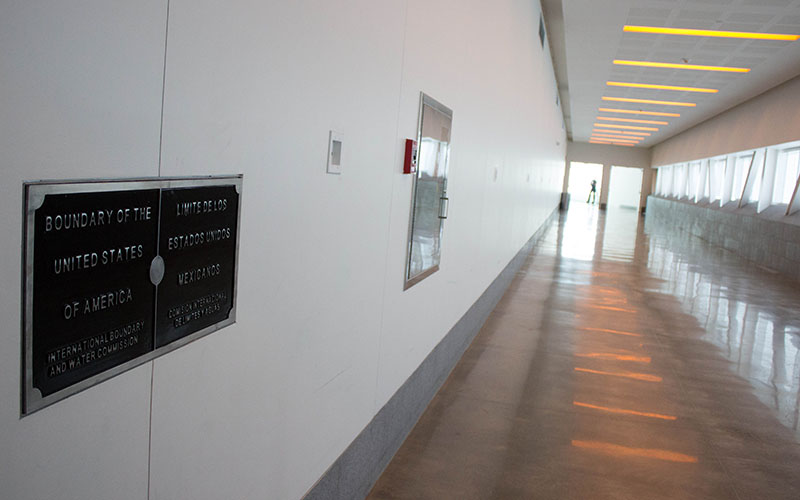 A sign inside the CBX Airport Terminal marks the spot where passengers cross the U.S. Mexico border to catch flights. (Photo by David Santillan/Cronkite News) 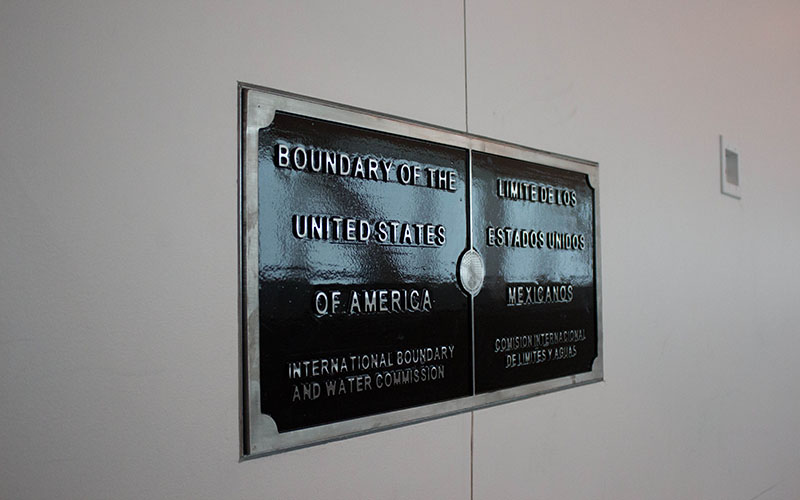 An international boundary sign marks the gateway from the U.S. to Mexico inside a cross airport border skybridge. (Photo by David Santillan/Cronkite News)

“They clear through immigration and customs and check-in right into their flight,” said Elizabeth Brown, Chief Commercial Officer for Cross Border Xpress, or CBX, a Tijuana-Otay Venture company. “And likewise they arrive in the baggage area, cross the bridge and they are in the United States within minutes.”

The facility includes a pedestrian skybridge in San Diego that connects to the airport in Tijuana, the first of it’s kind spanning an airport, Brown said.

The bridge is 390-feet long and it takes passengers about five minutes to walk across and catch a flight at the Tijuana airport. Ticketed passengers pay $12 to use the facility.

Jesus Ochoa Padilla, a frequent traveler, says it’s worth the fee to avoid waiting in long lines at the international border crossing.

“This service is great,” said Ochoa, as he waited outside the CBX terminal on the U.S. side “Sometimes I would have to wait two, even three hours to cross the border and now it is fast and my family can pick me up here.”

It took nearly eight years of negotiations, special permits on both sides of the border, and international agreements. The project required U.S. Customs and Border Protection collaboration with the contractors. The private company that owns CBX covers the cost of staffing CBP officers who inspect immigration documents of passengers using the cross border terminal. Those passengers also have to comply with U.S. Customs regulations.

“It is a partnership, the sponsor is providing all the facilities and the payment for the officers, and the CBP handles all the inspection and security requirements,” said Joseph Misenhelter, Assistant CBP Port Director.

The terminal could become a model for other cities trying to ease air travel and reduce a backlog at busy international border crossings. The Tijuana International airport has daily flights to 33 destinations in Mexico and three weekly flights to China.

“In terms of what we see, it is going to give greater access for southern Californians and greater access and people in the south part of the United States to be able to access tourism destinations; Baja California, Puerto Vallarta, Acapulco,” said Brown.