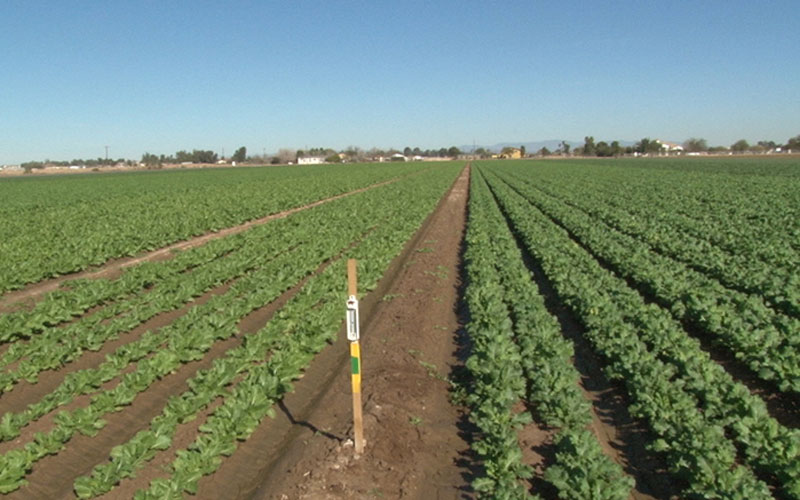 Mike Etchart, one of the owners of Everkrisp Vegetables Inc. in Tolleson, said consumers might see higher prices at grocery stores. (Photo by Chloe Nordquist/Cronkite News)

The storm, marked by four to five consecutive days of rain, increased cloud cover and left up to 3.5 inches of rain in some areas of Arizona, affecting farmers with winter crops.

Mike Etchart, one of the owners of Everkrisp Vegetables in Tolleson, said consumers might see higher prices at grocery stores.

The roughly 1,500-acre farm produces everything from organic kale to parsley to mixed lettuce.

Everkrisp does 100 percent of its production in the winter, and it’s a month behind because of the weather caused by El Nino and below-average temperatures and rain in November and December.

“This year, we’re behind,” he said. “We’ve got some nice weather now, but we’re anticipating some more wet weather in the spring, so it’s been challenging.”

Of the $3.7 billion in farm sales for Arizona in 2012, 56 percent came from crop sales, according to the University of Arizona.

“You already have, in some areas, about 3.5 inches of rain in only one week,” he said. “And if you know the average is 7 inches (per year), we already have half that in one week.”

The humidity also could bring other problems, like mildew and pathogens that harm plants, he said.

An increase in moisture isn’t all bad news, however.

The additional rain could help improve drought conditions in many areas. Growers like Etchart can reduce their reliance on irrigation.

“Basically, our timing of irrigation has a lot to do with the weather. We are anticipating one of the benefits from El Nino is using less irrigation water,” Etchart said.

El Nino, a worldwide climate phenomenon, can lead to storms and strong winds.

“El Nino is still a developing phenomena for us for the rest of winter,” Mostafa said. “It’s something we’re watching quite closely, and we’ll see whether that will impact especially the vegetable production here and in the Yuma area.”

Over the next few months, El Nino will likely have more of an effect in the south half of Arizona, including Maricopa and Pinal counties, he said.