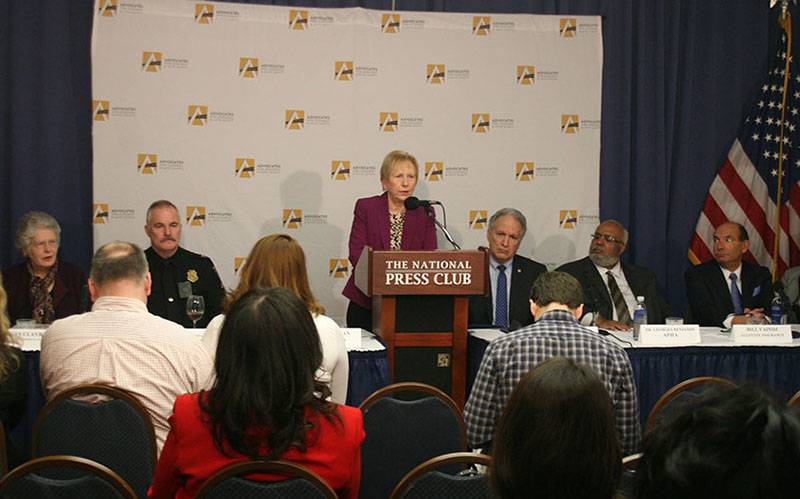 Police and transportation officials came out for the release of the 13th report ranking states on traffic safety laws. Arizona finished in the bottom category, at least the fourth straight year it has done so. (Photo by Madison Alder/Cronkite News) 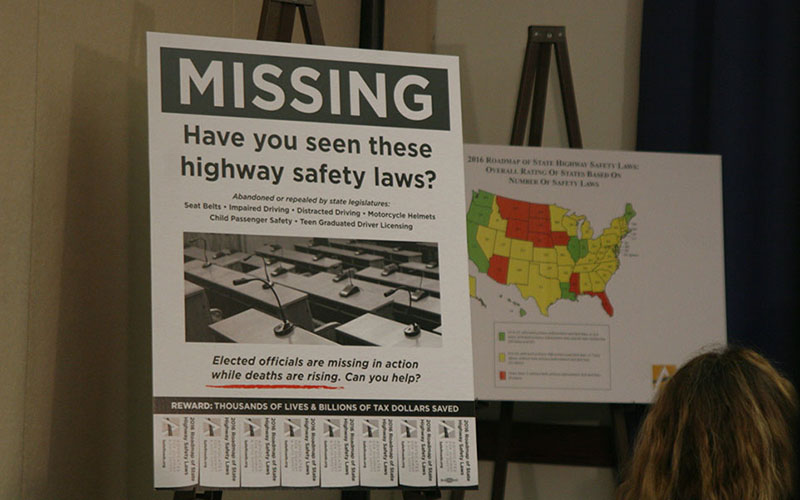 The report ranking states on their traffic safety policies asked the question, “Missing: Have you seen these highway safety laws?” The report identified 15 laws it said states should have to keep highways safe. (Photo by Madison Alder/Cronkite News)

WASHINGTON – Arizona’s driving policies make it one of the most dangerous states in the nation for drivers and their passengers, according to a report released Thursday.

The Advocates for Highway and Auto Safety report put Arizona in the “red” category – the worst – for its lack of strict seatbelt laws, motorcycle helmet requirements and texting-while-driving restrictions, among other policies.

Arizona was one of nine states in the red, meaning it had fewer than seven of the 15 laws the report considered best for highway safety. It’s at least the fourth year that Arizona has finished in the bottom rung of the rankings.

The 2016 Roadmap of State Highway Safety Laws ranked states on how many of 15 traffic safety laws they have. Arizona has just five:

No state had all 15 laws cited by the report’s authors, but 10 states and the District of Columbia were in the top, “green,” category and 31 were in middle, in the “yellow” category.

“I think we all ought to be looking at our traffic safety compared to other states, and right now Arizona isn’t doing well,” said Sen. Steve Farley, D-Tucson, who has been trying since 2007 to pass an Arizona texting-and-driving restriction – one of the laws considered for the report.

“These are basic laws,” said Jacqueline Gillan, the president of Advocates for Highway and Auto Safety, at the release of the 2016 report, whose theme was “Missing: Have you seen these highway safety laws?”

Arizona is missing a handful of laws that could significantly boost its standing in the report, said Cathy Chase, vice president of governmental affairs for Advocates for Highway and Auto Safety. Those include mandating helmet use for motorcyclists and requiring front and rear seatbelts for passengers.

“Arizona is lacking a primary enforcement seatbelt law for front and rear passengers, and this is a proven lifesaver,” Chase said. “When a car is in a crash, the passenger’s first line of protection is having a seatbelt law.”

She also noted that helmet laws for motorcyclists are “proven to be the most effective way to get riders to wear their helmets.” States with helmet laws have a higher helmet usage rate and fewer deaths, Chase said.

The report also said that Arizona is one of only four states with no restrictions on texting behind the wheel.

Farley’s latest attempt, SB 1349, would not prohibit texting behind the wheel but would make it an aggravating factor when considering the sentence if someone was convicted of another crime while texting and driving. The bill would apply to anyone using a wireless device to “type, send, read or enter a written or visual communication, including a text message, an instant message, an e-mail or a communication on social media.”

If the bill were to pass, it would not help Arizona move up in the rankings because it doesn’t restrict texting while driving.

In some previous sessions, Farley has introduced texting bills that never saw a vote. His latest bill was introduced in the Senate Thursday and sent to four committees for consideration – a move that Farley said makes the odds of passage even longer.

Farley said Arizona Senate President Andy Biggs, R-Gilbert, has been said his biggest opposition on past bills but he has “hope that he may come around at some point.”

“This is too important to let go,” he said.

“We are talking about families missing people at the dinner table,” she said. “We encourage Arizona to step it up.”