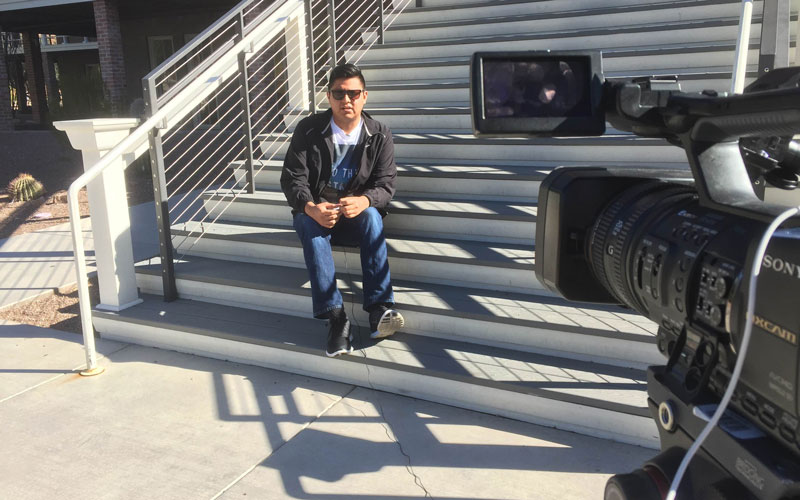 University of Arizona student Alray Mariano said he uses the Internet at home to practice the Navajo language. (Photo by Gilbert Cordova/Cronkite News)

Aresta La Russo, visiting scholar at the University of Arizona, searches the web for examples of the Navajo language. (Photo by Gilbert Cordova/Cronkite News)

Aresta La Russo, a visiting scholar at the University of Arizona, has taught Navajo since 2010. Over the years, La Russo said she has seen technology improve the way she teaches students and how their access to software and apps outside the classroom help them grasp the old language.

“I think with technology and the Navajo language, I think they go hand and hand pretty well,” La Russo said.

Alray Mariano, a junior at the University of Arizona, is taking La Russo’s class. He said he uses the Internet at home to improve his skills.

“The Diné College published a website dedicated to learning the Navajo language of how to structure sentences and how to use pictures to describe what is going on in a sentence,” Mariano said. “It’s very helpful in a way that when I go home, I can use the website (to) pronounce the words and learn how to structure the sentence.”

There are at least three mobile apps devoted to the language, including one called Navajo toddler that’s targeted at younger tech users.

The app features eight categories, including foods, animals, colors and clothes. It also plays five Navajo songs and has a “play” section.

The project aims to preserve the language, and the company has provided the software to Navajo schools, homes and chapter houses, according to the company’s website.

Over the past decade, the “language learning software developers” industry has expanded, according to market research company IBISWorld.

But with more companies introducing products and software, the market for language learning has seen slow growth compared to years past.

In the past five years, according to IBISWorld, the rate of industry expansion declined as the impact of the Great Recession reduced demand.

In its 2015 report, the analysts estimated that demand for learning software will continue to grow the industry for the next five years.