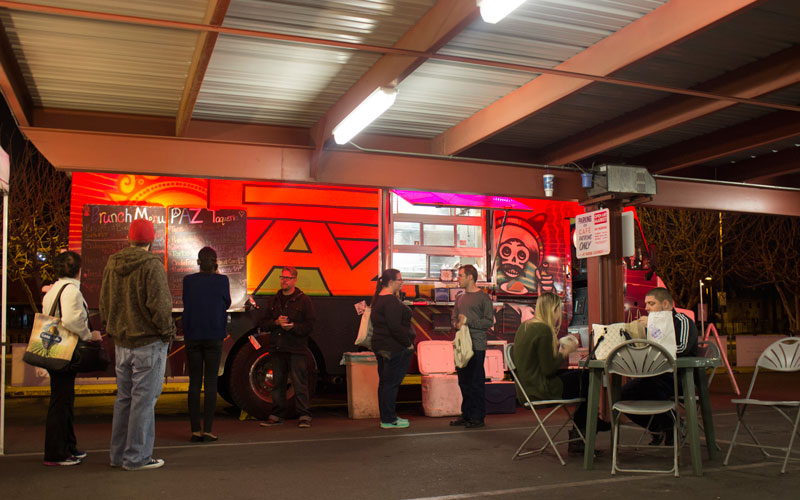 Customers stand outside Paz Cantina food truck at the weekly open-air market at Phoenix Public Market in downtown on Thursday, Jan. 21. Paz is known for its gourmet take on Mexican food. (Photo by Molly Bilker/Cronkite News) 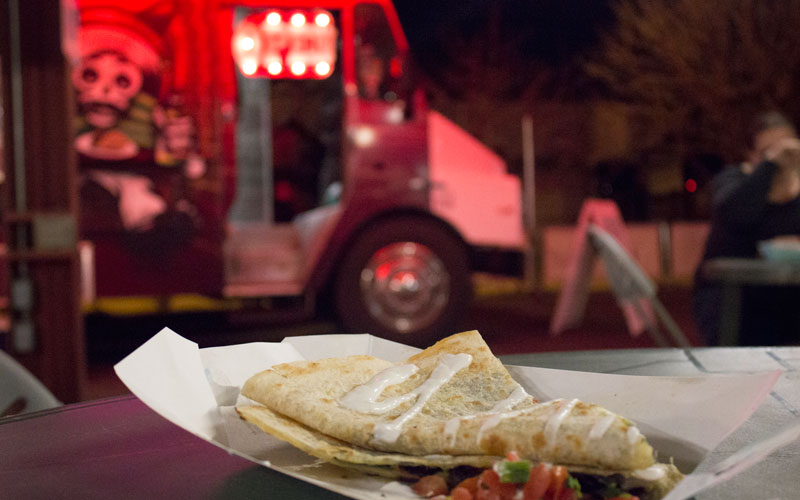 Paz Cantina chef Michael Reyes uses ingredients that might not be expected in “traditional” American Mexican food items, such as kale, in his quesadillas. 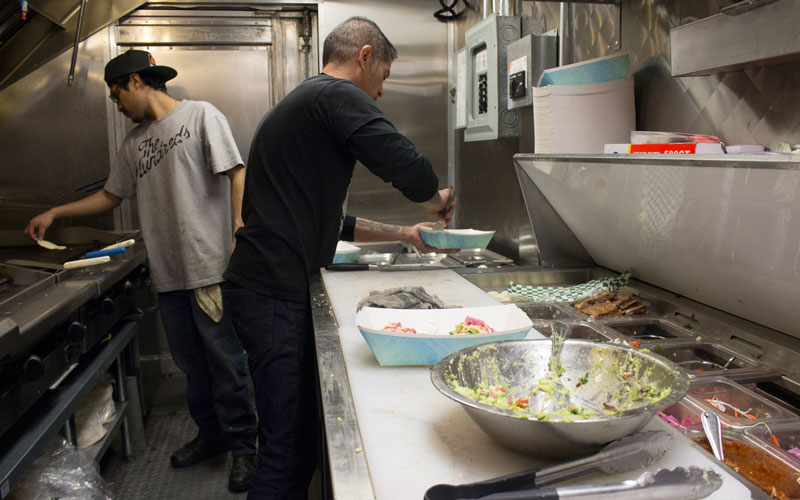 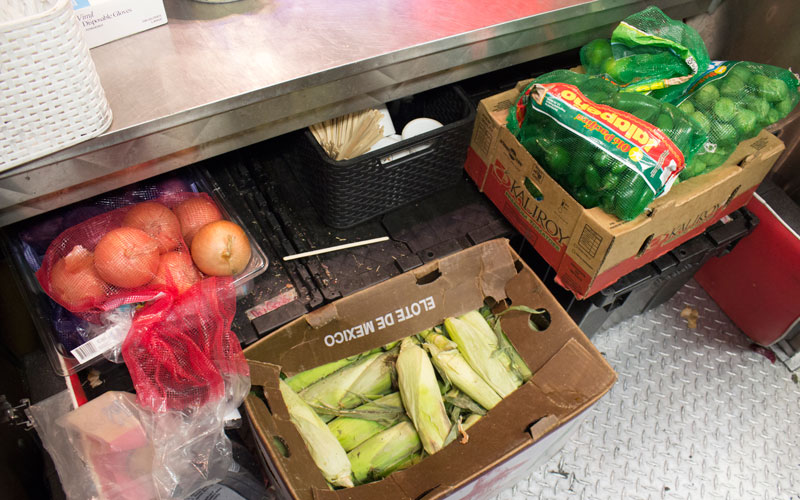 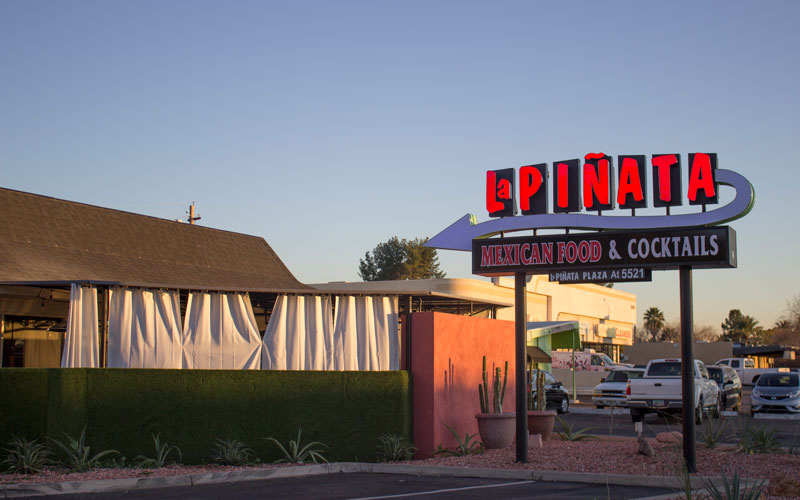 La Piñata Mexican restaurant is a popular spot that serves traditional Sonoran-style Mexican food. The restaurant recently moved from its previous, 45-year location and has seen an uptick in business since. (Photo by Molly Bilker/Cronkite News)

One traditional item at Mexican restaurant La Piñata is the mini chimichangas, served with guacamole. Chimichangas developed in the United States and are considered one example of “Americanized” Mexican food. (Photo by Molly Bilker/Cronkite News) 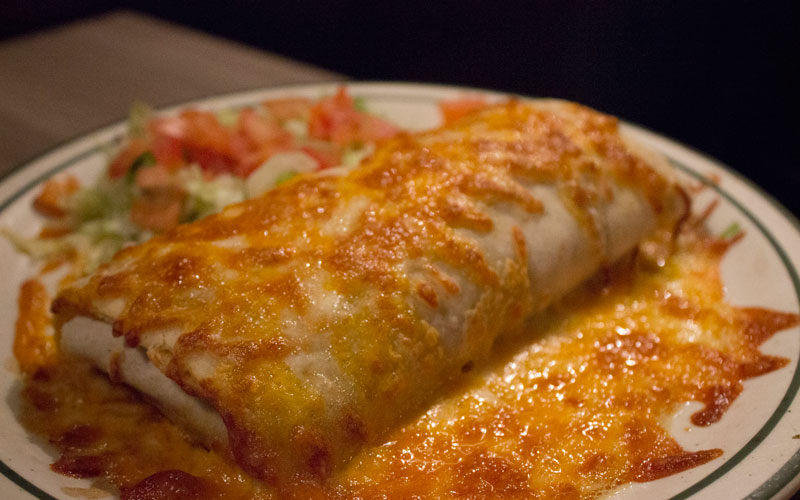 La Piñata Mexican restaurant offers what may be considered more “traditional” Mexican food such as the shredded beef burrito with melted cheese. The restaurant has been in business for 45 years. (Photo by Molly Bilker/Cronkite News) 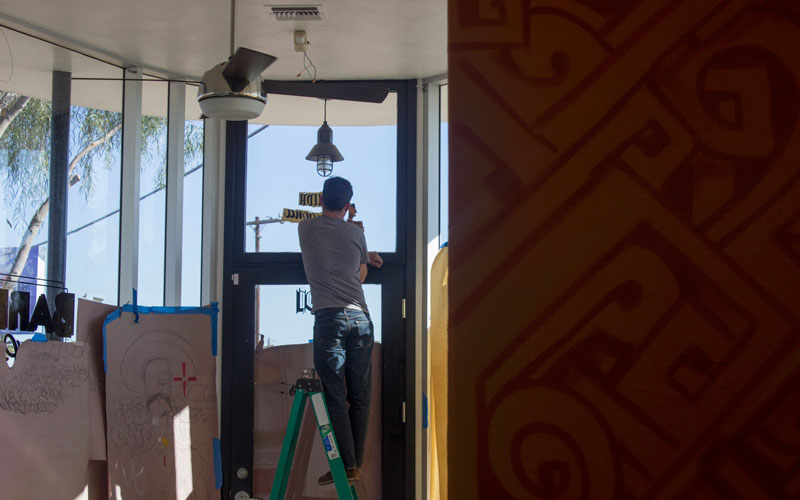 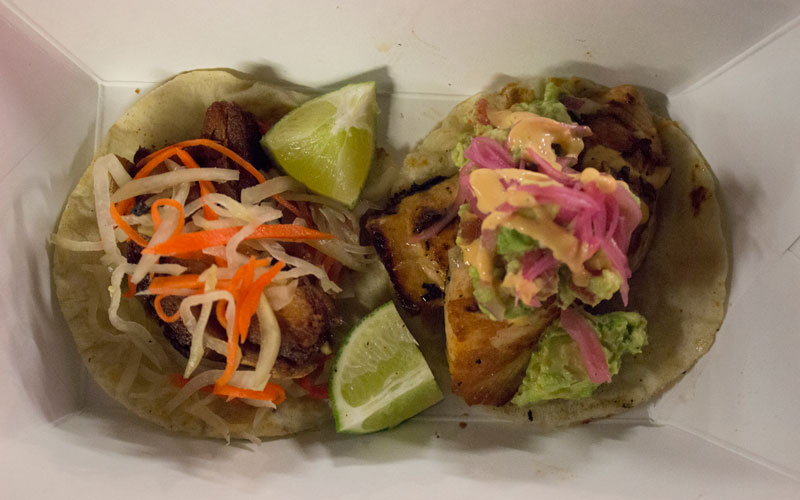 Paz Cantina chef Michael Reyes tries to limit the number of items in each recipe to keep his food simple. The pork belly taco (left) is the most popular item on the menu.
(Photo by Molly Bilker/Cronkite News)

Chefs such as Silvana Salcido Esparza at Barrio Café and Michael Reyes at Paz Cantina are redefining what Mexican food means by adding personal and regional twists to their guacamole, tacos and tortas. The trend toward more upscale dishes has ramifications that go beyond taste buds and is poised to impact how Arizonans view Mexicans in the state.

StoryMap: Tacos with a twist

It’s the result of a convergence of several elements: chefs who have culinary training, an appetite in the U.S. for regional variations in dishes from Mexico and a movement led by younger people who use locally grown foods.

“You’ve got younger, smarter, passionate people that, they know better now,” Reyes said. “They know that if you’re going to source, you have to do it locally first, respectfully, because it’s a better carbon footprint.”

Mexican food has long been considered “downscale,” said food historian Jeffrey Pilcher, author of “Planet Taco: A Global History of Mexican Food.” While more upscale Mexican food has been growing since the ‘80s in Texas and California, Arizona has been slower to develop, Pilcher said.

Currently, Yelp results show 2,418 Mexican restaurants in the Phoenix area, compared to 845 for Chinese restaurants. No comparisons for previous years were immediately available.

High-end Mexican food has the opportunity to combat prejudices that may exist against Mexican people, Pilcher said, by offering monetary and status benefits to those who are preparing and selling what might be considered “higher-class” Mexican food.

A greater focus on chef-driven Mexican food can change the identity of a state like Arizona, said Los Angeles Magazine food writer Bill Esparza. According to 2014 census data, Arizona has a Mexican population of 1.8 million — over a quarter of the state’s total population.

“Arizona has a reputation among the Mexican community as not the friendliest state,” Bill Esparza said. “So I would say that this is definitely going to be one of the ways where people who have been closed off to Mexican culture and are not Mexican might find an appreciation.”

Silvana Esparza, who opened Barrio Café in 2002, said that at the time she had to get many of her ingredients from Mexico. In the past six to seven years, though, her ingredients have become more available in Arizona, showing a shift toward more genuine Mexican ingredients used in cooking in the state.

Foods that have been labeled “Mexican” in the United States are often Americanized, such as chimichangas, fajitas and chips and salsa, Silvana Esparza said. For her, the movement toward gourmet shows a return to Mexican roots because it focuses on high-quality ingredients from fresh and genuine sources.

“It’s taking back Mexican food,” she said. “It’s like a reconquista.”

The question of what, exactly, makes Mexican food genuine or authentic is a source of debate in itself. Some, like Pilcher, say that because Mexican food varies so wildly from region to region, authenticity is a myth, a category that “doesn’t really exist.”

Bill Esparza disagrees — authenticity in Mexican food is real, he said, but is defined more by the chef’s understanding of and engagement with the purposes and preparations of food within the culture.

Whether or not authenticity is a red herring, Mexican food fans like Cynthia Chester and Rodney Cain have enjoyed the gourmet food chefs like Reyes are preparing. The two sampled tacos from the Paz Cantina food truck at the Phoenix Public Market open-air market Thursday night.

“To me, this is gourmet, because you’ve got the little pickled onions and all that, which we’re not used to,” Cain said. “Overall, it’s pretty good.”

Pickled onions are common in dishes from the state of Yucatán.

But gourmet Mexican items aren’t necessarily replacing demand for “traditional” foods, according to Roseann Schulz, co-owner of Mexican restaurant La Piñata. After the restaurant’s recent move closer to the heart of downtown Phoenix, La Piñata, which serves what Schulz calls “old-school” dishes including Sonoran-style tacos and tostadas, has seen an uptick in business.

“I questioned that before we moved — are people going to want what we’ve been serving for the 45 years?” Schulz asked. “It’s been so positive, so supportive — I feel like we’re doing something right.”

However it’s characterized, Mexican food that lands on a plate in the United States is in some form Mexican-American, developed from the countries it spans, Silvana Esparza said.

“It stops being Mexican when it crosses the border,” she said.