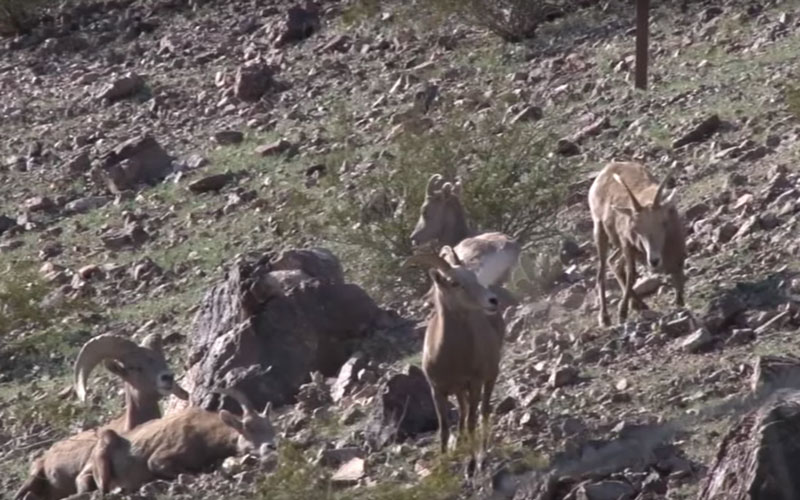 Winter noticed just two coughing sheep of the 29 that he saw throughout the day, but said any number could’ve been infected without showing visible coughing. (Photo by Ben Margiott/Cronkite News)

Area hunters first alerted officials to the disease when they witnessed sheep coughing in the first week of bighorn sheep hunting season, in early December.

“Most likely (the pneumonia) had to cross the Colorado River at some point and then the disease spread from that north side of Nevada down through Arizona and the Black Mountains,” said AZGFD wildlife manager Justin Winter.

“Coughing is the easiest symptom to spot from a distance but other symptoms include runny nose and mucus discharge,” Winter said.

The sheep are so spread out among the landscape and so difficult to spot from the ground that it’s difficult to estimate how many sheep in the mountains are sick.

Monday, Winter noticed just two coughing sheep of the 29 that he saw throughout the day, but said any number could’ve been infected without showing visible coughing.

Unfortunately, all wildlife officials can do is track how the disease spreads throughout the population. There isn’t much they can do to treat sickened sheep or prevent it from infecting more sheep.

“Even if we had a successful vaccine, how do we vaccinate animals in the wild?” said Anne Justice-Allen, wildlife health program manager. “It’s nearly impossible to provide a vaccination protocol.”

The lack of a vaccine and the inability to prevent the strain from spreading means bighorn sheep could experience a significant die-off over the next several months.

“We know historically that mortality events due to pneumonia can cause anywhere from a 90 to a 50 percent loss in sheep numbers,” Justice-Allen said.

Lab results confirmed that the strain of pneumonia was similar to a strain that Arizona sheep were exposed to in the past, meaning they could have a better resistance to the disease.

It’s much too early to determine how strong this strain is, but officials hope to have a better idea when they survey the population later this spring.