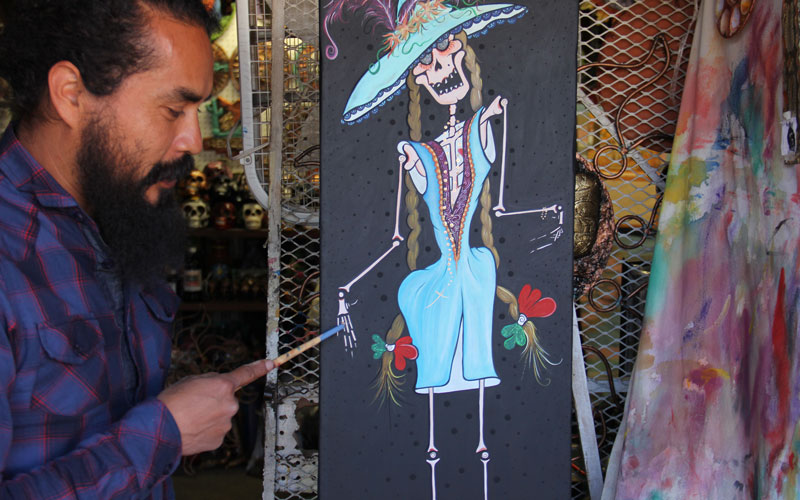 Israel Gutierrez explains one of his paintings on display in his shop in Nogales. (Photo by Chloe Nordquist/Cronkite News) 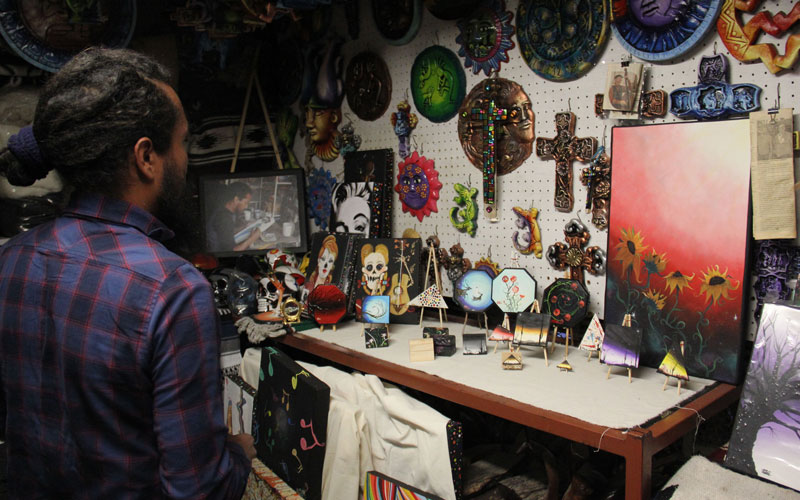 Gutierrez explains the inspiration behind his paintings — the Sonoran desert. (Photo by Chloe Nordquist/Cronkite News) 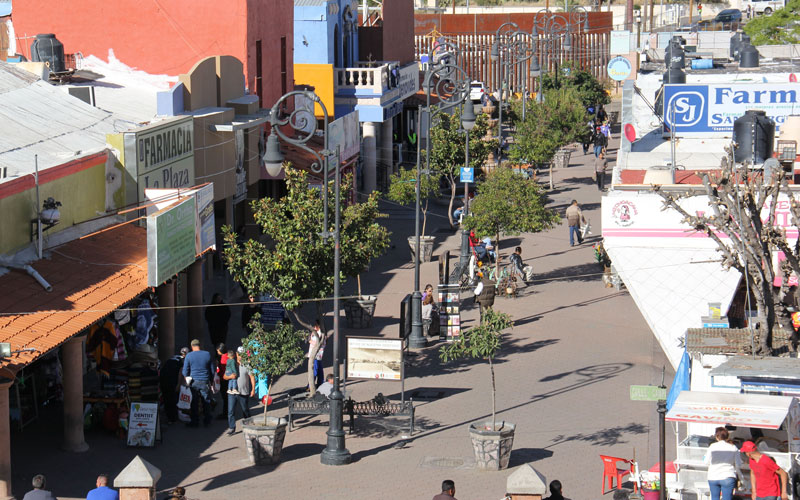 Cars waited along Mexican Federal Highway 15 to get in to the United States. (Photo by Chloe Nordquist/Cronkite News) 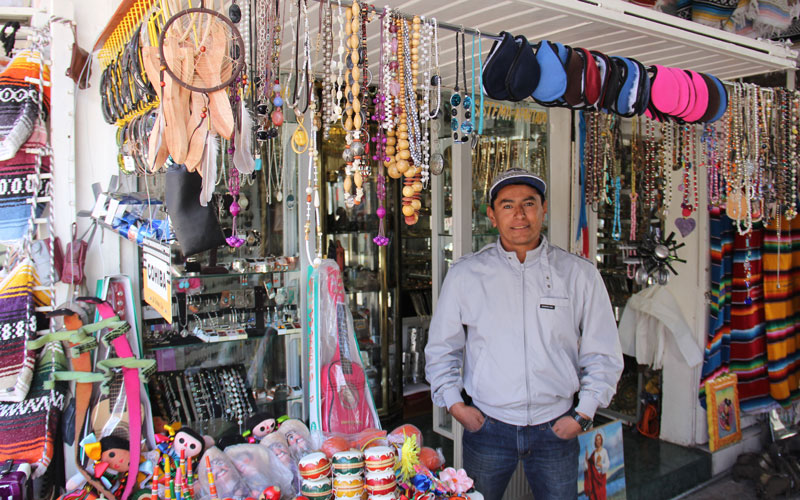 Roberto Claudio stands at the front of his shop, which faces a main walkway filled with shops and pharmacies in Nogales. (Photo by Chloe Nordquist/Cronkite News) 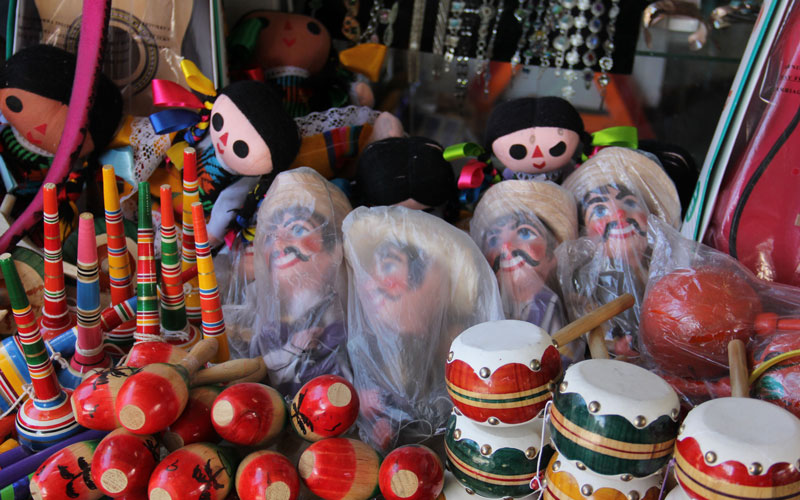 Claudio displays some of his items for sale on tables outside his shop.
(Photo by Chloe Nordquist/Cronkite News)

The state of Sonora has been working on a number of initiatives in partnership with Arizona to increase tourism throughout the region, Jesus Antonio Berumen, the Sonora State Secretary of Tourism said.

The projects include new flights connecting Phoenix to San Carlos and Phoenix to Puerto Peñasco, he said, adding that full details will be released in the weeks to come. A renovation of the main highway going through Nogales and the construction of the first cruise-ship home port in Puerto Peñasco, also known as Rocky Point, are also in the works.

“Every year the American government delivers a travel warning for many countries, not only Mexico,” Berumen said, downplaying the updated alert, which includes certain areas of Sonora.

Berumen said recommendations such as “drive in daylight” are common sense suggestions for anyone traveling in unfamiliar areas.

“I hope that the next spring break will show the confidence that people from Arizona and New Mexico have in Mexico,” he said, referring to areas that are tourist magnets for Sonora.

“A very important project for us between Arizona and Sonora is the connection,” Berumen said, noting that the number of U.S. passengers to Sonora increased 15 percent in the past three months. “The connection by flight and by highway.”

But in recent years the border city of Nogales has struggled in attracting tourists. Since 2008 the number of pedestrians crossing the border through Nogales declined drastically, from 6.5 million in 2008, to slightly over 1.4 million in 2015, according to the U.S. Department of Transportation.

Drug violence, including shootings in public places has been the big deterrent. The travel warning was renewed because of the overall spike in homicide numbers throughout Mexico and in Sonora, especially near the Nogales area, affecting many business owners there. In 2008, 49 U.S. resident homicides were reported throughout Mexico including within the state of Sonora, however none were in Nogales, according to the U.S. State Department. In 2014, 88 U.S. residents were victims of homicides throughout the country, including four in Nogales, Sonora.

The frustration of Nogales shop owners was evident during interviews last November. Roberto Claudio has owned a shop in Nogales, Sonora for 17 years and sells everything from jewelry and blankets to Cuban cigars and toy airplanes made of empty aluminum cans.

“There was better business before, a lot,” Claudio said. “Everything is closed. If you see the main street it is closed. Years ago, a lot of people were here, in the restaurants and everything. They stopped coming because they were afraid about the violence, but I think it’s going to be better.”

“We want to increase the number of visitors in the whole region,” he said. “Arizona and Sonora can offer a wide range of services.”

One of the initiatives designed to boost the tourism business includes creating a combined Chamber of Commerce with Nogales, Arizona and Nogales, Sonora. Additionally, the Arizona-Mexico Commission and the Arizona Office of Tourism are working together on a number of initiatives to promote tourism.

“Among one of the many issues we’re working on is the security of our border but also the communication of what the realities are,” said Luis Ramirez Thomas, President of Ramirez Advisors Inter-National and Chair of the Border Infrastructure and Economic Development Initiative for the Arizona-Mexico Commission. “I cross quite often and if you’re doing nothing wrong and just going to restaurants or whatever, it’s a pretty pleasant experience. Part of the effort is to get the word out that it’s not always (what’s) in the headlines. There are not mass shootings everyday.”

The goals include reducing wait times at border crossings and improving border infrastructure.

“We see the level of dialogue between the mayors and economic development entities to try to promote their community,” Ramirez said. “If there’s an investment in one side we’ll see it on the other. I think the biggest challenge is that they are communities that are divided by a federally designated border and all that that implies.”

Nearly 100,000 people in Sonora work in the tourism sector in hotels, restaurants and other establishments, Berumen said. The state has around 20,000 hotel rooms for visitors.

“What we want to do is improve the services and quality of the services to our customers and tourists,” Berumen said.

He said the best way to promote tourism going forward is by word of mouth. Shop owner Israel Gutierrez agreed.

“Nogales is not a violent place,” he said. “You can camp out here, no one tells you anything because it’s a touristy place.”

Gutierrez, an artist, has owned his shop on one of the main streets in Nogales, just a few blocks from the border crossing, for 12 years. The Sonoran desert inspires his paintings and other works. He, like Claudio, works seven days a week. He’s struggling but remains hopeful that new efforts to attract visitors will help boost tourism.

“They’re building bridges and making everything all nice and bringing little tours and cops that speak English,” Gutierrez said.