Amanda Marvel, a St. Mary’s High School senior, said she came to the March for Life because it is important for young people to show their support for the pro-life movement. (Photo by Danika Worthington/Cronkite News) 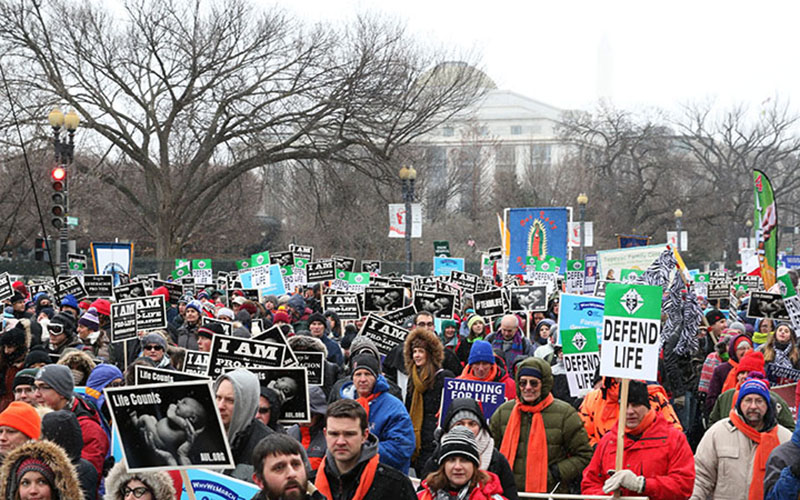 Thousands showed up for the 43rd March for Life, held on the anniversary of Roe v. Wade, the 1972 Supreme Court decision that recognized a woman’s right to an abortion. (Photo by Danika Worthington/Cronkite News) 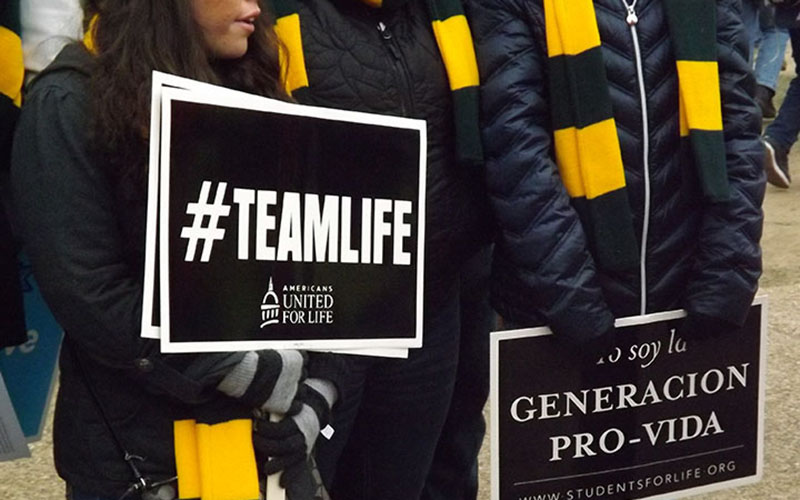 Organizers of this year’s March for Life urged aggressive use of social media to spread their message, telling marchers to post photos of the rally and use hashtags like #teamlife. (Photo by Madison Alder/Cronkite News) 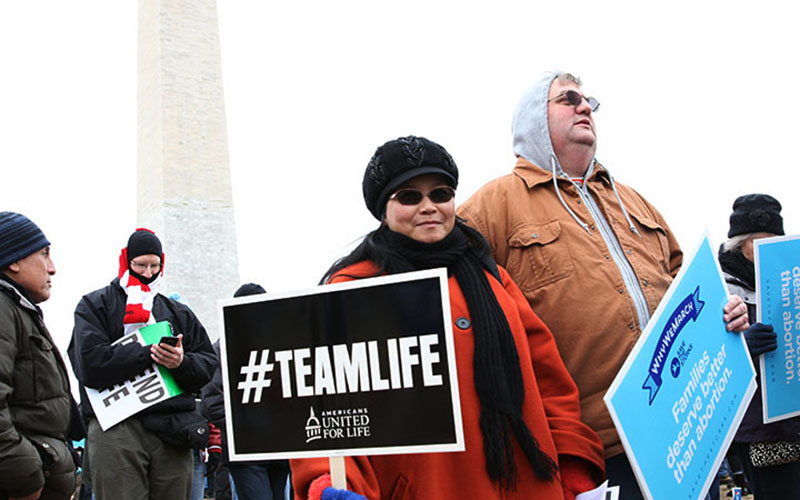 Alex and Gemma Covelesky, former Sierra Vista residents, at the march near the Washington Monument. Alex said his childhood as a foster kid sparked his pro-life sentiments. (Photo by Danika Worthington/Cronkite News)

Wesley Kodrowski, left, marches with some of the 23 students from St. Mary’s High School in Phoenix. The school has sent students to the march for more than a decade. (Photo by Danika Worthington/Cronkite News) 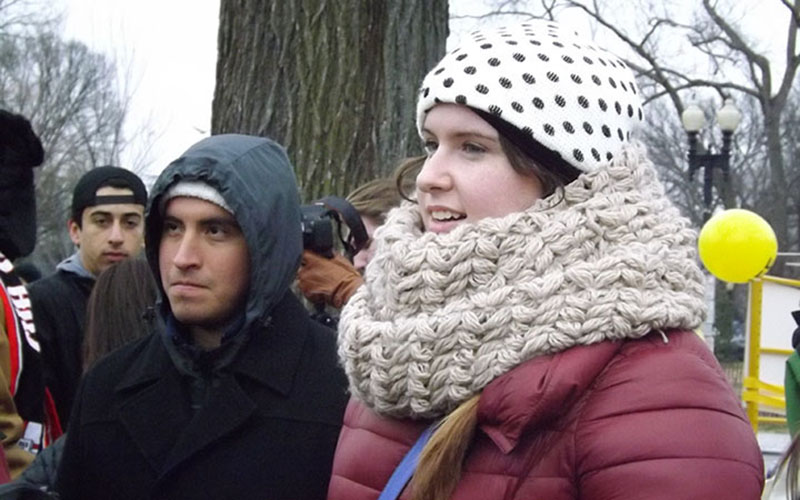 Mary Ellen Hannan, a former Arizona resident now studying nursing at Catholic University, was able to attend the march after snow forced classes to be canceled. It was her fourth march. (Photo by Madison Alder/Cronkite News) 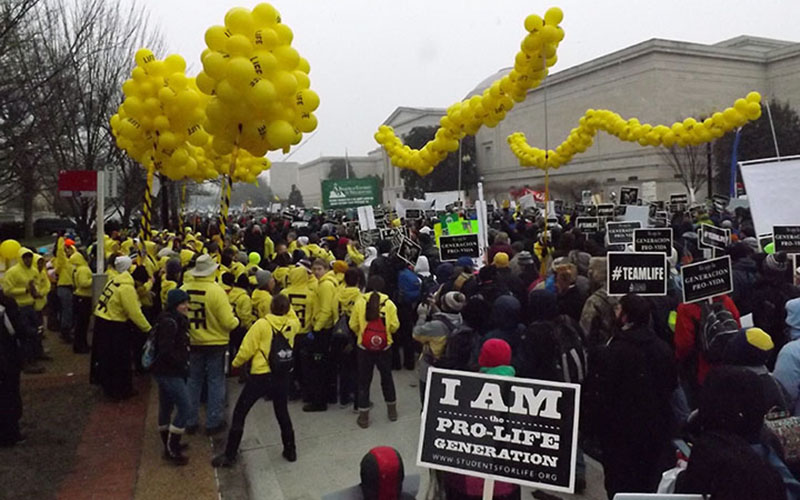 Organizers handed out signs and balloons near the stage before the chanting, singing crowd marched from the Washington Monument down Constitution Avenue to the Supreme Court. (Photo by Madison Alder/Cronkite News) 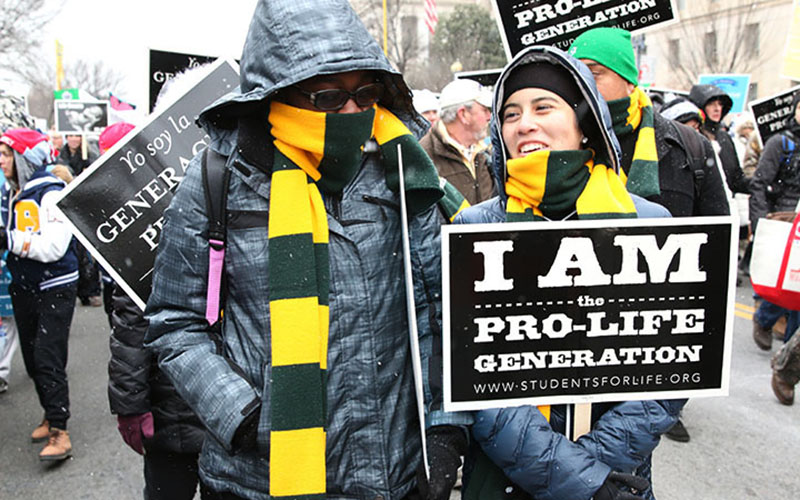 For some St. Mary’s High School students, it was their first time at the March for Life as well as their first snow, as marchers saw the first flakes of a possibly historic blizzard. (Photo by Danika Worthington/Cronkite News)

WASHINGTON – Arizonans joined thousands at the annual March for Life here Friday, delivering an upbeat pro-life message on a bitterly cold and snowy Friday in the nation’s capital.

Despite temperatures in the 20s and forecasts predicting a potentially historic blizzard, crowds gathered to hear speeches from politicians and religious leaders from a stage near the Washington Monument.

They started down Constitution Avenue just as snow began falling at 1 p.m. to head to the Supreme Court, where the March for Life has ended each of the last 43 years to mark the court’s Roe v. Wade decision recognizing a woman’s right to an abortion.

This year’s rally comes as Congress is trying to strip funding for Planned Parenthood and legislators in many states continue to try to chip away at abortion rights. The event also featured a decidedly younger face, with the march at times looking like a high school pep rally as much as it did a Washington protest on one of the most heated issues in politics.

“If we can’t stand up for life, how can we take care of anything else?” asked Kellie Taylor, director of student activities at St. Mary’s High School in Phoenix, which had 23 students at Friday’s march.

Taylor said the school has sent students to D.C. for more than a decade, and canceled classes Friday so students could also march in Phoenix and San Francisco. For senior Amanda Marvel, it was her second trip to the March for Life.

“It’s really important for youth to stand up,” Marvel said, adding that it is all too easy for young people to promise to do so “one day.”

While she was overwhelmed by the crowds last year, she said she was encouraged by the number of young faces, which she said helped make her more confident in her pro-life beliefs.

Youth groups were heavily represented, handing out signs and chanting along with a drum line. A particularly loud group held balloons, played drums and led chants normally found at a high school pep rally as they waited to march.

The age of the marchers was not lost on organizers, who pushed the use of hashtags and sharing photos on social media.

Susan French, a former board member of Arizona Right to Life, said she was “so thrilled with all the young people.”

French said she was pro-choice until she miscarried during the fifth month of her third pregnancy. She remembers thinking, “This is not a blob of tissue, this is a real baby,” and changing her position then on the issue.

At the time, she said, doctors tried to make women feel better about miscarriages by telling them that it wasn’t really a baby yet, but better technology like ultrasounds has changed that.

“They have more information with ultrasound and they’re able to see that it really is a baby. Back in my day we didn’t necessarily know,” French said.

She was not the only one at the rally with a personal story behind her conviction. Mary Ellen Hannan, a former Arizona resident now studying nursing at Catholic University, said doctors told her mother she could choose an abortion after noting that there was a high chance Mary Ellen could be born with Down syndrome.

Hannan said that story “triggered the pro-life commitment” in her.

“I’m going into the medical field and I think science supports the human rights aspect, but so does the faith,” said Hannan, who was at her fourth March for Life.

For many, including many of the St. Mary’s students, Friday’s march was a first – and in some cases, the first time they had seen snow.

“‘Go to D.C.,’ they said. ‘It won’t be that cold,’ they said,” St. Mary’s senior Thomas Whitman joked as the snow was coming down.

Cold aside, the march was upbeat. A trumpeter led some of the marchers in patriotic songs, while an occasional street preacher who walked by with a megaphone and a towering sign went largely unnoticed.