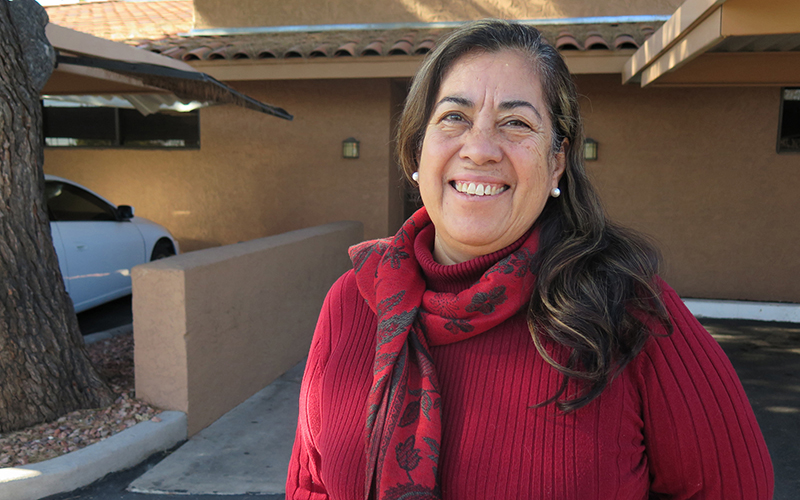 Rosa Maria Soto, 62, moved from Hermosillo, Mexico to the United States in 1999. She could qualify for the Deferred Action for Parents of Americans program. (Photo by Miguel Otárola/Cronkite News)

In 2013, Gallardo came out of the shadows and applied for Deferred Action for Childhood Arrivals (DACA), qualifying for a two-year work permit that allowed her to live legally in the United States. President Barack Obama issued an executive order in 2012 that created DACA for undocumented immigrants brought to the U.S. as children.

Tuesday’s announcement that the Supreme Court will hear a challenge of the expansion of the DACA program and Obama’s Deferred Action for Parents of Americans (DAPA) brought the executive orders back into the spotlight.

The two programs in question could impact 53 percent of unauthorized immigrants in Arizona, or about 160,000 people, according to a 2014 report by Pew Research Center. Together, more than 5 million immigrants in the United States would be affected under both immigration programs.

DACA has changed Gallardo’s life. She can now travel freely. “I showed them the work permit,” she said, referring to the authorities working the enforcement checkpoints. “That was very powerful for me. I wish that many families could do that.”

Gallardo, now 25, studies at Phoenix College and is the operations manager for Living United for Change in Arizona, or LUCHA. Last year the group helped more than 300 people apply for DACA.

She and millions of unauthorized immigrants across the country may soon get their wish if the Court rules against the lawsuit that challenges the deferred deportation programs.

“I realized that we’ve been waiting for more than a year already on this, going back and forth with the courts and the ruling,” Gallardo said. “But I feel pretty confident that in June there will actually be good news.”

It is also a bittersweet moment for many pro-immigration rights groups in Arizona and across the country, highlighting the delay parents applying for DAPA have endured since President Obama issued the executive order in November 2014.

The lawsuit United States v. Texas was brought the month after Obama announced DAPA and is supported by 26 states, including Arizona. The DAPA program would authorize temporary legal status to undocumented immigrants who are parents of U.S. citizen children if they have lived continuously in the country since 2010. A Texas federal judge filed an injunction in February of last year that blocked implementation.

Rosa Maria Soto, 62, moved to the United States from Hermosillo, Mexico in 1999. She overstayed her visa and could benefit from DAPA since her daughter is a legal permanent resident.

“We were waiting for DAPA to go to the Supreme Court because the justices there are more reasonable,” Soto said. “We have faith that they will have a more just and compassionate decision for the immigrant community.”

Many in Arizona are closely following the Supreme Court’s decision. Todd Landfried, the executive director for Arizona Employers for Immigration Reform, said the approval of DAPA would make a huge difference in a state facing a shortage of workers in several sectors.

“If there is another mechanism that allows people to be in the country legally and makes them available for the workforce for jobs that there is clearly a designated need, that’s a good thing,” Landfried said. “They pay taxes. They buy things. They go to restaurants. They go to sporting events. That’s all money into the economy.”

Texas General Attorney Ken Paxton released a statement saying the Supreme Court announcement shows the importance of separation of powers, and that Obama’s executive orders attempt to circumvent the law.

“There are limits to the President’s authority, and those limits enacted by Congress were exceeded when the President unilaterally sought to grant ‘lawful presence’ to more than 4 million unauthorized aliens who are in this country unlawfully,” Paxton’s statement reads.

The expansion of DACA challenged in the lawsuit would spread its benefits to all qualified applicants regardless of age, as long as they moved to the U.S. before they were 16 years old.

“A lot of people are under the impression that DACA 2012 is the one that is in court,” Gallardo said. “Individuals who still meet the criteria that was established in 2012 can continue to, and should continue to, apply.”

DACA and DAPA supporters say even if the programs are approved by the Court, they’re still only temporary relief for a country that needs broader changes in its immigration laws.

“The objective should be to fix the problem, not just deal with the symptom,” Landfried said. “And to a large extent, a lot of the discussions that are going on now, we’re just dealing with the symptoms and not the fundamental problem that our immigration laws need to be comprehensively reformed.”

President Obama has less than a year left in office. Regardless of the Court’s decision, DACA and DAPA could be in jeopardy if a Republican president is elected come November and decides to end deferred action.

“I don’t think there’s any question about that, that the people who have DACA cards now are going to be at risk,” Landfried said. “I think that’s an issue that really needs to be stressed, certainly in the Latino communities, that your friends and potentially family and relatives are at risk of being en masse deported.”

“I’m gathering what I think I’ll need in advance, though I don’t know exactly what the application will ask for,” Soto said. “That’s what I recommend to everyone. Don’t wait until the last minute.”