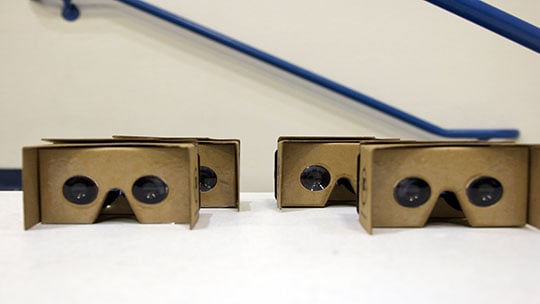 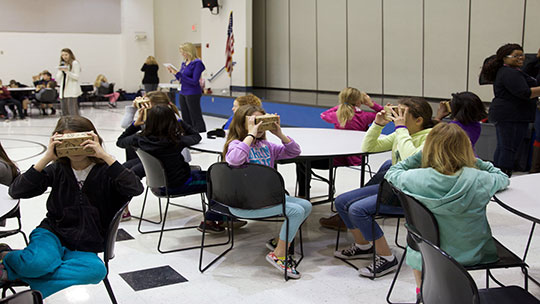 Horizon Community Learning Center fifth and sixth grade students follow along as the teacher gives information about what they are seeing in the viewer. (Photo by Gabrielle Abbott/Cronkite News) 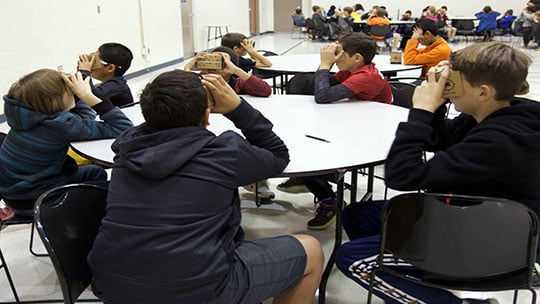 Manegold was given the opportunity to use virtual reality, a technology that combines a small rectangular viewer with a smartphone to present remarkably realistic scenes that users can explore.

These viewers, known as Google Cardboard, were brought to HCLC through the Google Expeditions Pioneer Program, a platform that enables teachers and students to travel the world by holding the box to their eyes.

With the right technology, anyone can enter the world of virtual reality.

Sarah Vallejos, who helps teachers at the school plan programs, heard about Expeditions at a conference and said she knew the school would be a perfect fit. She applied, and the school was chosen based on factors such as timing, availability and location.

HCLC Elementary School Principal Laura Wanstreet embraced the program, and said after previously having positive experiences with other Google services, she wanted to continue experimentation when offered the opportunity.

“We’re technology-forward and really trying to advance technology, and trying to get the newest and the best in the hands of our students as learning tools,” Wanstreet said.

The students, grouped by grade level, sat at tables in the multipurpose room and were each given a Google Cardboard. As they held the device up to their eyes, the teacher walked them through the lesson with a tablet.

The teacher clicked on certain places in the given location to direct the student’s eyes to that place. Google also provided talking points within the program to be read to the students.

Students remained seated but craned their necks upward and looked from left to right as they moved through the virtual reality. They gasped as they saw ancient buildings, rivers, massive structures and exotic nature.

The locations students visited, such as the Amazon, ancient Rome, Verona, Italy, and Brazil, were relevant to what they are learning, but teachers say they did not have much time to prepare for the experience.

Brad Skaggs, a fifth and sixth grade teacher, said he would have used more preparation time to have the students become comfortable with the technology, so they could focus more on the lessons being taught.

“One of the things that was kind of surprising was the vertigo that some of them had from looking at the screen and being immersed in that world and not being used to it,” Skaggs said.

Jane Cowley, also a fifth and sixth grade teacher, said she noticed her students taking breaks because of the very realistic nature of the exploration.

“It almost had the sense of if you were actually there walking around,” Cowley said.

But overall students had a positive reaction to the Google program Vallejos said, and noted she was relieved that the students weren’t bored by something that is commonplace in their everyday lives.

Ian Ambruster, a fifth-grader who visited ancient Rome in the program, said he liked how he felt like he was in the location.

“I really liked that I was sitting down at a table and it felt like I was standing on top of something,” Ambruster said. “I was like reaching around and I felt the table and there was really nothing there and that was really cool.”

“One of the biggest things with freshman is that they have trouble visualizing the world and really putting the images to what they’re reading about,” Garrett said.

Manegold said the technology gave her a better picture of what she was learning.

Based on the students’ enthusiastic reactions to the technology, Vallejos, Skaggs and Cowley all said they would like to implement this program into their regular classroom schedules in the future.

Vallejos said she is interested in obtaining classroom sets for the school.