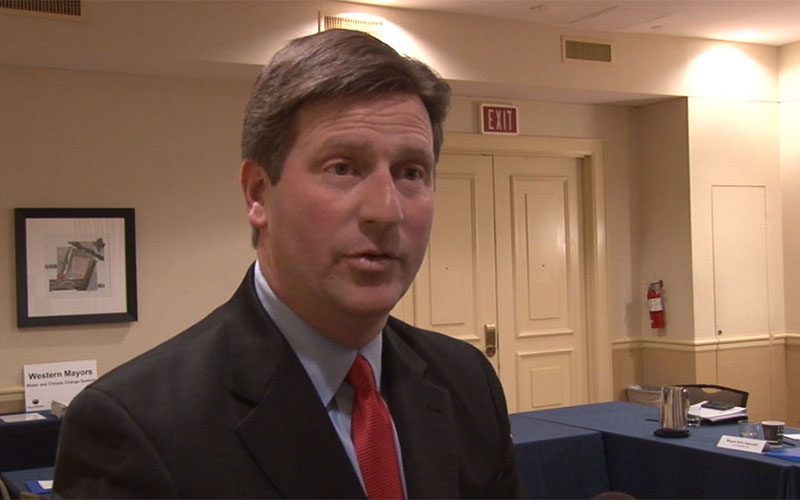 Phoenix Mayor Greg Stanton said he is optimistic for water-conservation that can be accomplished after a meeting in Washington with fellow Western mayors. (Photo by Katie Bieri/Cronkite News)

The level of Lake Mead fell so low it almost triggered a Colorado River water emergency last summer, when this picture was taken. River levels have since rebounded, but are still low. (Photo courtesy U.S. Geological Survey) 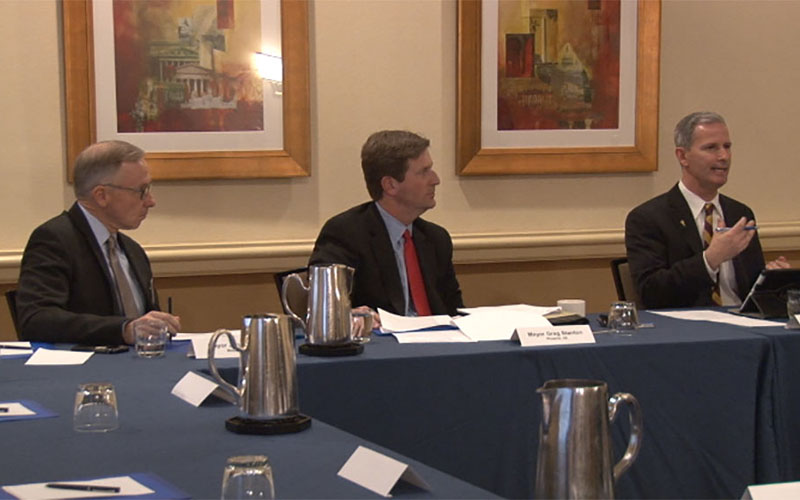 WASHINGTON – Phoenix Mayor Greg Stanton had a message for the group of Western mayors gathered in the nation’s capital Wednesday to talk about water resources: It’s time to work together.

“There’s this almost adversarial relationship between Arizona and California in which we ask, ‘Are they going to steal our water?’ and they ask are we going to steal their water,” Stanton said. “The more we can work together, maybe we can break down those concerns.”

The meeting, called by Stanton as part of the annual U.S. Conference of Mayors convention here, drew mayors from Mesa, Los Angeles, San Francisco and Aurora, Colorado. It came against a backdrop of California’s historic drought, and on the same day that NASA and the National Oceanic and Atmospheric Administration reported that 2015 was the hottest year on record.

The mayors took turns in the roundtable discussion touting the successes of their cities, most of which were a version of “Reduce, Reuse, Recycle,” and sharing frustration with failed water-conservation efforts.

Creative ideas, like San Francisco’s attempt to monitor personal water use through smart-meter technology and Aurora’s tightened policy on the use of groundwater by residents, earned emphatic applause and head nods from the room.

The mayors disagreed on little, congratulating each other for their successes when they weren’t touting their own. That ability to put aside politics and work together was one reason Stanton said he called the Water Solutions Summit.

“Mayors work really well together,” Stanton said after the roundtable discussion. “We tend to get along, and we’re nonpartisan.”

That dialogue is often ignored in meetings between larger bodies, he said.

“Western cities have unique challenges that are different from the rest of the country,” Stanton said. “We’re tired of going to meetings where cities have too much water and we’re here in drought conditions.”

While they agreed that California’s drought has been an inspiration to change the way their cities look at water solutions, Mesa Mayor John Giles said the threat of drought has always been in the forefront for Arizonans.

Giles credited past lawmakers for Arizona’s ability to avoid such drastic shortages.

“The truth was that in Arizona we’ve understood that we are in a desert climate since forever, so for the last few decades, politicians … have been laying the groundwork to not be exposed to the same kind of problems as California,” Giles said.

The group later considered a list of principles from Stanton and Dave White, the director of Arizona State University’s Decision Center for the Desert City, that the two said would help each city implement water-conservation solutions. The list centered on educating constituents on individual water use through data and technology, while fostering a “conservation culture” among future generations.

The mayors were urged to take the principles back to their cities and report back to the group in a year.

Stanton said the most difficult and the most important hurdle to overcome will be trust among the state’s cities, especially the smaller ones.

“Trust is always the issue,” Stanton said. “We have to stop thinking of water as a zero-sum game, and that if Phoenix does better it’s somehow at the expense of some other area of Arizona, particularly the rural ones.”