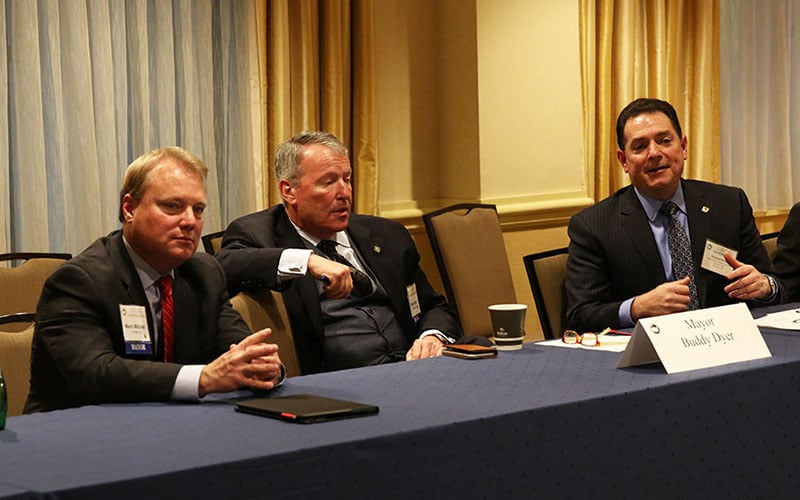 Tempe Mayor Mark Mitchell, Orlando Mayor Buddy Dyer and University of Central Florida Police Chief Richard Beary, from left, talked about challenges that campuses can pose for law enforcement in the cities that house them. (Pnoto by Madison Alder/Cronkite News)

WASHINGTON – When mayors of college towns gathered here Wednesday to discuss law enforcement challenges that come with having a campus in their cities, the University of Central Florida’s police chief steered them toward several possible solutions.

And UCF Chief Richard Beary steered them away from another – arming students and faculty members.

“Putting guns on a campus with alcohol, drugs and mental health issues, I just don’t see it having a good outcome,” Beary told a task force for mayors of college towns, on the first day of the U.S. Conference of Mayors winter meeting here.

In a statement Wednesday, the board said that it voted unanimously to oppose HB 2072 and HB 2338. But the statement also said that, given the “recurring events involving deranged or terrorist shooters on campuses and elsewhere,” it would work with university presidents, chiefs of police and others to find alternative solutions.

That was fine with Tempe Mayor Mark Mitchell, the co-chairman of the Mayors and Metro Universities Task Force that held Wednesday’s session with Beary.

“I agree with the rules the Board of Regents already have in place,” he said after the task force meeting he convened with Orlando Mayor Buddy Dyer and South Bend, Indiana, Mayor Pete Buttigieg.

But Arizona Rep. Sonny Borrelli, R-Lake Havasu City, and a sponsor of the two bills the regents oppose, said there should still be room for conversation.

“Well, sure, irresponsible gun use will have a bad outcome,” said Borrelli, the primary sponsor of HB 2072. “But right now, no one knows who’s carrying on campus and who’s not.”

Borrelli said his bill isn’t just about guns but includes other means of self-defense like Tasers that are also prohibited on Arizona college campuses.

His bill would require students and faculty who carry on campus to register with campus officials, and would also require that colleges “adopt and enforce guidelines for the use of a firearm in an active-shooter incident.” Borrelli says the process to get a gun permit and then register with the university would not be easy, protecting students from those who don’t know how to use a gun safely.

“What I’m proposing is that at an institution of higher learning, gun usage and safety should also be taught,” Borrelli said.

Borrelli said his bill would not apply to carrying weapons to college sporting events, on the assumption that there is “adequate security” at such events.

Security at sporting events was another one of the highly discussed topics at the mayors’ panel Wednesday. Many of the mayors expressed concerns about security at large sporting events and the use of metal detectors, especially in light of the terrorist attacks in Paris.

While Arizona bans guns on all public university campuses in the state, at least nine other states allow guns on campus, including Colorado and Utah, according to ArmedCampuses.org, a gun-control group.

Borrelli said it’s time for Arizona to join that list.

“I don’t want the conversation to end,” Borrelli said of the regents’ vote. “I understand that they have their concerns and I’m willing to talk about it.”

– At a meeting with other mayors of college towns, Tempe Mayor Mark Mitchell talks about the importance of maintaining good communication between city and university officials.