Drew Rodriguez sits at a bus stop outside the extended-stay hotel where he lives in north Phoenix on Jan. 14, 2016. Since the bus driver strike began on Jan. 8, Rodriguez has had difficulty running errands and getting where he needs to go. (Photo by Molly Bilker/Cronkite News) 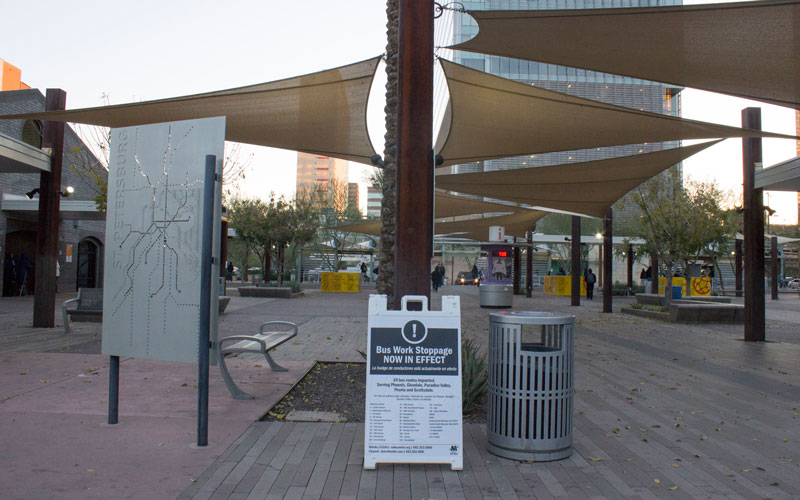 A sign at Central Station in downtown Phoenix displays the bus routes that have been affected by the Phoenix bus driver strike on Thursday, Jan. 14, 2016. The strike began on Jan. 8.
(Photo by Molly Bilker/Cronkite News)

The bus strike ended Saturday with transit company Transdev recognizing drivers’ requests for higher-quality restroom access, among other pleas, according to the Arizona Republic.

Low-income riders were particularly impacted, with limited alternatives for transportation during the strike, according to Christy McClendon, president and CEO of nonprofit organization New Pathways for Youth.

“Our lesson learned would be, ‘how do we make sure that we’re taking care of our community from a holistic perspective?'” McClendon said. “We have to think about the people that are impacted on the other end. Kids that don’t have a voice in the system at all, families in crisis, in poverty, who aren’t communicated with proactively, to be able to prepare and plan for their life that goes on hold until the strike is over.”

The city’s main consideration in the aftermath is clarifying the requirements in contracts with companies like Transdev, which operates local routes and was the source of driver complaints that culminated in the strike, according to Brenda Yáñez, public information specialist for the city’s Public Transit Department.

The current service is under a recently signed five-year contract, which means no changes would be made to the city’s rules until 2020.

Lack of public transportation had a ripple effect on low-income families’ ability to manage their already limited resources, McClendon said.

“They’re not getting to work. I mean, the list goes on and on,” she said. “They’re not able to get to the grocery store — they’re having to shop at the local convenience mart on the corner and having to pay double the prices. It just guides them deeper into using what limited resources they already have for life essentials. It throws another barrier and obstacle to lifting yourself out of poverty in the process.”

“She knows coming from a family of poverty and not having the resources for tutors, etc., that she has to create her own competitive advantage,” McClendon said. “If she misses school, because she has to be in class to study hard, focus on what she needs, then she gets behind in her education. And then we’re creating, again, that barrier for her staying in poverty.”

Zamudio wasn’t aware of the strike and learned about it too late to find alternative transportation to school. Her family doesn’t own a car. Her home is almost two miles from her school, with no school bus route nearby. Riders like Zamudio cannot afford a taxi or ride-share company and do not own cars.

“I shouldn’t be having to catch up with other students just because I couldn’t get to school,” Zamudio said. “It wasn’t a real reason that I couldn’t go to school. It was something that could have been avoided.”

Drew Rodriguez, who lives in an extended-stay hotel with his wife and 9-year-old daughter in north Phoenix, was unable to attend his daughter’s end-of-quarter school awards ceremony, a regular event he had never missed. Rodriguez said his family relies entirely on public transit.

“It was very hurtful to have to tell (my daughter), and have her tell me that she understands, that we couldn’t show up,” Rodriguez said. “It’s both my wife and my job that she understands and knows that we see her accomplishments, but also that we’re there for her and that she sees us in a crowd.”

Rodriguez and his wife do not work, relying on $1,700 monthly in disability payments from social security and food stamps. For them, a $30 taxi or Uber round trip to the grocery store under five miles away is too expensive.

Valley Metro communications manager Susan Tierney said there were options for low-income riders whose bus routes were impacted, whether finding another route in the area, asking friends or neighbors for a ride or using a resource such as sharetheride.com, which matches commuters to help them find transportation options such as carpools or vanpools.

“I think everybody understands that we have to kind of pull together in a time like this,” Tierney said.

But for Rodriguez’s family, options like these are unreliable. The majority of his neighbors also depend on public transit. He has no contact with family members, and all the routes near his home were either canceled or on a limited Saturday schedule during the strike.

“We really do not have anyone to rely on,” he said. “So the ‘talk to your friends, family, carpooling,’ all of that — hey, those are great suggestions for the people who it is applicable to, but unfortunately, it is not applicable to everyone.”

Though the Route 27 bus near Rodriguez’s home was running with limited service by Tuesday, according to a city of Phoenix press release, Rodriguez’s family still faced spotty bus arrival times.

His wife waited two hours for the bus on Wednesday after grocery shopping, he said. She eventually walked three miles home carrying bags of groceries despite pain from lupus and previous hip surgery.

Other organizations offered some options for riders like Rodriguez. Ride-sharing company Uber tweeted a link for new riders to sign up using a promotional code covering $20 toward the first ride.

Happy to help anyone needing transportation due to PHX bus strike. First time riders, here’s $20 off a first ride https://t.co/dfNyQKuBTy

While Valley Metro offered some limited options for riders like Rodriguez, the real solution, Rodriguez added, would come from the city pressuring both sides to end the strike as quickly as possible.

“A lot of us live paycheck to paycheck,” Rodriguez said. “Having that impact their ability to get to work, and then having to maybe pay extra for cabs, is really taking away from the low-income citizens’ — of both the city and state — ability to survive.”