Two federal courts have blocked implementation of DAPA, an Obama administration plan that would defer deportation of certain immigrants in this country illegally. The Supreme Court has now agreed to review those courts’ rulings. (Photo by Marisela Ramirez/Cronkite News) 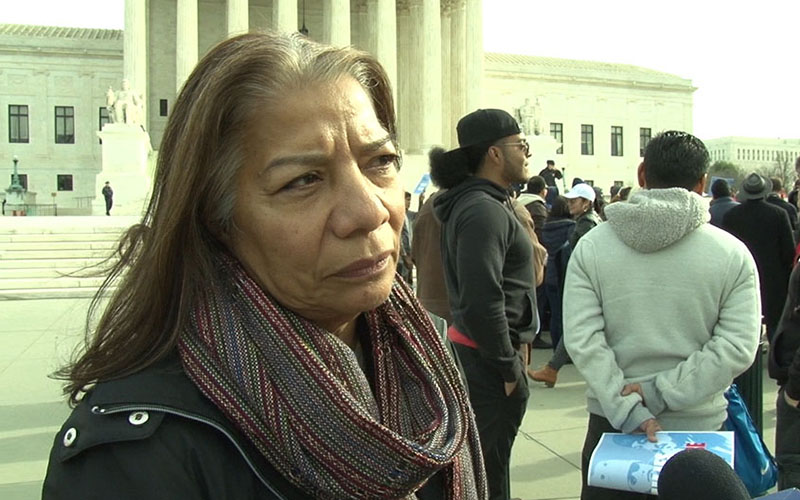 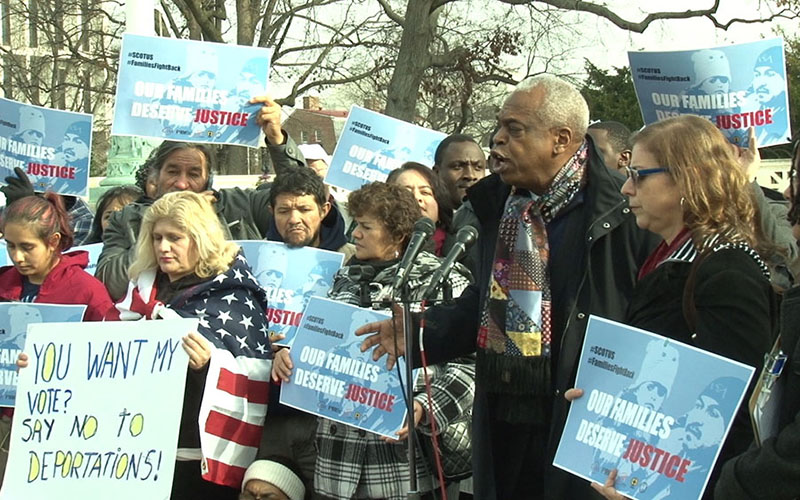 Dozens rallied at the Supreme Court last week in support of the Obama administration’s deferred deportation policies for certain immigrants. But opponents have successfully argued in lower courts that the executive actions are unconstitutional. (Photo by Marisela Ramirez/Cronkite News)

WASHINGTON – The Supreme Court said Tuesday it will hear an appeal of lower court decisions that blocked Obama administration deferred deportation policies that were challenged by 26 states, including Arizona.

The high court’s announcement was hailed by both sides of the debate, with immigration-rights advocates calling it “very, very hopeful news for the community” and critics of the law welcoming the chance to argue a “landmark case involving the separation of powers.”

It came the same day that the court refused to hear a separate challenge to the administration’s deferred deportation policies by Maricopa County Sheriff Joe Arpaio. That case was thrown out by two lower courts and the Supreme Court declined to intervene Tuesday.

The cases challenge President Barack Obama’s executive order on Deferred Action for Parents of Americans and Lawful Permanent Residents – or DAPA – that could protect millions more immigrants who are in this country illegally.

DAPA, announced by the White House in 2014, was an expansion of the administration’s Deferred Action for Childhood Arrivals program that took effect in 2012. Under DACA, immigrants who were brought to this country illegally as children could apply for a deferral of deportation and a two-year work permit, among other benefits.

DAPA would have extended many of those protections to the parents of DACA beneficiaries, or as many as 5 million immigrants between the two groups. But the program was immediately challenged by Texas and 25 other states that objected to the use of executive order and the expenses they said would come with the expansion.

A federal judge in Texas agreed with the states early last year and that ruling was upheld in November by the U.S. 5th Circuit Court of Appeals, sparking the government’s appeal to the Supreme Court to hear the case.

Petra Falcon, head of the immigrant advocate group Promise Arizona, was among the protesters rallying outside the Supreme Court on Friday, calling for the high court to hear the appeal. She said Tuesday that she looks forward to the court’s final ruling in the case, which has been scheduled for an April hearing.

“This is very, very hopeful news for our community, especially for potential DACA and DAPA recipients,” Falcon said. “It’s been very frustrating that we have to wait for this legal process when every president has had the authority to give an executive order.”

The Mexican American Legal Defense and Educational Fund, which is representing three South Texas mothers in the case, welcomed the announcement that the court will review what MALDEF called “the erroneous rulings by the courts in Texas.”

“Today’s order from the Supreme Court raises the welcome and important prospect that this politically motivated lawsuit will no longer hold up the president’s exercise of prosecutorial discretion … and that the nation can implement a more rational immigration practice,” MALDEF President Thomas A. Saenz said in a prepared statement.

But the chief counsel for the American Center for Law and Justice, which filed a brief on behalf of scores of members of Congress opposing the deportation policies, said the Supreme Court will be taking up what he called a ‘landmark case involving the separation of powers.”

“This executive overreach is both unlawful and unconstitutional,” ACLJ’s Jay Sekulow said. “Since day one, we’ve argued that President Obama’s lawless overreach violates the Constitution, and we will continue to make this point clear at the Supreme Court.”

That argument was echoed by Arizona Attorney General Mark Brnovich, who said in a prepared statement that the challenges to DACA and DAPA “are about more than immigration policy choices.”

“We hope that the Supreme Court takes this opportunity to decide whether the president exceeded his constitutional authority by bypassing Congress and unilaterally rewriting our immigration laws,” Brnovich’s statement said.

But while the state has sided with opponents of DAPA, both Santa Cruz and Coconino counties joined briefs on the other side in April, calling for quick implementation of Obama’s deferred deportation plans.

“I think it’s important for the Supreme Court to review the executive action,” Ruiz said. “Hopefully what this will do is maybe get Congress to work together and try to do something to fix the broken immigration system that we currently have.”

Rep. Ann Kirkpatrick, D-Flagstaff, said Congress needs to pass comprehensive immigration reform that “keeps families together, grows our economy and protects our border communities.” Until then, she said, this “critically important case will have a tremendous impact on Arizona.”

“Like so many, I hope the Supreme Court upholds these policies – which help DREAMers, working families and so many others,” Kirkpatrick said of the administration’s policies.

That the immigration system is in need of change – one way or another – is something both sides appeared to agree on.

“Our nation’s immigration laws are complicated and in need of reform through the legislative process,” Sekulow’s statement said. “But differing policy preferences do not provide license to, as President Obama himself admitted, ‘change the law’ on his own.”

“We need to fix the broken immigration system,” Falcon said. “Politicians are playing pingpong ball with families who are hardworking and have strong values.”

Arpaio filed his own suit against the president in December 2014, arguing that the deferred deportation policies were unconstitutional. But lower courts declined to hear his arguments, ruling that Arpaio would not be directly harmed by the policies and, as such, did not have standing to sue.

Neither Arpaio nor his attorney immediately returned requests for comment Tuesday on the Supreme Court’s announcement.

– Petra Falcon, executive director of Promise Arizona, at a rally with dozens of protesters outside the Supreme Court last week, discusses the importance to Arizona of the United States v. Texas case. (Video by Marisela Ramirez/Cronkite News).