Scottsdale and Chandler finished near the top of cities ranked on their job markets in 2016. Experts point to Arizona’s strong tourism and tech sectors, and growing health and financial services. (Photo by Thewmatt/flickr via Creative Commons) 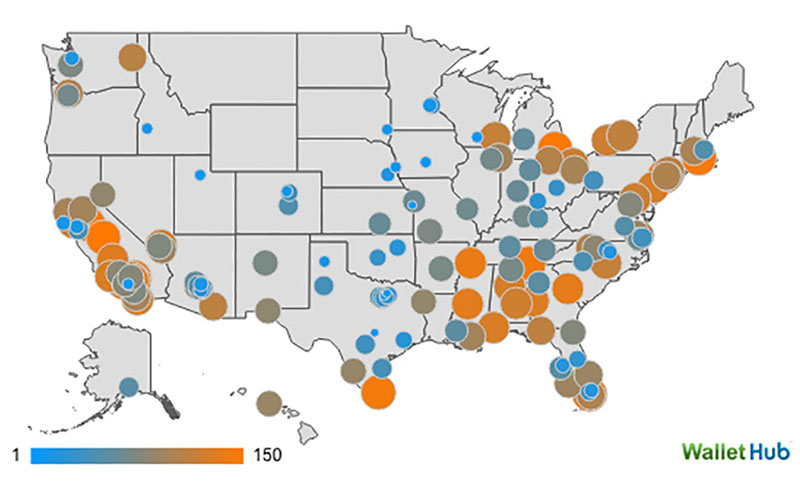 Valley cities did fairly well in a ranking by financial website WalletHub on the prospects for job seekers in 2016. Arizona cites ranged from Scottsdale in 16th place to Tempe at 110 on the list of 150 cities ranked. (Map by WalletHub)

WASHINGTON – Two Arizona cities made the top 20 in a listing of towns with a promising employment outlook in 2016, according to a national report released this week.

The ranking by financial website WalletHub ranked Scottsdale as the 16th-best place to look for a job in the coming year with Chandler in 20th place, driven by thriving hospitality and semiconductor employers, respectively.

“In many cities, when you look at job openings per unemployed people, there’s just not enough to go around,” WalletHub spokeswoman Jill Gonzalez said Thursday. “But that’s something that many Arizona cities are seeing the exact opposite of.”

Scottsdale and Chandler weren’t the only Arizona cities to do well in the ranking of 150 cities nationwide. Gilbert finished in 28th place, while Phoenix was 47th and Mesa was 50th on the list of best cities for job seekers.

How the jobs fare

The website WalletHub looked at 17 factors to rank the 150 largest U.S. cities on their 2016 employment outlook. The nine Arizona cities on the list, and their ranks:

The report looked at the 150 largest cities in the nation and ranked them on 17 factors, including employment rates, industry variety and percentage of employed residents living under the poverty line.

Scottsdale, a hospitality hot-spot, was helped by its resorts and restaurants while Chandler has large semiconductor employers Intel, Freescale and Microchip, said Lee McPheters, a professor at the W.P. Carey School of Business and director of its JPMorgan Chase Economic Outlook Center.

But McPheters said there are other employers to credit as well.

“Scottsdale, Chandler and Gilbert are all growing in the same industries … health care, finance and business services,” McPheters said in an email. “Population is growing and the cities also offer opportunities in jobs that are among the fastest-growing part of the Arizona economy now.”

Health care, Arizona’s largest single industry, is both a high-paying and fast-growing sector, McPheters said. And he said it is well represented in Scottsdale and Chandler, with big employers from biotech companies and the Mayo Clinic to the Chandler Regional Hospital.

It may also be the gift that keeps on giving. McPheters points out that jobs in this field actually continued to grow during the recession.

Arizona cities had another major advantage when pitted against other cities in the study: The top five Arizona places had a relatively low cost of living compared to cities on the East and West coasts.

“Some of the highest median salaries that we saw were in Arizona,” Gonzalez said. “When you add in a lower cost of living, that money really goes a long way.”

The employment outlook ranking comes on the heels of another another optimistic jobs report for the nation from the federal government. The Bureau of Labor Statistics reported that 292,000 new jobs were added to the economy in December, when the unemployment rate dropped to 5 percent. The White House said that was the lowest jobless rate since April 2008.

Also in December, the Federal Reserve decided to slightly raise the interest rate for the first time in six years, determining the economy was strong enough to handle the higher rate.

“Should Americans looking for work be optimistic? The answer is a very strong yes,” McPheters said. “Right now is probably the best time to be looking for a new job since before the recession, or in the last eight or nine years.”

WalletHub’s Jill Gonzalez explains Scottsdale’s and Chandler’s rankings on its list of the top 20 cities to look for a job in 2016. (Video by Lauren Clark/Cronkite News)