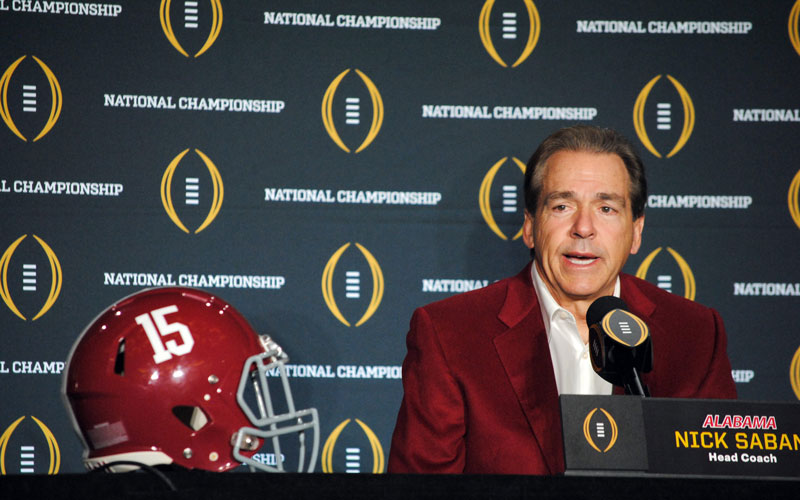 The junior tight end racked up two touchdowns and 208 receiving yards in Alabama’s 45-40 victory over Clemson on Monday. On Tuesday, he awoke to his future: Should he declare for the NFL draft or finish his college football career in Tuscaloosa?

“Once I sit down with coach (Nick) Saban and my family, coach will help us make the right decision,” Howard said. “He’s always done that for me since I’ve been here at the university.”

Saban and his counterpart, Clemson coach Dabo Swinney, share the same sentiment when it comes to making the right “business” move regarding the NFL Draft.

There were a record 98 underclassmen who entered the 2014 NFL Draft, 74 in last year’s draft and 86 juniors have already declared for this year’s draft, including two from the Tigers.

NFL underclassmen are allowed to request evaluations for early entry into the draft in late-December, regardless of when their college football season ends. Saban and Swinney want the NFL to move that date back until the player’s season ends.

“So that you don’t put them and their family in this situation where there’s a big timing issue relative to competition,” Saban said. “If you’re finishing it on Jan. 11, then you get the information after that, but you have a significant amount of time to make that decision when you finish playing. So you can stay focused on what you need to do to play well, because it benefits all these players to play well in the game.”

The NFL has made changes in the system, including limiting the number of players from each school who can request evaluations to five.

Even with 2014’s record number of underclassmen, there is a downward trend in the number of players who request early evaluations thanks to that change. In 2014, 214 juniors requested a draft grade from the NFL compared with 149 last year, according to NFL Vice President of Football Operations Troy Vincent.

“There’s no doubt, it’s a distraction that all of us have to deal with,” he said. “You get the grades, and some guys, they didn’t get the grade that they want, so they’re pouting a little bit, and got to pick themselves up.”

Clemson will lose at least linebacker Travis Blanks and defensive end Shaq Lawson to the NFL. Cornerback Mackensie Alexander is reportedly also considering the jump to the NFL.

Saban says he and his staff work hard to help their players make the right decision.

There have been other Sun Devils, most recently wide receiver D.J. Foster, who have had the opportunity to declare early but stayed through their senior year.

The University of Arizona will lose two juniors to the NFL, after linebacker Scooby Wright III and wide receiver Cayleb Jones declared for this year’s draft.

Saban understands the appeal of the NFL. A player drafted in the first two rounds has the chance to make a lot of money playing the game he enjoys. Saban recognizes that the allure of the NFL is hard to turn down when it comes calling.

“But sometimes that’s not the best thing for them to do at that particular time,” he said. “The NFL is not going to go away. They’ll have all those opportunities next year.”