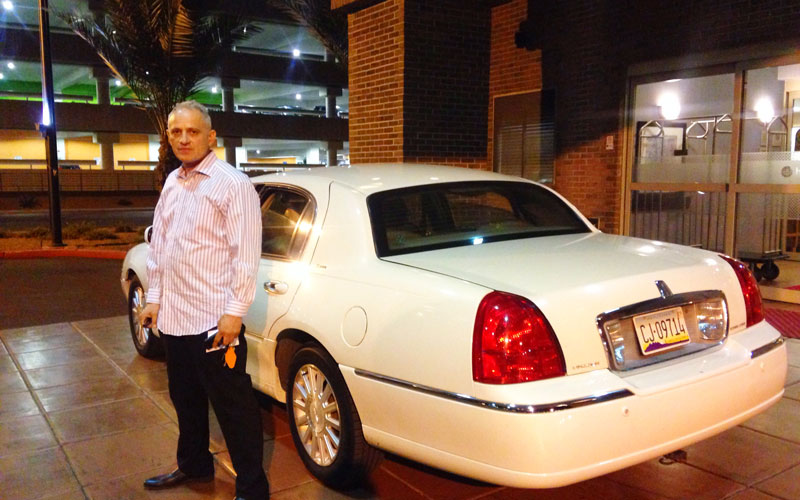 Taxi driver Sunny Rruka has been his own boss for more than 10 years. After purchasing a car and commercial insurance, he’s driven thousands of miles transporting tourists and locals around the Phoenix metro area. (Photo by Amy Edelen/Cronkite News)

Independent workers, which include contractors, consultants, taxi drivers, web designers, technology developers, artists and freelancers, contributed more than $1 trillion to the economy in 2014, according to a report by Virginia-based MBO Partners, a management services firm.

There are more than 17.8 million full-time independent workers in the U.S., and that number is expected to rise to 22.1 million by 2020, according to the report.

The Phoenix metro area also has experienced a rise in independent workers, with more than 291,000 one-person businesses registered in 2013 — a 19 percent increase since the pre-Great Recession year of 2006, according to U.S. Census Bureau data.

“Arizona per capita has more solo entrepreneurs than any other state,” said Rick Murray, CEO of the Arizona Small Business Association. “The main reason is that a lot of people are coming here in the second half of their career. They get here and rather than getting a job, they start their own consulting business or whatever business that might be.”

Although Arizona ranked near the bottom of the list of 40 metro areas surveyed for small business activity in the Kauffman Foundation’s Main Street Entrepreneur Index, which was released in December, the report also indicated an increase in Phoenix micro businesses.

Micro businesses – which have one to four employees – make up about 52 percent of all small businesses in the Phoenix metro area, which is a slight increase from 46 percent in the mid-1990s, said Arnobio Morelix, a senior research analyst at the Kauffman Foundation.

Phoenix had 687 small businesses (under 50 employees) per 100,000 people in the 2015 ranking. The previous year, that number was 668 small businesses, according to the report.

Benefits of solopreneurship
While solopreneurship is closely related to entrepreneurship, it differs in that most one-person businesses don’t intend to hire employees (although they may hire other independent contractors for specific jobs) and don’t plan for rapid growth or an exit strategy.

Tempe resident Matt Simpson worked at a Fortune 500 company and at Phoenix-based startup Bulbstorm before making the jump to solopreneurship.

“I wanted to be an independent consultant dating back to the recession,” Simpson said. “I was working in corporate America and wasn’t terribly happy.”

When another company acquired Bulbstorm, Simpson started his own consulting business that offers sales, marketing and website services to companies.

Simpson sets his own work schedule and hours, decides who he works with, and chooses his own benefits package.

There’s a lot of independence and freedom in solopreneurship, he said.

Taxi driver Sunny Rruka has been his own boss for more than 10 years. After purchasing a car and commercial insurance, he’s driven thousands of miles transporting tourists and locals around the Phoenix metro area.

Rruka chose to work solo because, like Simpson, he can set his own hours. Also, he doesn’t pay a share of his earnings to a taxi or rideshare company, which means more money to go toward operating his business.

“If you know how to run a business, you can establish a pretty good cash flow,” he said. “As business grows, as long as you give good service, people call back and you build your clientele. The more you put yourself out there, the more business is going to come to you.”

People are successful in the independent workforce when they build confidence and have a network through referrals, said Gene Zaino, CEO of MBO Partners.

“Most of the people find work through people they know, or building up their reputation,” he said.

Independent workers often care more about control and flexibility of their work schedule rather than money, Zaino said.

About 61 percent of full-time solopreneurs said they started their own businesses for the ability to create their own schedule, with more than half surveyed said they are independent workers by choice and satisfied with their work, according to MBO Partners.

“It’s really a lifestyle choice at that point,” Murray said. “In most all cases, the reason somebody is their own boss is they want to have complete control over their destiny.”

Challenges of solopreneurship
Some solopreneurs struggle with creating a consistent revenue stream found at a typical full-time job, Simpson said.

“In corporate America, you know what you are going to make in a year,” Simpson said. “When you are a solopreneur, you have to decide what it is that I need to make it financially to cover my bills and cover what I want to have. There’s a big financial component to going out on your own.”

Simpson said he doesn’t get caught up in the fear and insecurity of financial ups and downs, but he misses the team aspect of growing a company.

“You work alone a lot, and you lose some of that shared mission and camaraderie that comes with working with a company,” he said. “Some solopreneurs struggle with that.”

The atmosphere of co-working spaces can help solopreneurs feel less isolated, he said.

Rruka said because of increased competition from rideshare companies such as Uber, he often works 10 hours a day or more to keep his taxi business afloat. But, he doesn’t let that stop him.

Although Rruka has been an independent worker for more than a decade, he eventually wants to expand his business.

“Any business that you put your mind to and put effort into it, you are always going to succeed no matter what,” he said. “I want to grow my business and have a few more cars and put people to work.”

Future of solopreneurship
Solopreneurs aren’t just people looking to exit corporate America – some have yet to enter it. Out of all independent workers surveyed, 30 percent were millennials (ages 18 to 34).

“They are quickly becoming a significant majority of the workforce,” Zaino said. “I think the main reason is they’ve grown up at a time where hitting the job market wasn’t easy.”

Because millennials know and understand technology, it’s easier for them to work in a non-traditional fashion, Zaino said.

“From a behavioral aspect, it is pretty clear that they are the more work-to-live generation,” Zaino said. “They want to do independent work because they truly want to do something that makes a difference.”

More students start businesses because they feel passionately about what they create, said Sidnee Peck, director of the Center for Entrepreneurship at Arizona State University’s W.P. Carey School of Business.

“Millennials, in part, are known for seeking purpose in their work,” she said. “Sometimes with a generation or two ahead of them, it’s a little harder to go off on their own due to responsibilities, whether it be a family or other reasons.”

The chambers of commerce in Gilbert and Fountain Hills offer networking meetings specifically for solopreneurs. The Arizona Small Business Association also offers training and a mentor program for solopreneurs and small business owners.

“Sometimes we get into a cocoon working in a home office most of the time and are not able to reach out and connect with people that could assist us in reaching our dream,” Murray said. “I think for any small business owner, the most important piece of success is to have that trusted advisor/mentor that you can call and ask questions.”

Although the traditional risks of starting a small business still exist, experts said the risks are lower for solopreneurs compared with entrepreneurs who may work with a team or have investors.

“I think the landscape of employment is changing across the board,” Peck said. “People are changing careers every three to five years, instead of 20 years. The way we are employed and the way we think about jobs will change in the future. But, we will always need entrepreneurs that take risks and fill the need that people have.”

In the last decade, Arizona has made regulations and taxing issues more favorable to one-person businesses, Murray said.

“We want that economy,” he said. “We are creating jobs. Every time somebody decides to be their own boss, they are creating a job.”

Independent workers by the numbers
Create your own infographics
Share this story: