Jonah Hill uses a thin saw blade to cut his bracelets. This one is part of a series called River’s Edge, meant to mimic the waves of the Colorado River. (Photo by Lynnie Nguyen/Cronkite News) 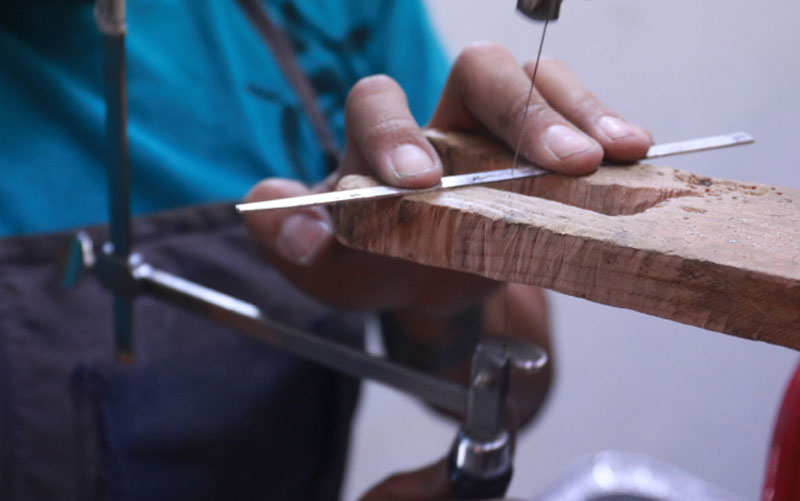 Jonah Hill uses a variety of tools to make his jewelry, including hammers, mallets, files and saw blades. (Photo by Lynnie Nguyen/Cronkite News) 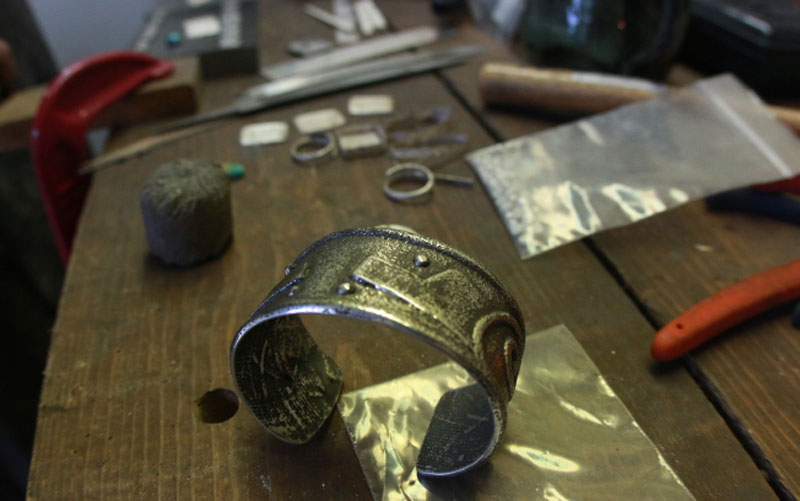 Silversmith Jonah Hill, who is Hopi-Quechan, uses sterling silver, among other materials, to make jewelry. (Photo by Lynnie Nguyen/Cronkite News) 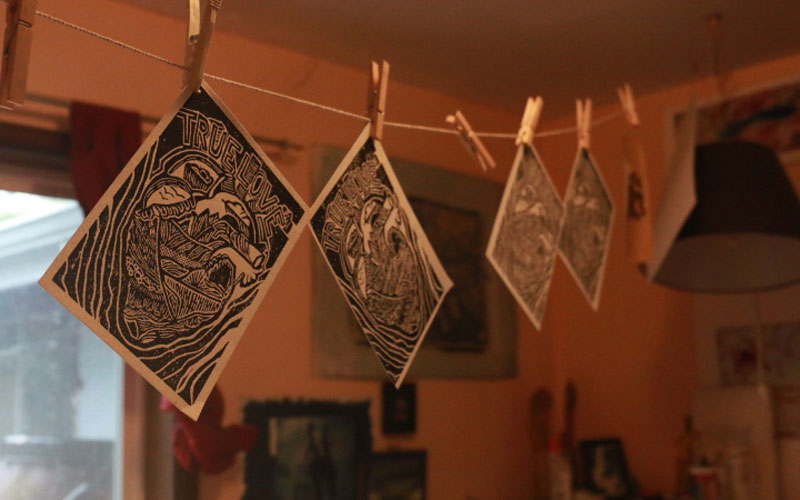 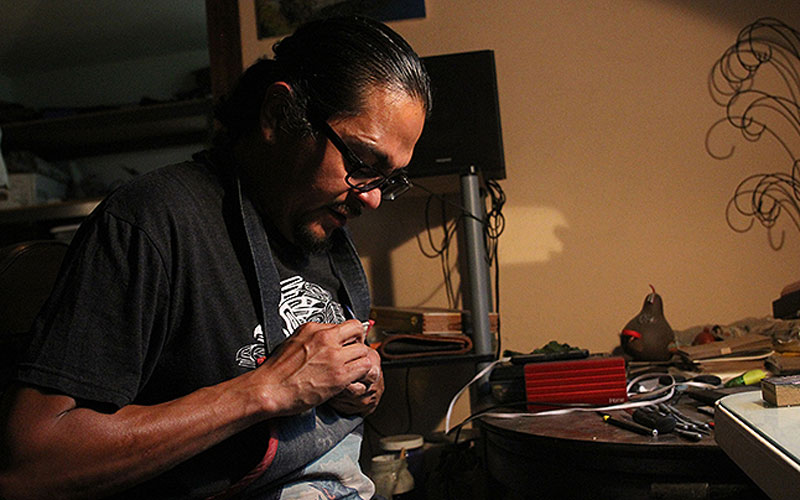 “My work helps to keep that little kid alive and strong and reawaken that inner child,” said Gregory Hill, who makes about 50 tops a month. (Photo by Lynnie Nguyen/Cronkite News) 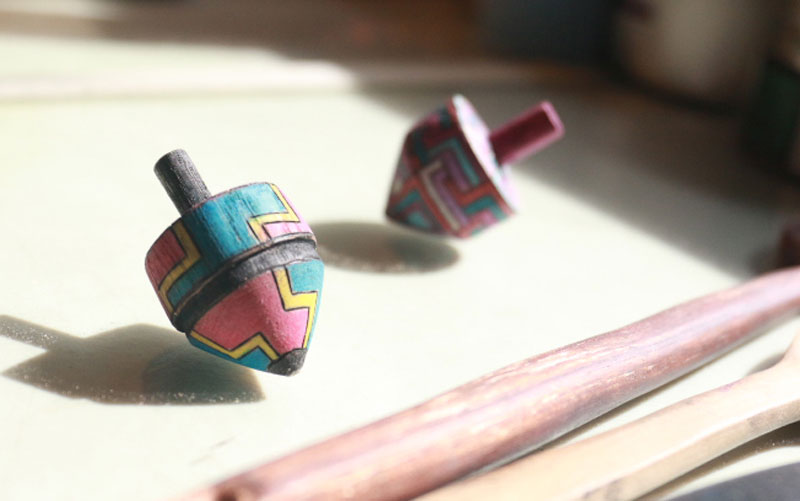 Toymaker Gregory Hill often spends up to 19 hours a day carving and painting tops to keep up with demand. (Photo by Lynnie Nguyen/Cronkite News) 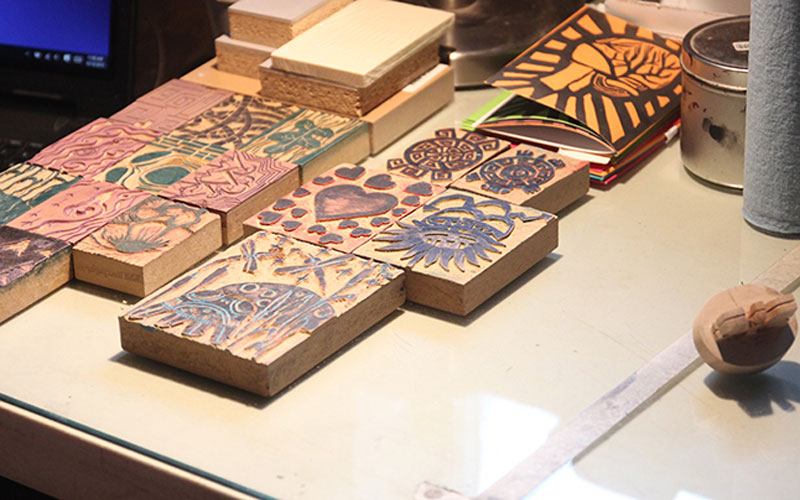 “When I started, I didn’t know how to value my worth, like most artists,” Jonah Hill said. (Photo by Lynnie Nguyen/Cronkite News)

Hill, who is part Hopi and Quechan, often works on his trade 19 hours a day to keep up with demand for his tops.

“A top is one of the few toys that has the same method of play around the world,” Hill said. “All I need to do is spin the top to draw people in.”

He said he wasn’t prepared when crafting the tops turned into a booming business. He lacked access to resources, struggled with confidence and found it difficult to market his product.

The population lags behind in business ownership because of numerous factors, including lack of education, cultural obstacles and a high poverty rate, said Adrian Manygoats, an incubator coordinator at the Native American Business Incubator Network.

“We’re in a time now where business are not just focused on making money, but they’re realizing the importance in giving back to the communities they’re from as well a the cultures they’re a part of,” Manygoats said.

How the network works
The incubator opened in 2013 and has launched businesses such as Shash Diné Eco Retreat. Shash Diné is Navajo-owned bed and breakfast near Page. The owners wanted to give guests an authentic and unique Navajo experience.

The network helped the business with marketing, branding, business counselling and graphic design. Within three weeks of launching the shashdine.com website, the bed and breakfast was booked for the entire tourist season, Manygoats said.

The incubator has a unique understanding of the Native American communities across the Southwest, according to its website. And the employees work to overcome the “red tape” often found in those communities.

“There are huge cultural ties to the work that is produced here,” Manygoats said.

Manygoats said that keeping up with Native American tradition and being a successful entrepreneur in the modern world is somewhat of a balancing act: “There’s a challenge of walking in two worlds.”

“You want to stay true to who you are, and you want to really continue to value those cultural things you grew up with,” she said. “But when you leave the reservation, you don’t have access to that.”

After leaving the reservation, it’s easy to become disconnected with your community and community traditions, Manygoats said. In tribal cultures, it’s important to go home and spend time with family often.

Manygoats’ main responsibility at the incubator is to help entrepreneurs like Hill get the exposure and training they need to succeed in the entrepreneurial world.

“It’s difficult for Native Americans to start a business because we’re trained to be noble, humble and quiet,” he said.

He said he could have used the help of the incubator. His advice for making it in the business world: Overcome the idea that you have to be quiet.

Gregory Hill and his identical twin brother, Jonah Hill, are both artists. After leaving the reservation, the brothers carried on family traditions by working with their hands.

Jonah Hill owns a jewelry business called Loma’Yoo’Si Designs, which means “bringing beauty” in the Hopi language. Bringing beauty to others through his jewelry is his purpose, he said.

“It’s a lot more empowering for Native people to do what they love and make money, but also still stay in touch with their community,” Jonah Hill said.

Tourists, locals and river guides make up Jonah Hill’s customer base. He said he’s grateful that his own community supports him and his work.

The Hill brothers said they haven’t struggled with community support – making jewelry and carving wood is a common trade in their culture.

But some Native American entrepreneurs have faced difficulties with community support.

Jerome Tsosie said his biggest obstacle is getting his own community on board with his business and the services he offers. Tsosie is the president of Native Innovation Inc., a tech startup that provides tech solutions for Native Americans on and off the reservation.

“Having the buy in from your own people is tough,” Tsosie said. “People on the reservation have been treated badly for so long that they expect it.”

When settlers expanded territory in the United States and moved Native American tribes to reservations, it resulted in a loss of opportunities for wealth and success among tribes, according to a 2014 study on Native American small business ownership published in the Research in Business and Economics Journal.

The government, other vendors and their own people have treated Native Americans poorly for decades,Tsosie said. Accepting help, especially from other Native Americans, is hard, he said.

Tsosie has to combat that broken relationship within the community on a regular basis through his work, he said.

“I’m picking up the pieces and trying to mend it,” said Tsosie, who is based in Flagstaff.

Many Native American entrepreneurs face difficulties finding capital to start their business, and it’s rare to find investors in “communities where most of the population live below the poverty line,” according to the network’s website.

But fostering Native American entrepreneurship may reduce the poverty rate among the population, according the 2014 study.

“Although contracting smaller businesses is a little more risky, it is much more valuable,” she said. “Native entrepreneurs are more versed in the community, and they know what the community needs.”

Tsosie grew up on the Navajo reservation in Rock Point. He’s seen the struggles on the reservation and said this enables him to help his community better through his business.

“It definitely gives me more purpose,” Tsosie said. “We’re helping schools by providing services that they would otherwise have to pay an arm and a leg for.”

His company provides tools to help Native Americans communicate. And he scored a win with a major company in July.

After emailing Google every other day for three years, Tsosie said he and his business partner, Kialo Winters, convinced Google to add the Navajo keyboard to Google Docs.