Rick Mead, left, and Jimmy Donnelly take a break outside the Andre House before lunch. Donnelly was on the streets and stayed at the shelter before winning a housing lottery ticket. He’s now head of security at the shelter. (Photo by Brooke Stobbe/Cronkite News) 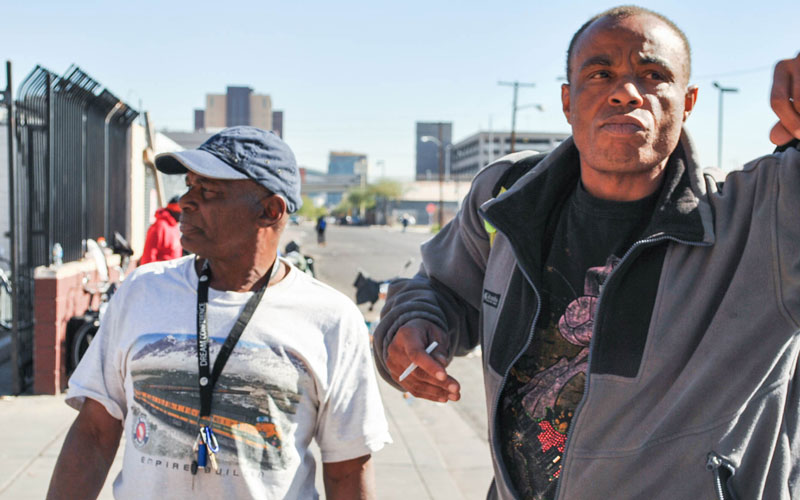 Myron Fields, right, and Ephriam Martin smoke outside the Andre House in downtown Phoenix after the morning Mass. Fields has been off the street for about a year, and Martin volunteers at the shelter. (Photo by Brooke Stobbe/Cronkite News)

Run by both religious groups and the City of Phoenix, each provides men and women basic living necessities and professional assistance with transitioning out of homelessness, a period averaging about three months, according to the National Coalition for the Homeless.

Of the services offered, few help those participate in one of the most basic civil rights awarded to American citizens — the right to vote. Both local and national election processes present the difficult tasks of finding a ballot, getting to a voting place, accessing election information and acquiring the necessary identification to register and cast a vote.

Map: Homelessness in the United States

Scott Williams, a homeless guest at the André House of Hospitality in downtown Phoenix, is registered to vote, but hasn’t voted since 1980, when Ronald Reagan ran for president.

“There’s so much to memorize, and those materials are hard to come by,” Williams said. “I don’t like it.”

Samuel Richards, executive director at Protecting Arizona’s Family Coalition, said Williams’ attitude is common among those experiencing extreme poverty, and that most of the people he and the organization work with don’t vote.

“Only 30 percent of people in Arizona that make $20,000 or less [each year] are registered to vote,” Richards said. “Said another way, there’s a 70 percent voter registration gap among people experiencing poverty.”

George Pillsbury, senior consultant of NonProfit VOTE, also said his organization frequently runs into complaints like Williams’ in their work.

Just as it is difficult to track each person who experiences homelessness, it is hard to determine just how much of the homeless population is registered to vote. When asked how many homeless voters are registered just in downtown Phoenix, Elizabeth Bartholomew of the Maricopa County Recorder’s Office said there are 82 active voters and 68 inactive voters — those who haven’t updated their voting records — registered at Central Arizona Shelter Services.

She also said that those without a permanent address may mark a shelter, church or specific point on a map when they register.

The prevalence of voter ID laws has long been a source of controversy and confusion. According to Ballotpedia.org, a website that monitors American politics, 32 states currently have voter ID laws in place.

Seventeen of those states require photo identification, and 15 will accept other forms, including bank statements with home addresses, utility bills or paychecks. Retrieving official IDs and state documents, such as birth certificates, and filing the necessary paperwork is deterring for the homeless, as the process can quickly become time-consuming and expensive.

“Voter registration is not easy for the majority of Americans, but it’s particularly [difficult] for those without a residence — the homeless,” Pillsbury said. “There are significant obstacles in filling out a valid voter registration form and having that accepted by the county clerks whom they have to turn it into.”

Arizona attracted national attention for its voting practices in 2013, when the Supreme Court struck down parts of Proposition 202 that required some voters to provide proof of citizenship before they register, according to the National Conference of State Legislatures (NCSL) website.

The law struck a chord with human rights activists who claimed the law was targeted at making the process of voting more difficult for the Latino and Native American populations. The NCSL wrote that proponents of the law argued that it would decrease in-person voting fraud.

The state now keeps two separate voting lists, one for voters who qualify for state elections — those who have proof of citizenship — and one for federal elections — everyone registered either with or without proof, according to the Arizona Department of State.

Although the particular law didn’t directly apply to the homeless population, it points to a bigger issue of confusion among voters and even voting organizations.

When asked for an interview for this story, a representative from the American Civil Liberties Union of Arizona responded in an email saying “no one here feels like they have the expertise to comment on this issue.”

This isn’t a problem exclusive to Arizona, experts say.

According to Brian Davis, executive director of the Northeast Ohio Coalition for the Homeless (NEOCH,) this lack of communication, education and understanding of the law is mirrored in polling places. Often operated by volunteers on election day, he said poll workers sometimes turn homeless voters away if the address on the I.D. fails to match the address listed in the poll book, or if an address is listed as a park bench in a neighboring city.

“It’s a very difficult system,” Davis said. “[It’s] complicated further by the fact that there are many volunteers who are working on election day that may or may not understand these voluminous rules that we have.”

Davis said Cleveland is one of the few cities in the United States with a program to assist the homeless in attaining IDs.

“I think that homeless people of all of the population’s need an ability to petition their government for change,” Davis said. “If they’re not able to participate in voting, how will they have the ability to call for a change in national priorities? It’s really important to find out a way for low income, minority individuals to participate in the process.”

Members at the André House and other local activists formed a small neighborhood group called MASH (Maricopa Alliance for Shelter and Housing) in efforts to work with local policymakers, advocates and the homeless.

To help get their guests become involved politically, MASH hosted a forum for members of the homeless community to speak to legislators to express their needs, concerns, stories and situations. About four months later, they conducted a small march around downtown Phoenix to raise awareness for better housing and shelter accommodations.

“Certainly some of the guys got involved in almost an advocacy or grassroots-spirit during the march,” said André House director of finance and administration Jay Minich. “I think that was good.”

Davis said that in Ohio, there is a dramatic inconsistency with the number of homeless voters who receive provisional ballots. While, in theory, each county should accept the same number of provisionals, this is not the case. He said everyone should have an equal chance to have their ballot counted.

“The reason that we do so much with voting is [because] it’s a core civil rights issue,” Davis said. “We have always, in the history of our coalition, worked on the right to shelter, the right to be able to vote. We see the voting as part of a larger civil rights agenda to make sure homeless people are not shoved under a bridge and forgotten.”

Myron Fields has been visiting the André House for the past five years. After being convicted and losing his right to vote, Fields took an interest in business and politics, and he hopes to study both subjects at Arizona State University to learn about governmental policies and processes.

“That’s why I’m studying politics, to learn how get my rights back,” Fields said. “It’s not just about me … it’s bigger than that.”

Organizations in states across the country — like PAFCO, NEOCH, and NonProfit VOTE — are beginning to dedicate their time and resources to educating both the homeless and the government on how to address the most common drawbacks homeless people face when voting.

“We do days of action, and in addition we have a number of ongoing programs at a number of service delivery operations,” Richards said. “One example is we often work with ICM, which is a food bank, and every time an individual goes to ICM [Food and Clothing Bank] to get a food box or something for whatever circumstances brought them there, part of the experience is an opportunity to register to vote.”

While shelters and service providers in the Valley can help the homeless by providing a mailing address for registration purposes, a lack of information and transportation can still make it difficult for residents and visitors to complete the process.

“We actually push the PEVL, the permanent early voter list, quite hard,” Richards said. “That way you can actually vote right from home. That takes the transportation issue right off the table.”

“Stop thinking of us as a problem,” Donnelly said. “We’re people with problems, but we’re not problems. We get labeled as misfits and junkies, but we’re not. If you give these people a decent job and an honest shot, like I got, and you’d be surprised.”