Young boys and girls danced at the block watch celebration of Estrella Super Mom’s. It was one of many festivities held during the citywide Getting Arizona Involved Neighborhoods events. (Photo by Erica Lang/Cronkite News) 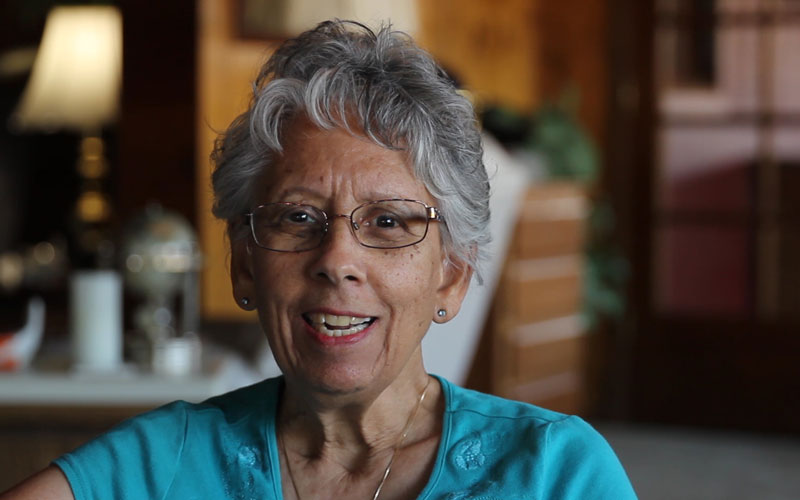 Carolyn Peace and her husband have lived in the same cul-de-sac in Maryvale for 42 years. (Photo by Erica Lang/Cronkite News) 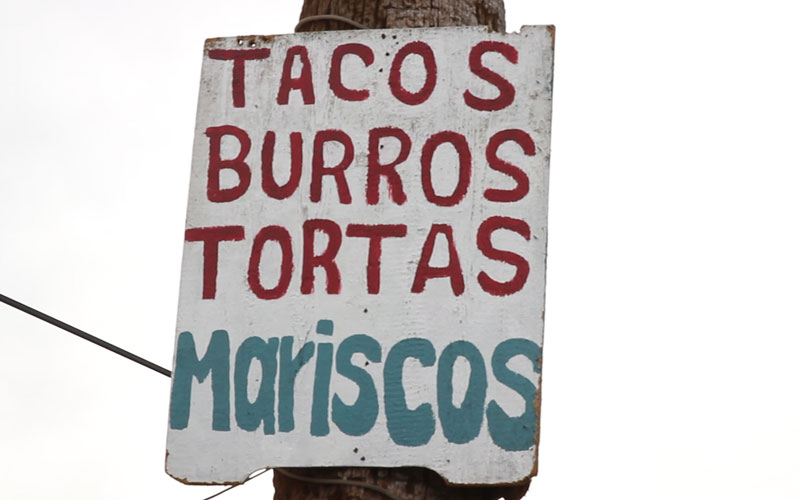 A restaurant near 43rd Avenue and Thomas sells authentic food for a Latino demographic. (Photo by Erica Lang/Cronkite News) 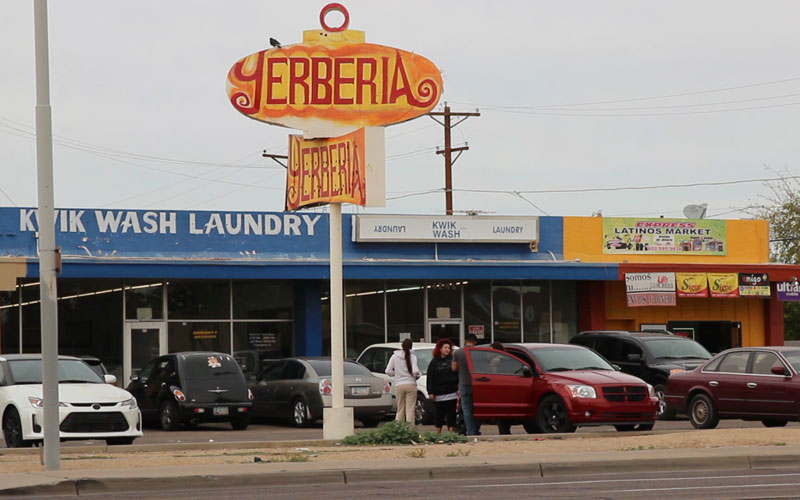 Local businesses such as the Latinos Market near 43rd Avenue and Thomas cater to the surrounding Hispanic population. (Photo by Erica Lang/Cronkite News) 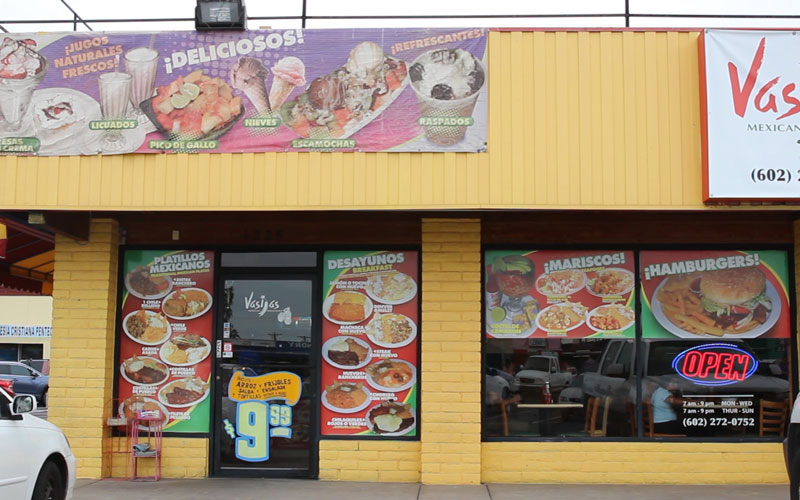 Restaurants such as Vasijas are one of many in Maryvale that sell authentic Mexican food to the community. (Photo by Erica Lang/Cronkite News)

Forty-three years ago, Martha Garcia and her then husband bought their first home in Maryvale for $12,000. Bounded by 51st and 59th Avenues, Thomas and McDowell Roads, she was the only Latina on her block.

Today, Garcia’s neighborhood reflects an emerging change. “On my block, there’s only two Caucasians, there’s one African American family and the rest are all Hispanics,” she said.

Suzanne Thraen and her husband Rex settled in Maryvale’s Tomahawk Village neighborhood 40 years ago after his last assignment in Europe with the U.S. Air Force.

At the time, mostly military families lived in Tomahawk Village.
Named for the nearby elementary school, the community is a one square mile radius bordered by 75th and 83rd Avenues, Indian School and Camelback Roads, with a little over 2,500 homes.

There, too, the shift has been dramatic as the ever-growing Latino population continues to change the demographic landscape of Phoenix and Arizona. Today, the Maryvale population sits at about 200,000, more than 75 percent being Hispanic, according to statistics from the City of Phoenix Planning and Development Research Team.

Carolyn Peace moved from Wilcox to Maryvale in 1971 to teach kindergarten. She taught in the Cartwright District where she met her husband John, who was teaching fifth grade.

For 42 years, they have remained in the same cul-de-sac. All her neighbors are Hispanic.

“We don’t know as many people in the neighborhood as we did,” adding that many of them only speak Spanish, making it difficult to communicate.

Maryvale’s businesses — selling “mariscos,” “raspados” and “carne asada” — reflect a neighborhood that has become a majority minority. A 2014 report from the Pew Foundation shows that Arizona’s population is 30 percent Hispanic, making it one of five states with the largest Latino demographic after Texas.

At 75th Avenue and Thomas Road, Mercado de Los Cielos sits within Desert Sky Mall, a shopping center that has changed dramatically over the years to reflect the community.
Once, a long-gone Montgomery Ward and Mervyns attracted customers, now it’s a quinceanera dress shop and Cinema Latino, which shows Spanish movies.

“Eighty plus percent of our customers are from Hispanic descent and were the first, second or third generation Hispanic,” said Zeke Valenzuela, the mall’s manager.

“Hispanics shop as families, it’s not just mom and pop, it’s grandpas, grandmas, uncles…. and all of that and so you create an ambiance where families, entire families, come together. And the Mercado offers that, it gives you a glimpse back at possibly the country you came from,” Valenzuela said.

Remembering the past is easy for Thraen. She recalls a time when the economy soured in the 1980s and many people in Tomahawk Village began selling their homes, which then became a glut of rentals.

Overgrown weeds became common and chipping paint added to the deteriorating conditions of homes. The community’s blight was no longer unavoidable, putting it on the federal government’s list for assistance.

“A neighborhood that was now on the list for the need by the federal government. We became eligible for that a long time ago,” Thraen said.

When the people moving are trying to put food on the table, grass in the front yard has a very low priority, she said.

Tomahawk Village’s struggle with graffiti and upkeep is not unique. The one square mile block mirrors the surrounding changes in the larger Maryvale area, the first master planned community in Arizona.

It began with the vision of John F. Long, who realized the need for housing and infrastructure for mostly veterans coming out of World War II. By 1958, he was the top builder of affordable homes in Arizona.

“Maryvale was the first master planned community in all of Arizona,” said Jim Miller, the Director of Real Estate at John F. Long Properties. Long provided land for churches, schools and parks.

By 1975, however, Marvale residents began moving north into new-gated subdivisions with swimming pools.

“So Maryvale people started trading their 20-year-old homes or so and started moving up to the suburbs,” said Vania Fletcher, a development planner for the City of Phoenix. During the 1980s, a new population of Hispanic families began moving in.

On Devonshire Avenue, it’s a similar story. Thraen’s neighbors reflect the continual growth of the Latino population and the challenges that have surfaced.

Thraen remembers one neighbor “who was just as sweet as she could be, didn’t speak a word of English… and she had never lived in a house that didn’t have anything but dirt floor.”

Her idea of cleaning the floor, Thraen remembered, was to turn on the hose and wash the tile through the house, out the back door and into the swimming pool.

“It took a few years to get across to her there were other ways that could be done.”

Thraen realizes her one block is a small example. “We’re just a microcosm, we’re nothing but a fly speck on the butt of a hippopotamus. What makes it any different? Well, we just live in it.”

At 75-years-old, Thraen spends her retired days as if she never stopped working — looking after the community she calls home. A shiny blue-grey Sebring convertible is parked in the garage and she admits, “I love to drive it with the top down.”

But perhaps what her neighbors see her driving more often is the golf cart that sits next to the Sebring with an “I heart Maryvale” bumper sticker on the back.

It’s a means to go around the neighborhood, say hi to the children, Thraen said, her lip quivering slightly. “To listen to the stories of people, to cry with people when their loved ones die or when they go away.”

As she zooms around the residential streets of Tomahawk, she’ll shout, “Pick that cup up, it doesn’t belong on the ground,” to the kid who dropped it a few steps away. Or she’ll follow a group of girls who left a six-pack of empty bottles on the street, pulling up
in front of them, “You think we need to speak to your folks about littering?”

But her commitment to improving the neighborhood is not a job for everyone.

Octavio Aboytes bought his first home in Maryvale 21 years ago and as his three kids grew, so did the Latino population around him. After noticing problems in the neighborhood — trash, drug activities, robberies — he decided to participate in Tomahawk’s block watch.

Phoenix Vice Mayor Daniel Valenzuela, who is from the Maryvale area and raised his children there, acknowledges there are problems, but says the community still is vibrant with success stories.

“We’re football coaches and baseball coaches, we work with nonprofits and help create nonprofits,” he said. “It’s a very special place where gold medalists are born, like Henry Cejudo, and future hall of fame football players are from, like Darren Woodson and amazing artists like CeCe Peniston,” he said.

He concedes, however, that Maryvale has in some ways has been underserved. For example, while widely used, the transit center on 75th Avenue and Thomas Road lacks the amenities of the state-of-the-art transit center just west of it.

“If you go out there, you would see a couple of benches, no amenities, no restroom, very little shade, now think about that for a moment,” Valenzuela said. “This is the highest used transit center in the Valley.”
For Dé Vargas, a long-time Tomahawk resident, the issue is about ethics and values.

“Bottom line, I think everybody has to have a commitment to love your neighbor as yourself, who’s your neighbor, who’s next to you, it has to be a value,” she said.

Vargas points to one-square block and the abundance of auto title lenders and cash loan storefronts in their community and the surrounding Maryvale area. Grocery options are limited with mainly Latino grocery stores — El Super, Ranch Market and a Fry’s with a mercado inside.

“It’s a struggle, it’s a continual struggle,” Vargas said. “We’re down in the trenches so to speak.”

Aboytes said he plans on moving.

“I’m moving in the next six months,” saying his new home will be in North Phoenix, near 51st Avenue and Deer Valley Road. “I think it’s time to move, honestly.”

But that time may never come for Thraen, who has been asked by many times if she’ll ever move to Sun City. Her response is always no.

“I cry because I don’t see very many people out of that community that have been here 10, 15 years or even 20 or 25 who will stand up like Vargas,” she said. “So the old, white-haired people around here, whether you’re Mildred and Billy and you’re black, or you’re Eric and Gene and you’re gay and black and white, or whether you’re a little person in a wheelchair and you’re name is Leticia, there’s lots of people in this neighborhood.”

As she scoots around in the golf cart, she looks at to her right and sighs, “All these homes have stories.”

She drives the golf cart back into her driveway, puts it in park and waves to a couple that just bought the home across the street.

It’s time for Thraen to welcome the new neighbors.