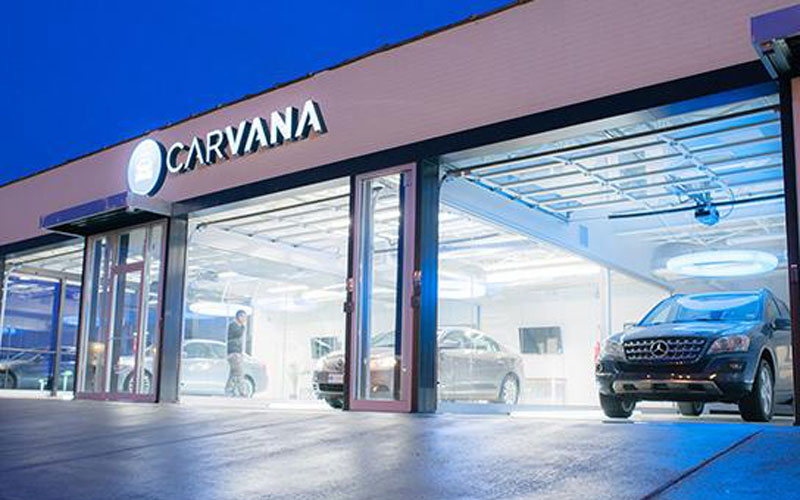 The Carvana vending machine in Atlanta “dispenses cars like soda,” according to the company. (Courtesy photo) 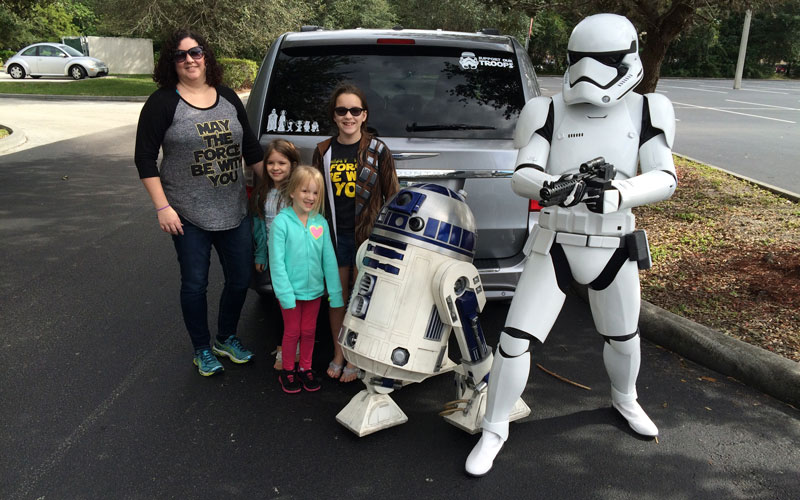 Katrina Beckham and her daughters pose next to their new minivan purchased from Carvana. (Courtesy photo)

The couple works full time and finding the time to car shop was difficult. Still, they made their way to a dealership, but they weren’t satisfied with any offers.

Katrina Beckham decided it was time to try something different. She remembered a commercial for Carvana, a company that sells vehicles online.

Carvana, which runs all its corporate functions out of Phoenix, allows people to browse and shop for used vehicles online. The company delivers the car straight to the customer. Customers have seven days to test out the car – as long as they don’t drive it more than 400 miles – and return it. The company also provides financing options and gives instant trade-in offers.

Earlier this year, Forbes put Carvana on its 2015 America’s Most Promising Companies list, placing it fifth out of 100 companies. The magazine called the company’s growth “profound.”

The company launched in 2013 and made $4 million its first year and $45 million last year. Phoenix native Ernie Garcia, Carvana CEO and founder, said the company will make well over $150 million by the end of this year.

The car vending machine represents what they do as a business, Garcia said. The vending machine keeps costs down while still satisfying the demand for people who would rather pick up their car.

Katrina Beckham calls it “an introvert’s car-buying dream.” The vending machine wasn’t available when she bought her vehicle, but she said delivery to her home went smoothly. The best part is they didn’t have to deal with a human being until they dropped the vehicle off, she said.

“I’m used to a dealership where you go in, and they tell you one thing, but it’s not exactly what you’re getting,” she said.

The Carvana website shows detailed pictures of cars for sale, price comparisons and a 24/7 live chat. The live chat and customer service is what Jerry Beckham said made the process much quicker.

“I ask a lot of questions,” Jerry Beckham said. “I hate going to a dealership and sitting around waiting for four,five hours just to haggle.”

The couple bought a Chrysler Town and Country 2014 minivan at $3,000 less than the price the car dealership negotiated, they said.

The customer experience is what makes the business unique, Garcia said. Twenty percent of Carvana customers go through the entire process – from picking a car to selecting a delivery date and signing a contract – in 20 minutes or less, he said.

“It’s no secret,” he said. “There are a lot of car dealerships out there that run great businesses and do a good job. There’s also no secret that there’s a lot of customers that are less than thrilled with their car-buying experience.”

The Top 5 car-buyer frustrations include the amount of time to complete a purchase, negotiating a price, getting a good trade-in offer, dealing with salespeople and understanding financing options, according to a 2014 study from Cox Automotive.

Garcia got the idea for Carvana when he asked himself why buying a car had to be so tasking. When there was no satisfying answer, he decided to tackle the problem himself.

“The fact that there are 35,000 car dealerships doing things the same way, it just meant that dealers resorted to finding more and more creative ways to peel money out of customers’ pockets,” he said.

Garcia, 33, said it’s a fun problem to tackle, but a complicated one. His company has to still make money and give the car buyers a good experience. This means using modern tools, including the Internet.

By putting the car-buying process online instead of selling vehicles at a traditional dealership, Carvana has reduced the cost of selling cars, he said.

“We make the same amount of money the dealers do, but we just reduce our cost structure, which means customers pay a lot less,” Garcia said. This process saves the customer on average $1,600 per car, he said.

Garcia said he knew he had a great solution to a problem. But when he first started the company, convincing everyone around him – consumers and his own employees included – wasn’t always easy.

“You know in your soul you’re building something that matters, but you can also see that all the signals aren’t clear to everyone around you, and you have to keep everyone on board and excited,” he said. “That’s a really trying time.”

Two and a half years ago, Carvana had 200 cars in its inventory. Today, it has about 1,700. Garcia said he expects the company to grow at an accelerated rate in the years to come.