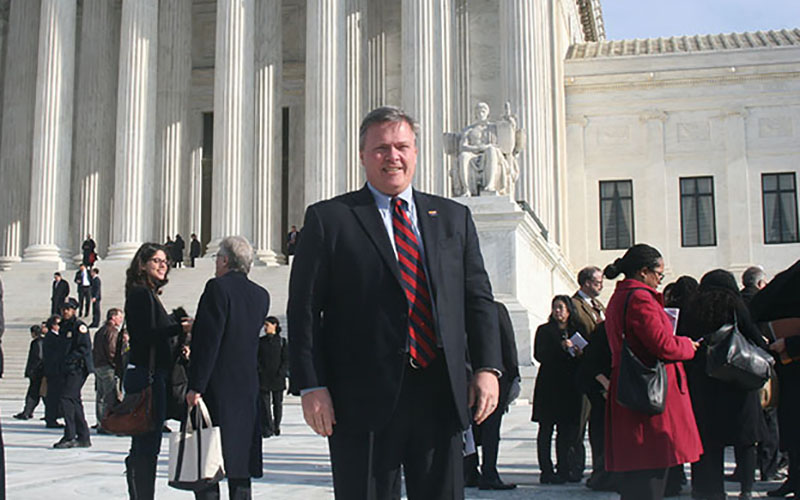 Scott Freeman, a Republican member of the Arizona Independent Redistricting Commission, walks out of the Supreme Court after a hearing that said the commission drew legislative districts that violated the “one-person, one-vote” principle. (Photo by Tom Blanton/Cronkite News)

The hearing on Arizona’s legislative districts was the second challenge the Supreme Court heard this year. The justices this summer upheld Arizona voters’ creation of an independent commission to create legislative and congressional districts. (Photo by Stephanie Snyder/Cronkite News)

WASHINGTON – A lawyer for a group of Arizona voters told the Supreme Court Tuesday that the state’s redistricting commission violated the one-person, one-vote principle by packing some legislative districts with Republicans to give Democrats an edge elsewhere.

But attorneys for the Arizona Independent Redistricting Commission defended the districts, calling them the best design that still met provisions of the federal Voting Rights Act, which required protection of minority voters.

The commission “would’ve had to draw tentacles of the kind that the court has many times criticized” to avoid over-populating some districts and under-populating others, said Paul Smith, a lawyer for the redistricting commission.

“This is a case where you wonder, what’s the beef? What exactly are we here for?” Smith asked the justices. “Even if the sole motive was partisanship, it would not make” the commission’s actions unconstitutional.

But Arizona Attorney General Mark Brnovich, arguing in support of the voter group that brought the suit, said the “intentional and systematic” manipulation of districts violates the one-person, one-vote principle under the Constitution’s Equal Protection Clause.

That principle says a state’s legislative districts must have nearly equal populations. But courts have typically held that differences of less than 10 percent are constitutional unless they are found to be the result of discrimination or other invalid reasons.

Justices challenged both sides in Harris v. Arizona Independent Redistricting Commission, a case that has the potential to affect legislative districts in a number of states depending on how the high court ultimately rules.

Justice Stephen Breyer said a “maximum population deviation under 10 percent falls within this category of minor deviations,” which are insufficient to prove discrimination.

The biggest population difference among Arizona’s redrawn districts is 8.8 percent, while the average is 2.2 percent.

Nonetheless, Mark Hearne, a lawyer for the voter group, said the commission discriminated against Arizona’s Republican voters by packing them into overpopulated districts, thus diluting their voting power in relation to Democrats in underpopulated districts.

But Justice Ruth Bader Ginsburg said the redistricting “gave Republicans more than their share” of representatives in the state legislature, so any “attempt to stack this in favor of Democrats” certainly failed.

Arizona voters amended the state’s constitution in 2000 to take redistricting authority away from the Legislature and put it in the hands of a five-member independent commission.

The commission is made up of two Republicans, two Democrats, and one other member who is unaffiliated with either party. Scott Freeman, one of the Republicans on the commission, attended the hearing but did not speak.

The commission is charged with redrawing congressional and legislative district boundaries every 10 years, after the decennial Census, to reflect shifts in population.

The plaintiffs in the Harris suit claimed that the latest district plan, finalized in 2012, “diluted or inflated the votes of almost 2 million Arizona citizens when the commission intentionally and systematically overpopulated 16 Republican districts while underpopulating 11 Democrat districts.”

A three-judge panel for the U.S. District Court for the District of Arizona ruled in 2014 that the commission had partisan motives when it last redrew the state’s districts, but that its primary motive was to win Justice Department approval under the Voting Rights Act.

Of the 30 legislative districts in the state, 18 have more voters than the average and 12 have fewer, with those smaller districts expected to have heavier concentrations of minority voters who are believed more likely to vote Democrat.

“That doesn’t show a bad motive on their (the commission’s) part, does it?” Justice Antonin Scalia asked.

It is unclear when the court might rule in the case. But Brnovich said after Tuesday’s hearing that he thought arguments supporting the voter group “went very, very well.”