Lama Tsewang Trinley sets up a video call at the Tergar Meditation Center in Phoenix so the faithful can connect with their Tibetan Buddhist teacher in India. (Photo by Fan Wang/Cronkite News) 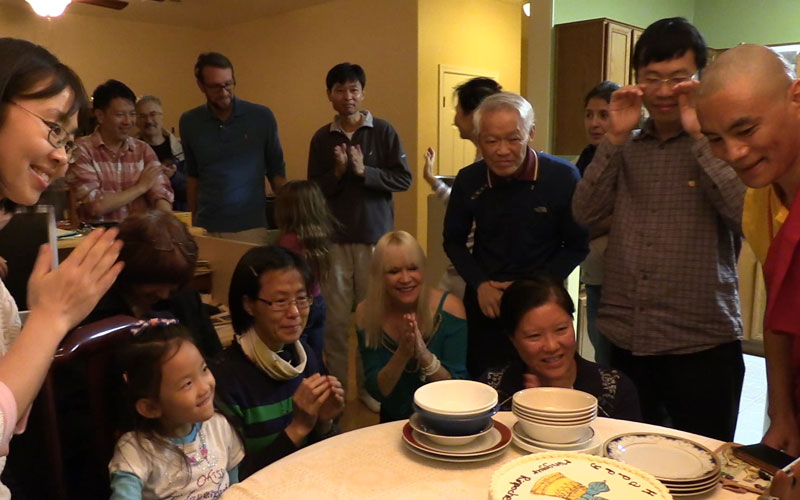 People at the Tergar Meditation Center in Phoenix greet their spiritual teacher Yongey Mingyur Rinpoche in India on a video call after he returned from a four-year retreat. (Photo by Fan Wang/Cronkite News) 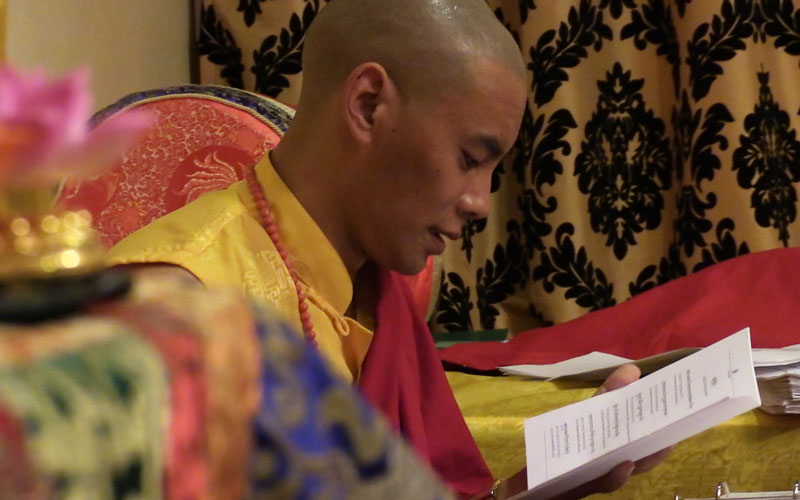 “I’m so happy, because, you know, we’re always waiting for him to return,” says Lama Tsewang Trinley. He is one of two Tergar resident teachers sent to the U.S. by the spiritual leader.

Born in Nepal and educated in India, Mingyur Rinpoche holds the Kagyu and Nyingma lineages of Tibetan Buddhism, and also oversees the Tergar Meditation Community, a global network of 55 Buddhist meditation centers.

He just returned from a four-year retreat in the Himalayan mountains and is back in India, home to the majority of Tibetans in exile.

As soon as he heard of the news from other Tergar monks on WeChat, Lama Trinley organized a celebration at the center in Phoenix. Those who attended did not know they would get to talk to Mingyur Rinpoche until they saw him on the video call.

“It was great. I mean, I think it was almost a little surreal,” says Justin Walker, who got into Buddhism in his teenage years and has personally known Mingyur Rinpoche since 2000.
People put their hands together, and said “Tashi Delek”, a Tibetan greeting. Some tried to hold back their tears.

“The feeling was hard to explain, it just flowed out naturally,” said Mary Guo, who’s been coming to the center since 2007.

While Mingyur Rinpoche was away in retreat, the center had a hard time because not as many attended events or group meditations.

“But Lama helped answer our questions regarding dharma practice. And if we have problems in life, we would go to him for help as well,” Guo says.

Originally from Tibet, Lama Trinley knew little English when he first landed in the Arizona desert in 2007. But now he leads meditations and chants at the center.

Lama Trinley has been in the United States for eight years and is now a U.S. citizen.
He remains devoted to his homeland. “No matter what citizenship is, I’m always Tibetan,” he says.

Lama Trinley will take a trip to India this month to meet with Mingyur Rinpoche and he will invite him to come visit the center in Arizona.