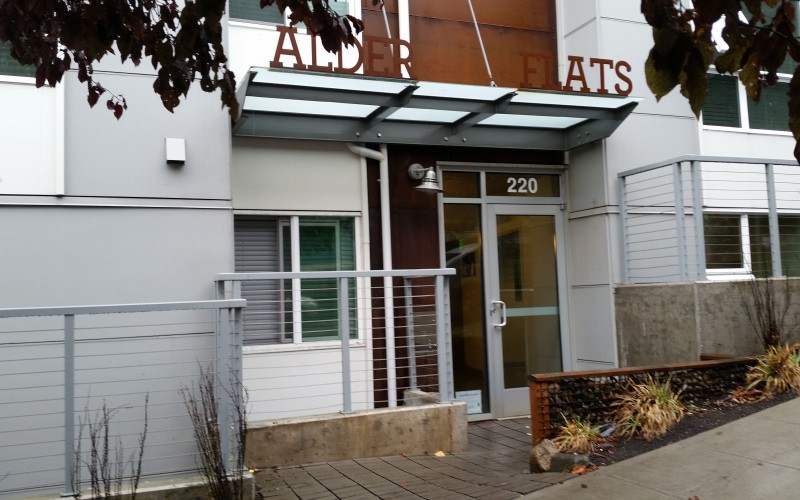 The front of micro-unit complex Alder Flats in Seattle, with six floors of micro-units. (Photo by Sarah Anderson/Cronkite News) 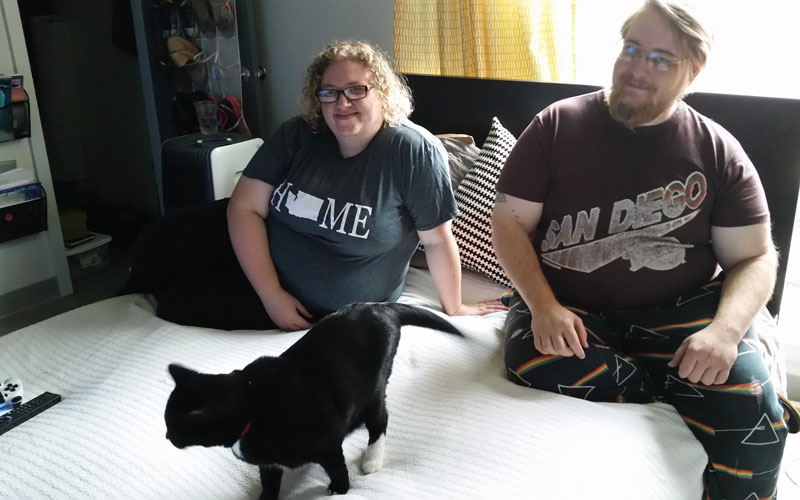 Beatrice Ansley and Matthew Rolston sit on a bed with their cat, in their micro-unit at Alder Flats. (Photo by Sarah Anderson/Cronkite News)

Cathy Reines, founder and owner of kōz Development in Washington, said Arizona is being considered as an expansion opportunity for micro-housing, not just by her company but by other developers as well.

What makes a micro-unit is not set in stone, but it’s loosely defined as a small studio apartment less than 350 square feet, with a kitchen and bathroom.

Kōz Development is interested in expanding micro-housing throughout the country, looking for densely populated areas that have a high millennial demographic. The company also looks for downtown areas with nearby universities for micro-units, as Reines said she’s found that there’s not enough market-rate affordable housing for students.

Reines sees this affordability as the big draw of micro-units, noting that cheaper and more basic units are snatched up quicker on the market than more expensive options with luxuries such as lofts.

For micro-unit tenant Beatrice Ansley at Alder Flats in Seattle, the big appeal is the chance to live simply. She shares a micro-unit about 200 square feet large with her husband, Matthew Rolston, and their cat. The room contains a small kitchenette, a wide screen TV, a double bed, a computer desk for Ansley to work from and a bookshelf with their DVD collection.

“It is really small, but we knew what we were getting into before we moved to Seattle,” Ansley said.

And the small size isn’t enough to deter Ansley from thinking of staying in a micro-unit indefinitely.

“I could stay here for years,” she said.

Deirdre Pfeiffer, assistant professor in Arizona State University’s School of Geographical Sciences and Urban Planning, said much of the construction in Phoenix is on the higher end of the housing market, rather than affordable housing such as micro-units. That means there could be an untapped market for micro-units.

But there could still be obstacles to it coming here, such as building codes or people’s fears that the added population density may lower their quality of life, she said. The concept would probably work best in cities such as Phoenix, Flagstaff or Tucson, she added.

“There’s a lot of diversity within Arizona, diversity of places… and diversity of culture,” she said. “I think it’s more possible to come to some places… than others.”