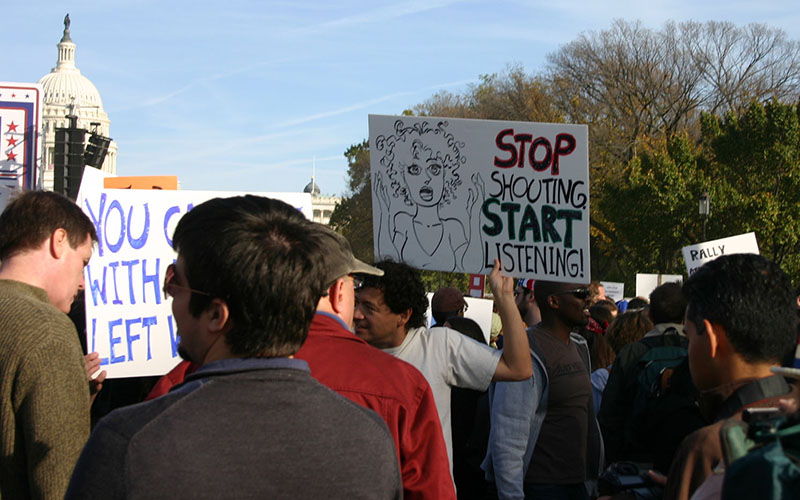 A sign at the 2010 Rally to Restore Sanity and/or Fear in Washingon sums up feelings of critics of congressional partisanship. But experts say while voters claim to like compromise, they reward partisanship with their votes. (Photo by Jason Pier/flickr via Creative Commons)

Partisan crowds rallied outside the Supreme Court in June 2012 as the justices were about to hand down their first decision upholding the Patient Protection and Affordable Care Act, batter known as Obamacare. (Photo by Samantha Bare/Cronkite News)

WASHINGTON – Arizona’s congressional delegation may not be as polarized in its votes as headlines would make it appear.

Cronkite News compiled voting scorecards for this Congress from six interest groups across the political spectrum and looked to see how far apart House members from different states’ delegations were.

Arizona – with four members of the conservative Freedom Caucus and two left-wing stalwarts in its nine-member House delegation – was less polarized than 22 of 33 states with at least one member from each party.

The analysis used the average difference between Democrats’ and Republicans’ scores in those states on six scorecards – Americans for Prosperity, Freedom Works, Heritage Action for America, Humane Society, Planned Parenthood and the Council for a Livable World. A higher average meant a more divided delegation.

Maryland, with a difference of 81.2, was highest and Nebraska’s 42.3 was lowest of the states studied. Arizona got a score differential of 63.0.

While Arizona did relatively well, “relative” is the key word. Experts said that while the media tends to focus too much on tales of partisanship, the numbers still make the case that Congress is a house divided.

Kyle Kondik, managing editor of Sabato’s Crystal Ball at the University of Virginia’s Center for Politics, said Arizona’s results are likely a result of having a number of competitive congressional districts.

Kondik’s center said there are only 12 states with “toss-up” races in 2016, and Arizona is one of just three with multiple toss-up races predicted next year.

Gonzales’ office does not list Sinema’s district as one of the competitive 2016 races, but he said the “lack of polarization (in Arizona) is driven in part by Sinema and Kirkpatrick.”

“There are several seats in Arizona that are very open. When you’re in a closely contested decision … even if your ambition is just to stay in the office you have, you’ve got to hedge your partisanship a little bit,” Cornfield said.

But he said there are other factors in play, as well.

Ambition for higher office is generally a reason for an elected official to be more moderate, he said, citing Kirkpatrick’s run for Senate and noting that there could be others in the state. A third reason for being relatively moderate, he said, is prior experience with members of the other party.

Finally, Cornfield said, there are certain issues that are more likely to make members of both parties reach across the aisle. He cited immigration as one that “doesn’t line up as neatly” as others – there are some Republicans who support cheap labor and some Democrats who are suspicious of losing jobs to foreigners.

But those instances of working together on issues don’t garner the same media attention as controversy and polarization, experts said.

“It’s more fun and more interesting to write about the negative stuff that goes on,” said Jim Kolbe, a Republican who represented the Tucson area in Congress from 1985 to 2007.

Gonzales agreed that polarization is a “favorite narrative of the media.”

Kolbe said while delegations might appear to be split, “there is much more collaboration within the system.” He cited recent progress on an education bill, the debt ceiling and a transportation bill, and optimism about a potential budget deal.

But meaningful bipartisanship can still be a rarity, making legislation on issues that most of the American people support extremely difficult, said Marge Baker, executive vice president of People for the American Way.

“The American people aren’t polarized” on issues like campaign finance reform and background checks for potential gun owners, she said, but Congress has been unable to pass meaningful bipartisan legislation on those topics.

Other issues are unlikely to ever see common ground: Of the 388 representatives in 33 states that Cronkite News looked at, 357 got a score of either zero or 100 on the Planned Parenthood scorecard.

At least one expert believes today’s level of polarization is a somewhat modern phenomenon.

John Fortier, director of the Democracy Project at the Bipartisan Policy Center, said both parties used to have wings from which they elected House members, recalling conservative-leaning Alabama Democrats and more liberal Massachusetts Republicans. But if those people ran today, he said, they would be much less likely to be elected.

Gonzales said one of the main reasons polarization exists is voters. While voters may say they think polarization is a negative and compromise is the best solution, he said, lawmakers who compromise run the risk of a tough primary challenge.

Kondik said the current situation does not lend itself to productivity.

“Things will get done when one party has total control of the government,” he said, referencing control of the House, the Senate and the White House by a single party.

“The American political system has a way of adjusting and correcting itself,” he said.