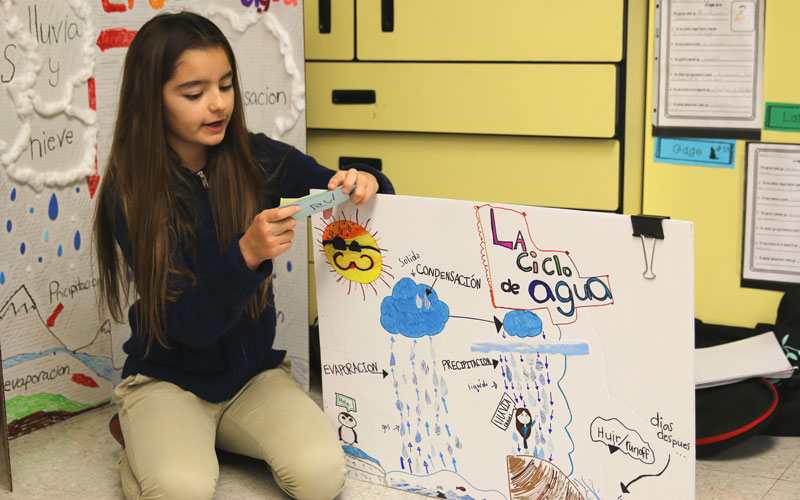 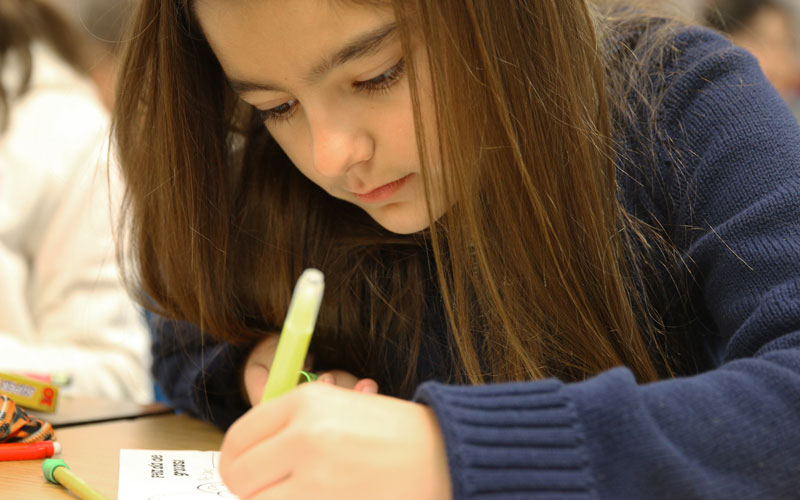 Because most of Remi’s homework is in Spanish, she turns to her Spanish-speaking grandmother for help when she needs it. (Photo by Alicia Clark/Cronkite News) 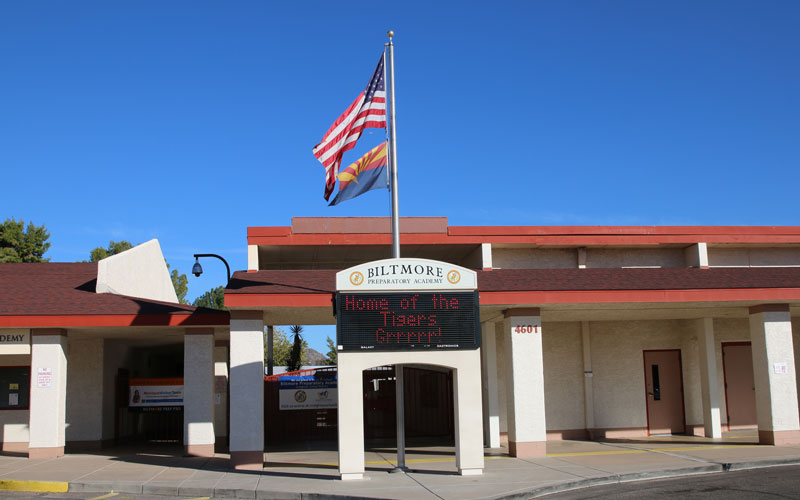 Biltmore Preparatory Academy is one of 21 schools in Maricopa with a language immersion program. (Photo by Alicia Clark/Cronkite News) 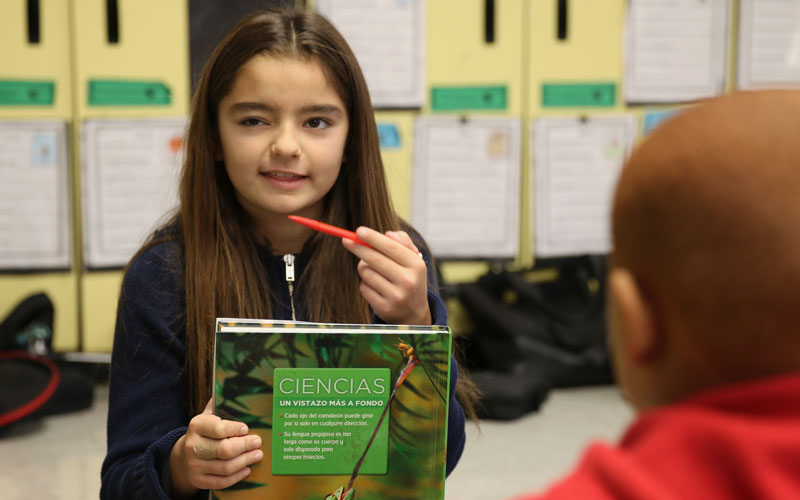 After her presentation on the water cycle, Remi’s classmates ask her questions in Spanish. (Photo by Alicia Clark/Cronkite News)

“They experienced a lot of prejudice and discrimination with being Spanish speaking so when they had children in the 70s and 80s that were school age, they decided not to teach that to us,” Wood said.

Now with a child of her own, Wood, who identifies as Latina, wants to ensure her daughter Remi learns Spanish.

Remi is a fourth-grader at Biltmore Preparatory Academy in Phoenix where she is enrolled in the Spanish-language immersion program.

“It’s kind of like a reintroduction to my daughter that she speaks Spanish now.”

There are 21 language immersion programs in Maricopa. Five of those programs are in Mandarin, the rest in Spanish.

Biltmore Preparatory Academy introduced a language immersion program in 2010 when the district was experimenting with ways to increase the school’s enrollment.

Parents were intrigued by Desert Willow Elementary School in the Cave Creek School District that has offered dual language education for the past twelve years.

“They (the parents) wanted to bring it on board so they approached the principal at the time and they talked to the district and they did their homework and it became a part of the program,” said Laurin. “It’s grown a lot since then.”

Of the 551 students at the school, about 75 percent of them are on the language immersion learning track, Laurin said.

Students in the immersion program spend half the day learning in English and the other half in Spanish.

“What everyone else is doing in English, they’re learning in Spanish,” said Diana Guillen, Remi’s fourth-grade teacher.

Guillen’s own son is on the language immersion track at Biltmore Prep.

“I always thought it was strange that they only expose kids to a foreign language in high school,” said Wood. “(High school) is so much later on in your development. You can’t absorb (a new language) as well as when you’re a young child.”

Experts say it is critical for children to begin learning a second language at a young age.

“Beginning foreign language instruction early sets the stage for students to develop advanced levels of proficiency in one or more languages,” said Martha Abbott, Director of Education for the American Council on the Teaching of Foreign Languages (ACTFL), in a 2007 online newsletter for parents of gifted youth from the Duke University Talent Identification Program.

Abbott noted those who start learning another language at a young age are better able to “develop near native-like pronunciation and intonation in a new language.”

Laurin said it makes sense for kids to learn another language, especially in a border state like Arizona, where according to the U.S. Census, 30.5% of the population is Hispanic and 26.8% of people speak a language other than English at home.

“It’s exposing (students) to different cultures and appreciating what other cultures have to offer,” Laurin said. “We’re in Arizona and we’re a heavily bilingual state anyway and it makes sense for people to be able to interact with each other.”

With an increasingly globalized society, the demand for bilingual employees is growing.

A 2010 survey of 419 employers and 511 employees found that 42 percent of employers expected the demand for workers proficient in Chinese would grow. Demand for Spanish speakers was expected to grow 72 percent, according to research from the University of Phoenix Institute and reported by the Wall Street Journal.

“I think just in terms of the job market, it opens up so many more opportunities if you are bilingual,” Wood said. “There is always a demand for bilingual employees in pretty much every field.”

Remi agrees with her mom.

“I want to be a singer but also maybe a cashier,” she said. “So I don’t want to not know what to say if someone comes in who always speaks Spanish.”

Remi has had even more opportunities to be fully immersed in the Spanish language.

She is participating in an exchange program with students her age from Hermosillo, Mexico.

Remi was paired with a student named Lorena. They spent a few days together doing group activities such as a visit to the Grand Canyon, touring the Pioneer Living History Museum and spending time in the classroom.

In March, Remi and 23 other students in her grade will travel to Hermosillo for a similar experience. To participate Remi had to take an exam, have references, do a presentation and write a paper in Spanish and English.

“I’m really excited to see my partner Lorena again because we have a lot of fun together and we’re both really silly,” Remi said.

Learning about the culture connect with the Spanish language and Remi’s Mexican heritage is something Wood has always wanted for her daughter.

“Carrying on the link to our culture through language is really important,” said Wood.

Biltmore Prep’s principal says parents have told him they are “pushing” for their children to reconnect with their roots through language.

“There’s a movement to preserve the culture and language is an important part of that,” said Laurin.

“It’s really significant for those families to have that opportunity.”

Remi’s grandmother often helps with her Spanish homework, Wood says her mother is “really excited” her granddaughter is learning Spanish.