The trail is away from traffic and provides a relaxing environment to take a walk or ride a bike. (Photo by Elenee Dao/Cronkite News) 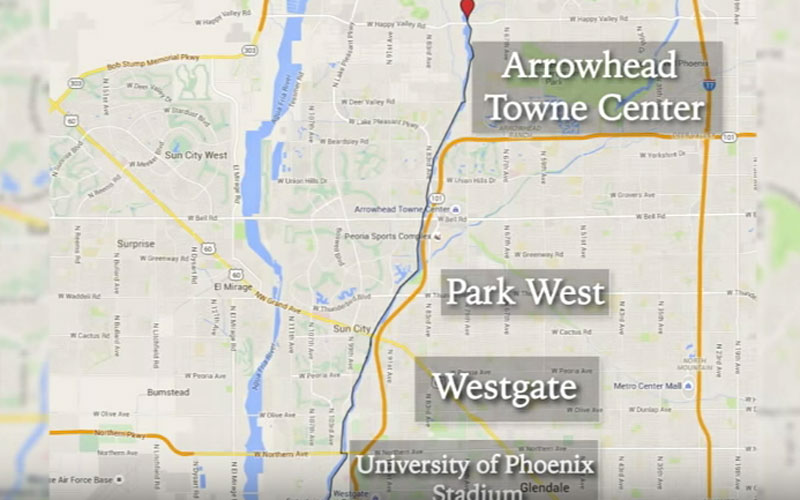 The path goes along the New River Trail bank on the west side of Arizona State Route 101. (Photo by Elenee Dao/Cronkite News)

“It’s an opportunity for me to exercise the dogs and see a little bit of nature,” said Glendale resident Jim Halterman, who walks his dog daily on the trail.

The trail system runs along the New River Trail bank and the south extension is west of the Loop 101 freeway. The trail is away from traffic, but it is close enough for bike riders to move between different shopping centers. It is a short distance from shopping centers such as Westgate and the University of Phoenix Stadium, Park West and Arrowhead Towne Center.

Bryan Wagner, the Glendale Park Manager, said the trail is safer for travelers.

“Safer for walkers, bikers, hikers,” he said. “You don’t have to go into traffic – everything is going underneath bridges.”

Halterman added: “An awfully nice experience, and I’d come out occasionally – take advantage of sitting on the benches and watching the birds.”

There are many different species of trees along the New River Trail.

“We have Texas ebony trees, a lot of bougainvilleas, sage bushes, natural wildlife. Anywhere from jackrabbits to javelina,” Wagner said.

The next step for the New River Trail system is connecting it to the Grand Canal Linear, to make it easier for the public to get to the Westgate Entertainment District without traffic. The connection between the two trails is only about a half mile apart.

Wagner said the goal is to complete one lone system.

“I’ve always thought it was a real positive thing for citizens to have some facilities like this,” Halterman says.

The construction to link the New River Trail system to the Grand Canal Linear will begin late this year into early 2016.