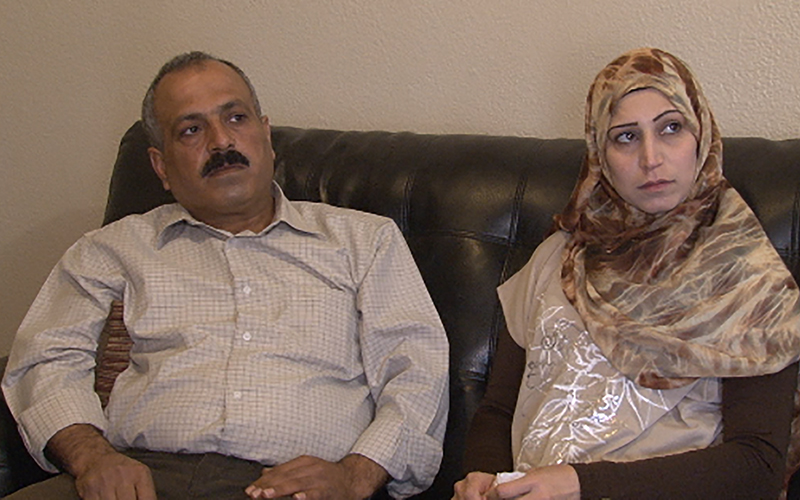 Abdulrafae Alsorani, left, and his wife, Rana Albitar have been in their new home in Phoenix two months, glad to be away from the horrors in Syria.
(Photo by Lauren Michaels/Cronkite News)

So Abdulrafae Alsorani and his family fled Syria leaving everything behind.

“It became very difficult to live there, difficult to get food and bread for the children,” he said, through a translator.

Alsorani, his wife Rana Albitar and their six children took refuge in Jordan before coming to the United States and Phoenix in search of peace and prosperity away from the horrors of war. They have been in the United States for just two months and have not learned English

Since the attacks on Paris, Syrian refugees have been under extra scrutiny. Several governors, including Gov. Doug Ducey, have called for a halt to resettling Syrian refugees in their states. As of Nov. 17, there are more than 4.2 million registered Syrian refugees, according to the UNHCR, the UN refugee agency.

The Alsorani family lived in Homs, a city in western Syrian. Alsorani said the, “people would go out to protest, and the government would retaliate with bullets.”

The protests were against the mayor and local government, they were peaceful, during the first days, and the people did not have guns, Alsorani said.

After some time, there was shelling from heavy artillery, and many people would die to be left in the streets, Alsorani said.

“You could not pick them up,” he said.

He and his wife, Rana Albitar, have five daughters and one young son aged 5 to 16. Eventually they had to leave their home and moved to a safer area in Homs where people loyal to al-Assad lived.

They were shocked when soldiers searched the family, including the children, and its home for weapons while armed government loyalists were left alone.

“When the army would come my kids would be frightened, and I would tell them to calm down, cool off, it’s going to be all right,” Alsorani said. “But it’s difficult because you see weapons, you see everything coming in through your house.”

The violence and war was a great stress on the children, Albitar said. There would be days when they weren’t able to eat, because of the stress. She hoped to give them toys so they could play and forget about the bad living conditions.

Eventually, Albitar would not let her children go to school or leave home because of the dangers.

After three months of constant searches, the family decided to leave Syria. First, they took a taxi from Homs to Damascus, and then another cab from there to a small village near Syria’s border with Jordan.

Once they were at the border, the Free Syrian Army, an opposition group that has defected from the Syrian regime, escorted them across the border into Jordan. The family came under fire during their journey, and were forced to wait on the ground until it had stopped.

The Alsorani family waited for more than a year in a Jordanian refugee camp. They first went to the United Nations to seek asylum, and when they were called they went through rigorous interviews with the United States’ Department of Homeland Security.

During the interviews they were asked every little detail about their lives by United States officers, before they were granted access to the United States.

Here in Phoenix, the children are finally able to play and go to school as the family settles into its new home.

Rania, their oldest daughter, is very happy to be in the United States. Here she can finally study hard in school and have a hopeful future.

The family received help from Arizona Muslim Community, a nonprofit, to help them resettle. Alsorani was an electrician when he was in Syria, and once he learns english he hopes to find work.

Alsorani wishes everyone could see the horrible conditions in the refugee camps before deciding they don’t want Syrians to resettle in the United States.

“I wish the American government and people would change their mind, and bring the Syrian people from Jordan, because they are really living in a tragedy, a misery,” he said.