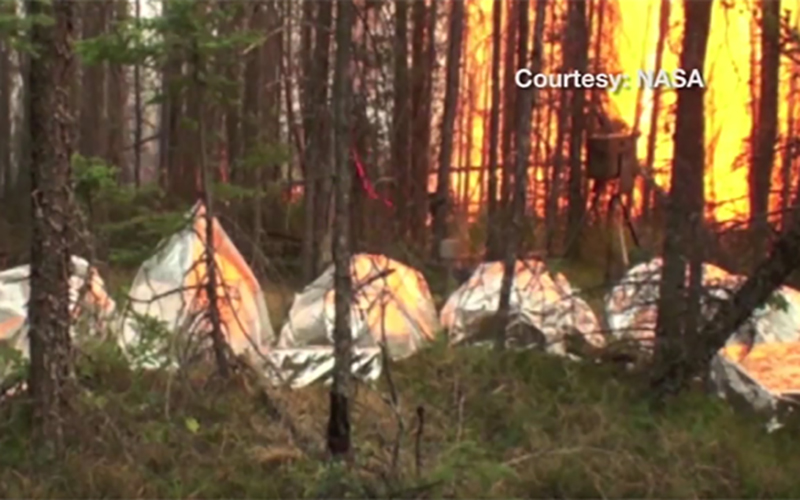 NASA researchers tested more than 200 material combinations before settling on the best for shelter prototypes, here tested in a Canadian forest fire in June. More tests are expected next summer. (Photo courtesy NASA) 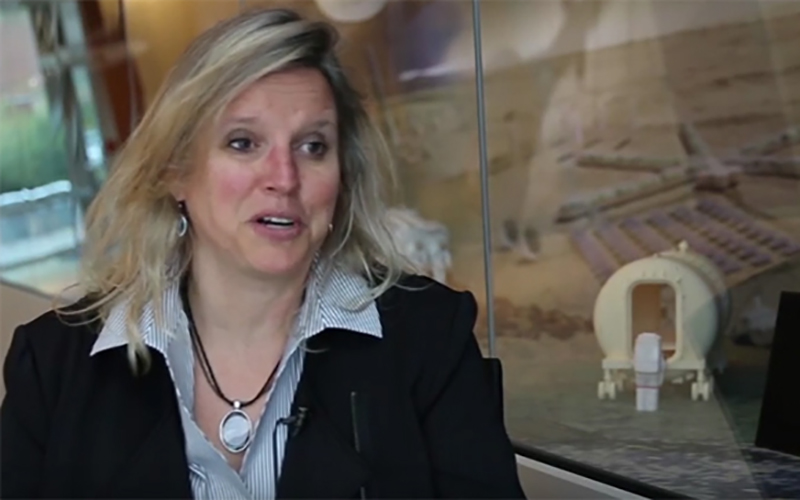 NASA’s Mary Beth Wusk said that watching technology developed for space being used to possibly save lives on Earth has been “probably the highlight of my career.” (Photo by Elizabeth Blackburn/Cronkite News) 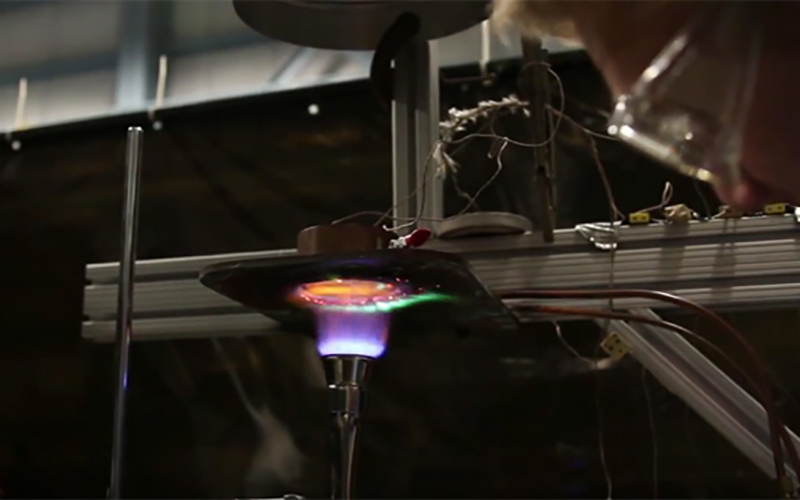 A researcher watches testing of a potential fire shelter material in the laboratory at NASA-Langley where a team hopes to apply space technology to more Earth-bound issues. (Photo by Elizabeth Blackburn/Cronkite News) 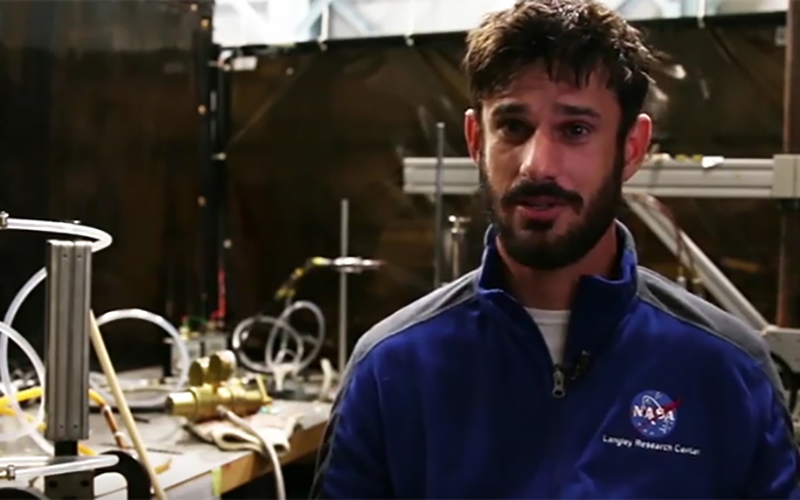 Josh Fody, a NASA thermal analyst, is helping develop a new portable shelter for firefighters. He said the intense heat during initial field tests of the shelter amazed him. (Photo by Elizabeth Blackburn/Cronkite News)

HAMPTON, Va. – It was a year after workers at the NASA Langley Research Center had developed an inflatable heat shield for spacecraft when Mary Beth Wusk heard about the deadly Yarnell Hill Fire that killed 19 firefighters in 2013.

She decided they had to do something.

“When we heard about what happened at Yarnell Hill with the fires and the loss of the firemen, we talked about it with the team,” said Wusk, an integration manager in the Game Changing Development Program Office at Langley.

“We said, ‘Hey is there any chance that our materials could be the difference in those entrapment shelters that they are working on? Is there anything we could do to improve the potential of survivability?” she said.

Those questions led to the creation of CHIEFS – Convective Heating Improvement for Emergency Fire Shelters – a team that is working to take its knowledge of heat-shield technology for space missions and use it to help improve fire shelter technology here on Earth.

Wusk said the fire shields being used today by firefighters were developed back in 2002 and “work extremely well if the fire is not directly on you.”

“So these shelters that we are working with are looking at trying to protect the firemen beneath the shelter if there is more of a direct flame on the shelter itself,” she said.

“We had launched in 2012 this inflatable heat shield that had this thermal protection system on it,” Wusk said. “We wanted to know what are the chances of our materials working to improve the potential of survivability for these firefighters?”

Josh Fody, a thermal analyst and project lead for CHIEFS, said the team tested more than 200 different combinations of materials to find the right ones to begin building prototype fire shelters for field testing.

The U.S. Forest Service conducted the first tests in June at Fort Providence in Canada’s Northwest Territories. Fody said the team built the prototype shelters in five months, “which is a real rapid turnaround for us,” for the chance to do “real environment, real fire environment testing.”

“We had a very successful test period there, just learning real-world lessons, you know, things we hadn’t thought of testing small things in a laboratory,”

Fody described the intensity of wildfire conditions they tested under in Canada, saying he could feel the heat coming off the stand of burning trees from 100 yards away.

“It is really impactful, it is powerful,” he said. “It makes you think, ‘My lord, what if I was stuck in that situation and all I had to rely on was this piece of gear that some people had developed to try and give me a shot at surviving this?'”

He said a second round of tests was held in September in a full-scale fire testing facility at the University of Alberta in Edmonton. They are using information from those tests to develop “Generation 2 fire shelters” for testing in the spring.

Fody said the challenges of building a shelter that meets firefighters’ needs are great.

“A perfect shelter would be a shelter that weighs no more than the current shelter weighs, is no bigger, has significantly improved protection, is durable, gives off no toxic gasses or anything that could be damaging to the occupant inside during the deployment itself,” Fody said.

“That’s a real challenge but I think we have a couple of designs that we have preliminarily tested and that we are continuing to improve now that are looking very promising,” he said.

Fody said the team hopes to have new prototypes in the field ready for testing by next summer, but that the schedule could change.

It’s a long way from the original use of NASA’s heat shields – inflating them to slow a spacecraft down and handle the intense heat as it enters the atmosphere of Earth or another planet – to the forests of Canada. But Wusk and Fody say making that trip has been a privilege.

Wusk said she has worked “on all types of projects here at NASA Langley and across the agency,” but seeing that technology “transition into something that can improve life here on Earth is a huge, it’s a very exciting thing for me and for the rest of the team”

“This opportunity to see the team work together and have a common goal that can make such a difference has just been probably the highlight of my career,” she said.