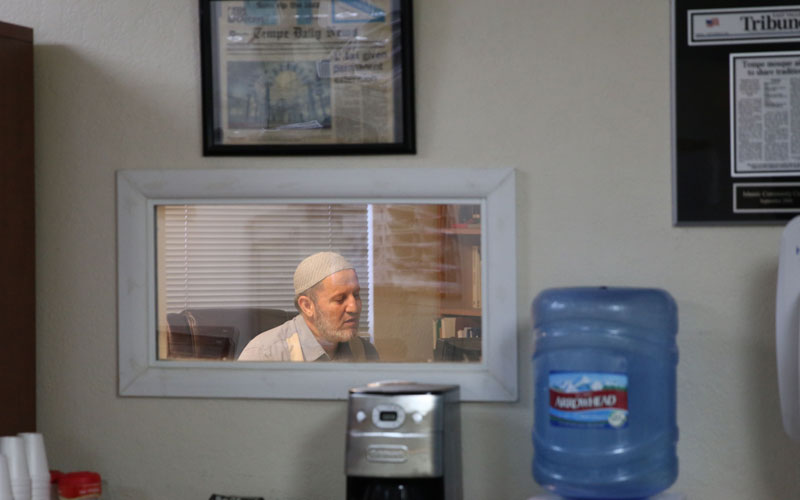 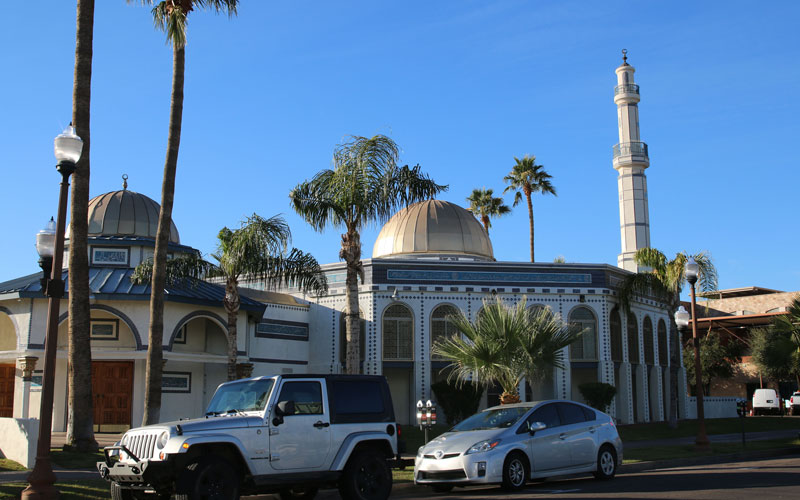 The Tempe mosque is just a few blocks away from the ASU campus. (Photo by Alicia Clark/Cronkite News)

The Qur’ân sits on a bookshelf inside the community center. (Photo by Alicia Clark/Cronkite News) 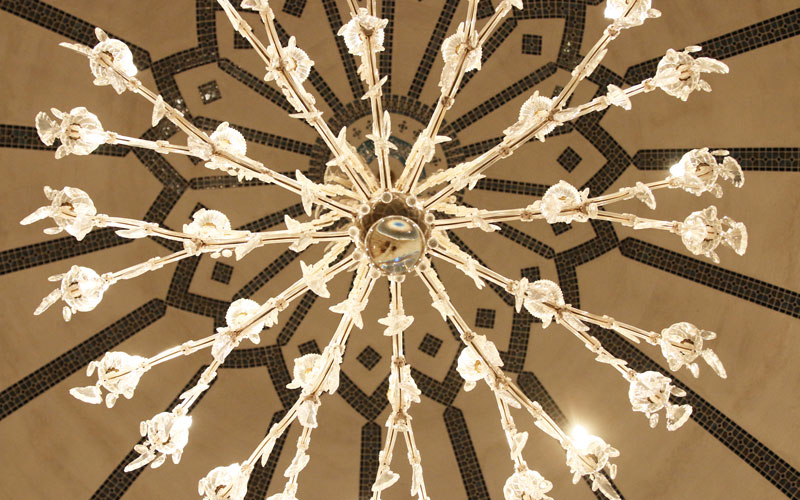 A chandelier hangs in the the center of the mosque’s prayer room. (Photo by Alicia Clark/Cronkite News) 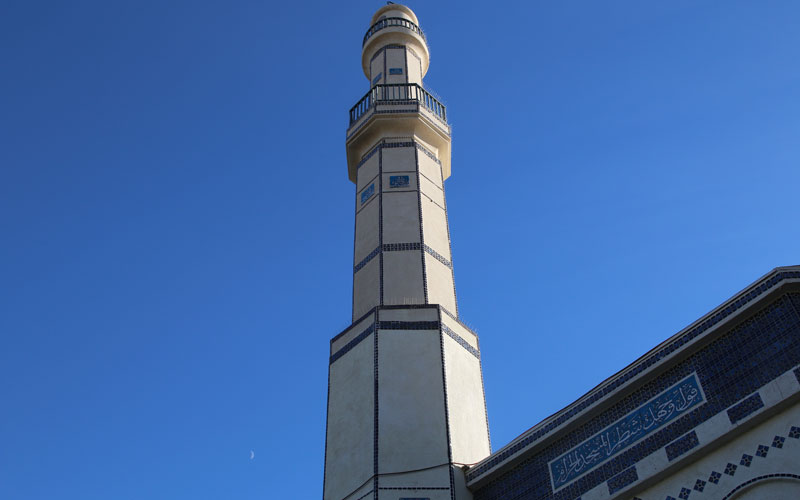 The mosque is just a few blocks away from the ASU campus. (Photo by Alicia Clark/Cronkite News)

Following the attacks, which left 129 dead and more than 350 injured, the Council on Islamic-American Relations (CAIR) said it has received word from individual Muslims and mosques of acts of discrimination throughout the United States.

CAIR has received reports of acts of arson, threatening messages, assault, and other forms of discrimination since Nov. 13.

Shqeirat said, unfortunately, this kind of discrimination is not entirely new.

“The Muslim community in America, our houses of worship, the mosques are facing threats of vandalization, attacks, since 9/11,” Shqeirat said. “Now with Paris, the issue is escalating.”

Shqeirat found his car scratched with words of profanity after ISIS claimed responsibility for the terror attacks.

“Their (ISIS’s) actions should not be used to discriminate against the 99.99 percent of good Muslims who are good humans, have good families, who are good citizens, who try to positively contribute to their society.”

In response to the attacks last Friday, more than half of the nation’s governors put out statements calling for a halt to moving refugees fleeing the Syrian Civil War into their states.

Arizona governor Doug Ducey released a statement Monday calling for “an immediate halt in the placement of any new refugees in Arizona.”

Shqeirat said refugees fleeing the terror of ISIS should not be punished for the actions of a small group of people claiming to represent Islam.

“Collective punishment we believe is not fair,” he said.

Posts on social media criticizing Muslims for failing to condemn the terrorism of ISIS and other anti-Islamic messages began appearing online soon after the attacks in Paris.

If there are peaceful Muslims that don’t agree with the radicals, why don’t they ever stand up against them?

And if there are any peaceful Muslims out there why don’t they speak up about these otrocities?

Why don’t peaceful Muslims speak up, help the victims of Muslim fanatics and fight the terrorists? Please explain that to me?

Global leaders on the Paris attacks

“These savage and despicable attacks on civilians, whether they occur in Paris, Beirut or any other city, are outrageous and without justification. We condemn these horrific crimes in the strongest terms possible. Our thoughts and prayers are with the loved ones of those killed and injured and with all of France. The perpetrators of these heinous attacks must be apprehended and brought to justice.”

— the Council on American-Islamic Relations said in a press release.

“We strongly condemn the terrorist attacks in Paris. No religious tradition can ever justify nor condone such ruthless and senseless acts of violence. Our prayers and condolences go out to the family and loved ones of the victims.”

— The Islamic Society of North America said in a press release. “The atrocious Paris attacks shows that scourge of terrorism can strike anywhere and any time.”

— King Abdullah of Jordan said at an event in Kosovo. “In light of the recent terrorist attacks in Paris, we would like to convey our deepest condolences to the people of France. Indonesia fervently condemns the violence and brutality that has occurred. Terrorism under any circumstances cannot be tolerated.”

— President Joko ‘Jikowi’ Widodo of Indonesia said at a press conference in Jakarta.

“Whenever an unfortunate thing happens, Muslim leaders and Islamic organizations speak out against the evil,” said Shqeirat.

In the wake of the terrorist attacks in Paris, some Muslims took to social media to defend their religion and speak out against ISIS using the hashtags #NotInMyName and #TerrorismHasNoReligion.

Islam has taught me to show peace and goodwill to all. Terrorism has no religion. Thoughts are with those affected in Paris #notinmyname

For every terror attack claimed in the name of Islam: #notinmyname . Monsters do not represent my faith.

#NotInMyName has been used in the past in response to acts of terrorism by ISIS.
Before the terrorist acts in Paris, Arizona Muslims experienced several high profile discriminatory acts.

In April, a man who calls himself “Brother Dean” who can often be found on ASU campus protesting against students of all races and religions, protested outside of the Islamic Community Center of Tempe mosque and desecrated a copy of the Quran.

In May, a group of up to 250 people demonstrated in front of a mosque in Phoenix. Many carried weapons.

Ahmad Al-Akoum from the Islamic Community Center of Tempe points out that just as ISIS makes up a tiny proportion of the Islamic population in the world, the group projecting hate against Muslims is also small.

“The day after the Paris attacks a lady came here to the center and she said ‘I feel so bad because of all the things I hear about you guys in the media,'” Al-Akoum said.

“I mean this lady worked for maybe six or seven hours and she said ‘I’d like to share this with you guys,’ ” Al-Akoum said.

Imam Shqeirat said his door at the Tempe Islamic Community Center is open to those who have questions or want to learn more about Islam. He hopes education will help build understanding and prevent future discrimination or personal attacks against Muslim Americans.

And while Al-Akoum hears about instances of discrimination from Muslims in Arizona, he said most people are supportive.

“I believe in our community here in Arizona,” he said.