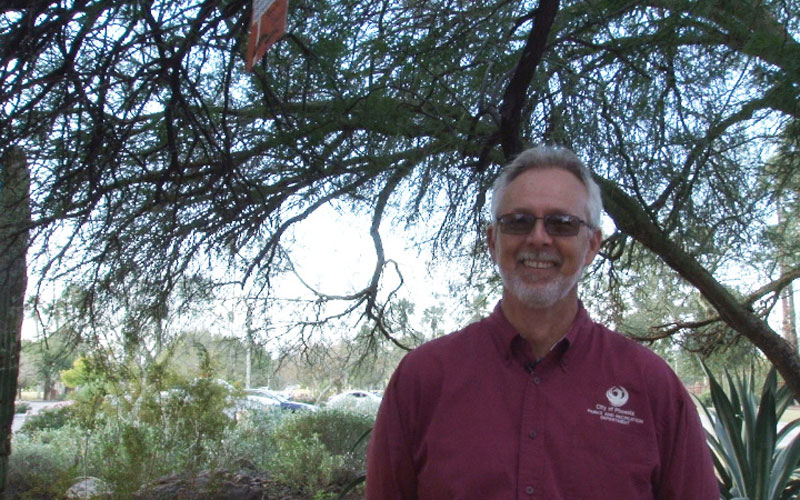 Phoenix Forestry supervisor Richard Adkins has been tagging trees in Encanto Park to educate the community of the value trees bring to the community. (Photo by Eboni Johnson/Cronkite News)

The orange price tags hang on trees in Encanto Park in Phoenix. The tags show the estimated value of the tree. (Photo by Eboni Johnson/Cronkite News)

Leaves aren’t the only things blowing in the wind. Some trees may have price tags hanging from their branches.

“Basically, it’s an informational campaign. Trees are all surrounding us and a lot of people take them for granted. Trees have many values in our community,” said Richard Adkins, Forestry supervisor with the city of Phoenix.

Encanto Park in Phoenix has three different species of trees with price tags, each handwritten and hung by Adkins to show the tree’s annual value to the community. He said the point is to show residents that there’s more to these trees than just shade.

“This one is hanging on a mesquite,” said Adkins, pointing to the 1-by-2-foot orange tag. “It has a total annual value of just over $200 a year that it provides to the citizens of Phoenix. That’s a combined dollar value of stormwater runoff reduction, air quality, carbon sequestration, electricity savings and then just general aesthetic value to the park. So we have that all broken down by the dollar it contributes.”

Valley resident Damian Mitchell says he notices the difference between the environments as he rides his bike from Scottsdale to West Phoenix.

“I can go through Scottsdale and Gilbert, where there are a lot more apple and orange trees,” said Mitchell. “Which to me means a lot riding my bike, because I like to stop sometimes and enjoy myself and grab a fruit from the tree. I can’t do that as I head west.”

The tags do not last any longer than a few weeks and Adkins is OK with that, as long as the point is made.

“It is a short-term tag, but with long-term results,” said Adkins.

Mitchell hopes this campaign will continue to grow, as well.

“I think that you guys are doing great,” he said of Phoenix “I enjoy this park. I hope that the West side of town gets planted more as I ride my bike. I hope that this program spreads out.”

With more than 90,000 public trees in Phoenix, there is no way for Adkins to tag them all, but that’s not his main priority. Adkins wants residents to not only learn the importance of trees, but to know where they should be properly planted.

“Trees are fantastic!” Adkins said, “And as we’re living in it and building up our urban community we need to remember that and put in trees as part of our development infrastructure so that we can have a healthier and more sustainable existence here.”

The city of Phoenix has teamed up the Project Desert Canopy to help grow a healthier community. With this campaign, the city is dedicated to increasing its tree coverage from about 12% to 25% by the year 2030.

For information on the Project Desert Canopy visit
Azsf.az.gov.