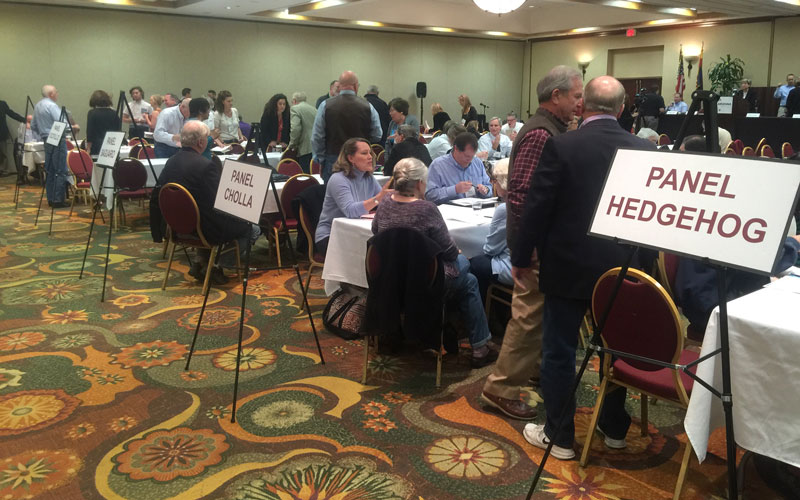 Panel members at the 107th Arizona Town Hall met for three days to develop recommendations for the state to manage its water needs as the current drought continues. (Photo by Jesse Millard/Cronkite News)

Ranchers, developers, environmentalists, and community members from across the state have been meeting at the 107th Arizona Town Hall to develop recommendations on how to prepare for Arizona’s water future.

The group said on Wednesday that Arizona should create a “culture of conservation” through water education classes in public schools and public forums geared toward educating everyone on water’s importance.

In addition, it recommended amplifying the state’s existing water supply by adding more water infrastructure, increasing the use of reclaimed water and gray water, as well as improving Arizona’s abilities to capture and utilize stormwater.

“We’ve been working since Sunday, on a variety of discussions that bring people together from all different parts of the state to talk about the importance of water and how we can plan for our water not just in the present, but into the future,” said Linda Elliott-Nelson, board chair of Arizona Town Hall.

She added, “(With the drought) we have more of a strict issue than we did 15 years ago.”

In the past, Arizona has managed its water supply for metropolitan areas with investment in large reservoirs and waterways to bring in more water and conserve it, according to the Arizona Department of Water Resources. But some rural areas have suffered from the drought, due to a lack of water infrastructure.

This was Arizona Town Hall’s sixth water related forum since its inception, and there was much debate on climate change, water allocation and water education.

Educating the public and elected officials about the complexities of water issues in the state has been a common theme throughout the town hall because it is not an easy fix, Elliott-Nelson said.

“We have a wealth of experts and knowledge that we can draw from, saying this is how we are doing things, but this is how we go forward into the future, especially with long term planning when it comes to water,” she said.

Andy Groseta, a third generation rancher from Cottonwood, was at the town hall, and thought it was important to talk about water’s future after years of growth and increased water demand in the state.

Arizona has done a good job of managing water in the past, but, “my concern is with how good of a job we do going forward,” Groseta said.

Groseta agreed Arizona needs to increase water storage capacity and further utilize the water it already has by increasing water infrastructure. But he also thinks Arizona needs to look into water desalination, which can be expensive, and thinning its national forests.

“If we start harvesting our trees in a good way, that will increase water runoff (yield) and quality,” he said.

Cheryl Lombard, president and CEO of Valley Partnership, an advocacy group for responsible development, believes the cities need to play a bigger role for water conservation.

Cities already have done great work with water in the past with conservation efforts she said, but more can be done.

“We need to look at other tools like waste water plants, and these inner city types of tools so that we’re really not wasting water,” she said.

Arizona Town Hall was founded in 1962, and holds meetings to discuss critical topics for the state in hopes of resolving issues. Members of the nonprofit gather for the town halls and break out into panels where each member discusses the issues. At the end of the town hall each panel gathers and revises a report. Every decade Arizona Town Hall discusses water issues. This year, Arizona Town Hall recommended six water priorities for Arizona to pursue: