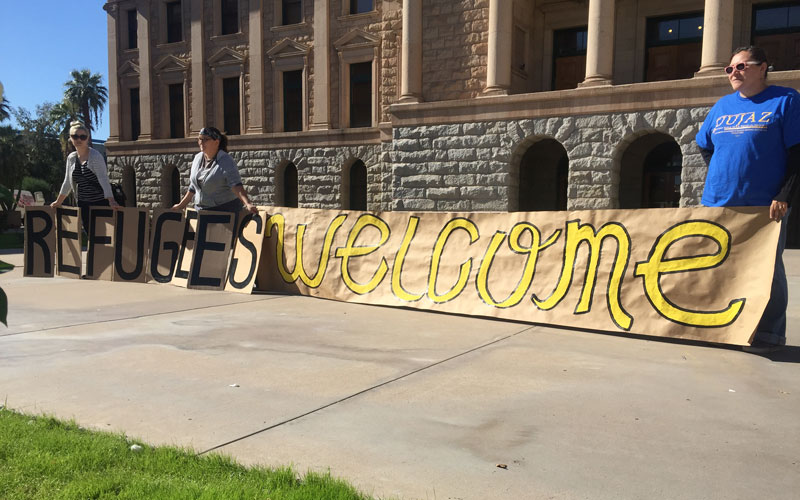 Demonstrators held signs welcoming refugees at a protest where they called on Gov. Ducey to reverse his decision keep Arizona from accepting refugees. (Photo by Alexa D’Angelo/Cronkite News)

“Ducey, we reject your racism,” the crowd chanted while holding signs that read “welcome refugees.”

The Republican governor, in a statement Monday, invoked the state’s right “to receive immediate consultation by federal authorities per the United States Refugee Act, and that the federal government take into account the concerns and recommendations of the state of Arizona as they are required to under federal law, in our efforts to keep our homeland safe.”

“I’m appalled and disgusted that Gov. Ducey has joined the other governors to spew hate and breed violence, racism and hysteria against refugees that have withstood the bombardment of violence and war,” said Francisca Porchas, organization director at the Puente Human Rights Movement.

Other organizations joined the protest.

“I could not stand idly by after our governor made a racist and xenophobic statement politicizing a tragedy,” said Rev. Reginald Walton of Phillips Memorial CME Church of Phoenix.

“Doesn’t it say on the Statue of Liberty: ‘Give me your tired, give me your poor’? And then for these governors to turn around and make a statement like this to say no refugees are welcome without so much as an explanation is xenophobic.”

Arizona has accepted 112 refugees from Syria this year, and a total 3,616 since 1981 according to the Arizona Refugee Resettlement Program.

“We are calling on Gov. Ducey to think about this statement,” said Kristy Sabbah, from the council on American Islamic relations. “The Syrian refugees are looking for the great melting pot that is America founded by people who fled terror, people who were seeking a better way of life.”

The federal government decides which refugees can enter the country and funds the resettlement program.

Ducey wants Congress and President Barack Obama to amend federal law to give states greater oversight and authority over the placement of refugees.

“These acts serve as a reminder that the world remains at war with radical Islamic terrorists,” a statement from Ducey read. “Our national leaders must react with the urgency and leadership that every American expects to protect our citizens.”

Violence and civil war have forced one in 10 Syrians to leave their country during the past two years, according to the Pew Research Center. Half are under 18 years old.

“They’re children. They are women. You see images of babies floating up onto the beaches and those are the people that are fleeing,” Sabbah said.

Syrian refugees were not present at Tuesday’s demonstration but Abu Amer, who arrived in Phoenix a few weeks ago said the statements made by Ducey are “absolutely unfair.”

“I came here for the safety and freedoms granted to the people in this country,” said Amer. “This represents a false display of who we are as true Muslims.”

After fleeing Syria, he spent the past five years in Jordan waiting to come to the U.S. His relatives remain in Syria where they cope with violence, struggle to find clean water, enough food and electricity is unreliable. A few days ago Amer learned his young nephew had been killed.

“Before the conflict, Syria was a land of prosperity and resources,” Amer said. “I used to own a large farm that employed 85 workers and we lived in peace. While here I am in America washing dishes in a hotel trying to make a living for my children.”

“While I do appreciate the opportunity, I miss what once was,” he said. Amer says he and other Syrian refugees would gladly return to their homeland but cannot because of civil war.

“The Republican leadership of the State Senate strongly supports this approach to deal with this developing crisis, in an effort to keep all the residents of Arizona safe from the kind of despicable violence perpetrated by radical Islamists as we have seen here in the United States and most recently in Paris,” said Arizona’s Senate majority in a statement released Tuesday.

President Barack Obama has called on the U.S. to accept 10,000 Syrian refugees in the current fiscal year, which began Oct. 1. About 400 refugees were expected to be resettled in Arizona.

The U.S. State Department said Tuesday that it would not change its plan to accept 10,000 Syrian refugees in the next year.

Ducey was among a group of governors scheduled to be on a conference call with the Obama Administration about the refugee resettlement issue Tuesday afternoon.

As opposition builds, refugee advocates urge Arizona’s governor to reconsider his position. Us UNITED, a humanitarian organization at Arizona State University, sent a letter to Ducey.

“It is inhumane and unethical to condemn a population suffering from a civil conflict when entering our borders for which we can provide them with the opportunity for a new beginning,” wrote Abdul Manfoukh, president of Us UNITED.

Ducey did not meet with the demonstrators at the Capitol but they hope he hears their message.

“It’s just deplorable and breeding racism,” Porchas said. “We are here to tell Gov. Ducey to take back his statement and that he’s not representing us.”