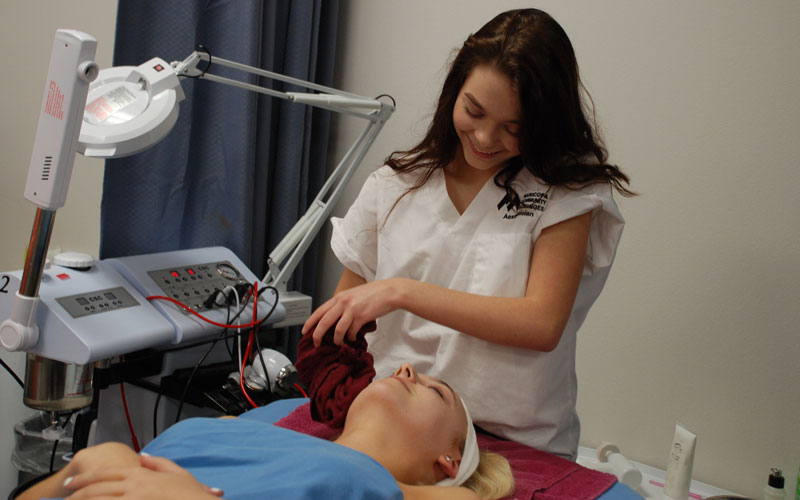 A student in West-MEC’s Aesthetician program practices on another person.
(Photo courtesy of West-MEC) 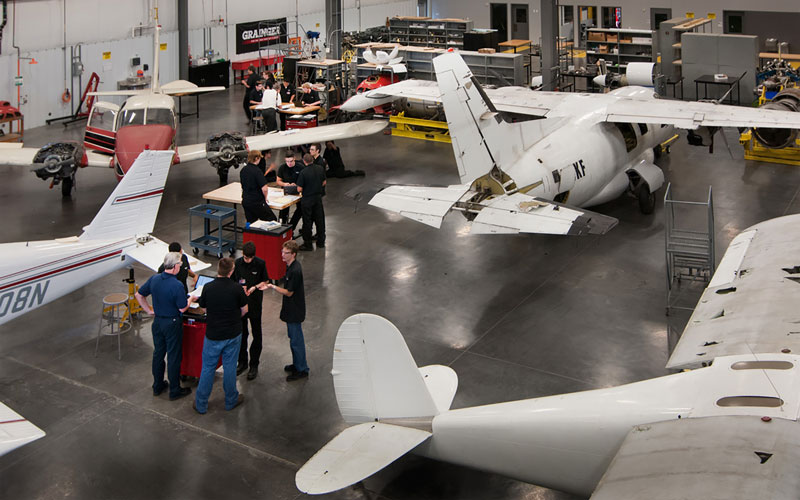 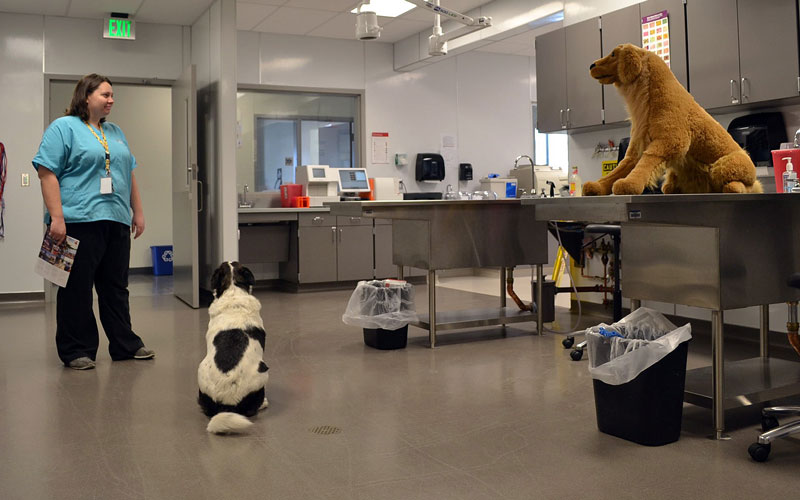 The school’s set-up is probably better than what any clinic will offer her students in their future careers, she says.

“I don’t know off the top of my head – but it’s in the millions, easily,” she said of the equipment’s cost.

For Adams’ pupils and the 25,000-some students who attend Joint Technical Education Districts in Arizona, career and technical education programs like West-MEC’s can be the path to a job.

But JTED educators across the state warn that these programs could go away in the next few years because of diminished state funding. One administrator calls the most recent budget cut by the State Legislature “non-survivable.”

West-MEC, or the Western Maricopa Education Center, is one of Arizona’s 14 Joint Technical Education Districts (JTED), which partner with neighboring schools and districts to give career and technical education courses to students under the age of 22. The students attend public high school in the morning or are homeschooled, and attend their JTED courses in the afternoon.

For some attendees like Cynthia Petit, who graduated from the cosmetology program at the East Valley Institute of Technology (EVIT), these districts are a debt-free way to acquire the necessary industry certifications.

“You can’t be a hair stylist without a license, so I would have still had to go to school,” she said. “So all of that would have been out-of-pocket.”

She said the potential cost of a private cosmetology school would have been thousands of dollars. Instead, the Red Mountain High School student began taking afternoon classes at EVIT during her senior year and completed the two-year program at age 19. She entered the workforce after graduation.

“I definitely saved a lot of money and a whole extra year of time. I was able to start my career earlier, which was nice,” she said.

Lynnette Barney has sent seven of her kids to the Pima County JTED, where they’ve received training in subjects like cosmetology, caregiving, culinary arts and EMT. She said the JTED is a way for her children to graduate from high school with marketable skills and the ability to get into a job without having to go to college.

“With nine kids, I’m paying for a substantial portion of their college education, and it’s not realistic,” Barney said.

Other JTED students proceed to a university after graduation, and others, like Corbin Chamberlin, say they went into their career without much help from JTEDs.

Chamberlin, now a freelance fashion writer for the New York Times, studied fashion merchandising at EVIT, but he said he saw the program as a way to get out of homeschooling for the day and “mess around with sewing machines.”

He said he still applies the basic fashion terminology and history he learned at EVIT, but he lamented a lack of emphasis on job placement.

“I think the intention is really great at EVIT, and I think what they want to do is wonderful, but I feel like there’s not enough muscle behind it and innovation to make it stick,” he said.

But the 2008 alumnus said he couldn’t speak for other programs in the school, which “are really beneficial for a lot of kids.”

CeCe Todd, EVIT’s public information officer, said 87 percent of the school’s students are in jobs, college or the military one year after completing their program.

Hailey Adams’ veterinary science students at West-MEC take an exam to become a certified veterinary assistant – a rung higher than the entry-level position of a kennel assistant.

“I think it’s an incredible opportunity for the students, and I would hate to see anything– whether it’s budget cuts or anything – hinder it,” Adams said.

According to many JTEDs administrators, decreased state funding is already threatening the future of their schools.

“It’s hard predict at this point,” said Tina Norton, assistant superintendent of the Pima County JTED. “But it’s easy to look at it mathematically and see it’s a very dire scenario.”

According to the Superintendent of Public Instruction’s annual reports, every type of public school district has increased in per-pupil expenditures since 2002 – with one exception. JTEDs have shrunk from $3,820 per student to $2,764.

I took a tour of @WestMEC for an article on Joint Technical Education Districts. Story to follow! pic.twitter.com/e8RA9K6kIl

Norton says the decrease can be tied to state funding cuts in the past decade. JTED funding was reduced to 91.8 percent of base level support for normal districts in 2008. Ninth grade funding was cut in 2011.

The Legislature in 2014 raised the funding level to 95.5 percent for the three largest JTEDs – Pima, West-MEC and the East Valley Institute of Technology (EVIT) – and 100 percent for the others.

But it’s the last legislative session that Norton calls devastating. Starting July 1, 2016, if a student attends both a district or charter and a JTED satellite campus, both entities will see their base support level drop to 92.5 percent for that student.

Additionally, school districts will be permitted to use funds from neighboring JTEDs “to offset the loss of regular funding,” according to the budget reconciliation bill.

Senate Appropriations Committee Chairman Don Shooter, R-Yuma, said House and Senate members made an error in shorting JTEDs during the last legislative budget process. The self-proclaimed JTED advocate said although their intention was to create a more transparent funding process, the rapid completion of the budget may have led to an oversight.

“The budget has thousands and thousands of items, as you can imagine, so it’s easy to miss sometimes,” he said.

The total cut has been estimated to be $29 million, but administrators see a potential domino effect: JTEDs eliminating programs, which reduces enrollment and in turn reduces state funding. “And it just kind of cycles down,” said Cochise Technology District Superintendent Joel Todd. “Each year, you’re going to have less and less.”

Shooter supported the 2015 founding of the Southwest Technical Education District of Yuma (STEDY), which now covers the 15th and final county in the state.

He said Yuma’s agricultural industry needs a workforce with the career and technical education that STEDY will provide.

“A lot of the industries in Arizona are crying for skilled machinists and fabricators and other things,” he said.

Although Lynnette Barney said she hasn’t seen school funding affect her older kids, she says she worries about those who have yet to enter the program.

Although the actual cut won’t take place until the 2017 fiscal year, Ackerley said JTEDs are already planning their budgets around the deficit. He said a special session – or at least an early decision to undo the cuts during the next legislative session – would be ideal.

“For the stability of these programs, if we are going to reverse the cut, it needs to be reversed soon, so that they don’t end up having to start decreasing their program offering in anticipation of that cut,” he said.

He said he had hoped the recent special session called by Gov. Doug Ducey would address JTEDs, but the session focused on fixing the inflationary lawsuit.

Ackerley and Shooter say there would be enough JTED supporters to reverse the cut if it comes down to a vote.

“I think you’d be hard pressed to find a legislator who said they don’t like JTEDs,” Norton said. “That’s not the issue. It’s really more about how much they should be funded by.”

Ackerley had formerly submitted a bill to restore ninth grade funding, but it didn’t go anywhere. However, he said the legislature may take it into consideration when planning the next budget.

“My concern is that the clock is ticking, but hopefully it can be dealt with very early in the next session so that the JTEDs do not have to go through the process of reducing their program offerings,” Ackerley said.