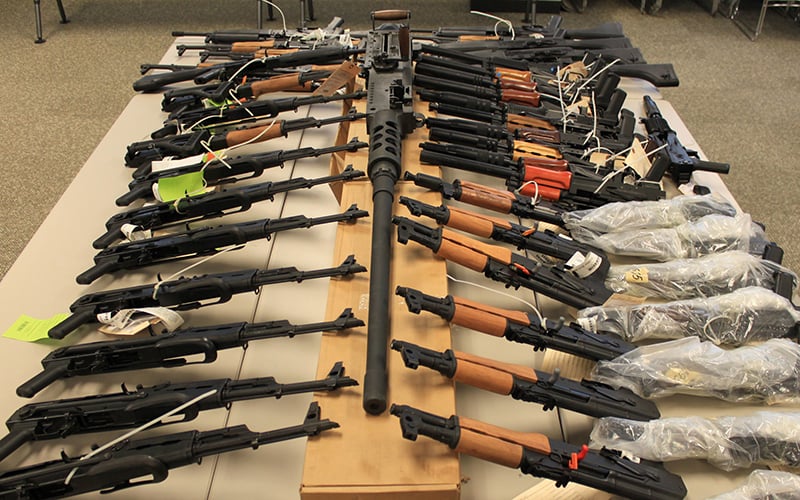 In this 2012 photo, federal officials displayed some weapons recovered from gun-trafficking operations in Phoenix. A new report called Arizona one of the top exporters of guns later used in crimes. (Photo by Rebekah Zemansky/Cronkite News) 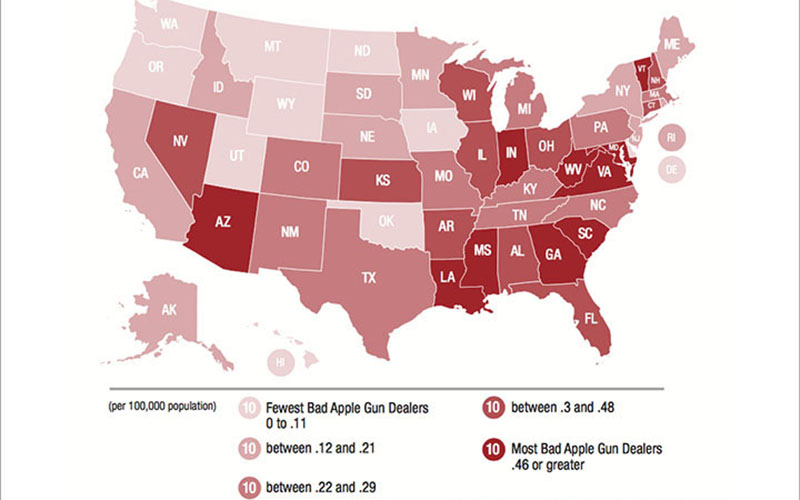 Arizona had one of the highest rates of “bad apple” gun dealers – those with a disproportionate share of guns that later were used in crimes – according to a Brady Center analysis of unpublished ATF data. Darker states have higher rates. (Map courtesy Brady Center)

WASHINGTON – Arizona is among the top 10 states for “bad apple” gun dealers, the 5 percent of dealers who sold almost 90 percent of the traceable guns later used in crimes across the U.S., a new report says.

The Report by the Brady Campaign to Prevent Gun Violence also said Arizona was the fifth-largest exporter of guns found at crime scenes in other states in 2013. Gun dealers in the state sold 2,026 guns that were used in crimes outside Arizona that year – 1,100 that wound up in California alone.

“There are a handful of bad apples out there,” said Dan Gross, president of the Brady Campaign. “They put their own profits over public safety.”

The report urged lawmakers, media and gun store owners themselves to work for the closure or cleanup of at least half of the bad apple dealers. During a conference call to release the report, Gross specifically called on the Bureau of Alcohol, Tobacco, Firearms and Explosives to crack down on these providers of “crime guns.”

In response to the report, gun-rights advocates agreed Thursday that better enforcement is needed, noting that many of the practices cited in the report are already illegal.

“Straw purchasing is illegal,” said Amy Hunter, a spokeswoman for the National Rifle Association. “The NRA has been saying all along that we don’t need more gun control, we need to enforce the laws already on the books. If dealers sell to straw purchasers, they should be prosecuted.”

Straw purchases involve someone who passed a background check buying a gun with the intention of turning it over to someone who has not or cannot pass the background check. It is one of three main avenues for guns from bad apple stores to make their way to crime scenes across the country, the report said.

The other two methods are gun trafficking and “off the books” transactions – instances, Gross said, where gun store owners lock the door, go into the back room and make sales off the books.

Gross and Rep. Ruben Gallego, D-Phoenix, who was on hand for the report’s release, compared gun dealers to other industries, with Gallego noting that if 5 percent of elevator companies were responsible for 90 percent of elevator incidents, regulators would surely take action.

Gallego, who called on Attorney General Loretta Lynch in July to prosecute bad apple dealers, renewed that call Thursday. He also said he will host a congressional panel next week to discuss the ongoing problem.

Gross acknowledged the argument raised by gun store owners, that they can’t control the guns once they leave the store. But he said they can control what happens in the shop and that they need to do a better job of that.

Gross also said the ATF knows which gun stores are bad apples and continues to do little to stop the problem.

“We know who the bad guys are … and they’re still doing business,” Gross said.

ATF officials did not immediately respond to a request for comment on the report.

Two Arizona dealers were on the report’s list of 50 “bad apple” dealers that had sold 200 or more guns that were later used in crimes.

The report said the Lone Wolf Trading Company in Glendale sold 334 guns between 1996 and 2000 – the most recent numbers available from ATF – that were traced back to it from crime scenes. A dealer listed as George W. Stahl in Tempe was linked to 245 crime guns.

Those stores were 30th and 40th, respectively, on the top 50 list. Both declined to comment on the report.

The report said the bad apples are tarnishing the image of the vast majority of law-abiding gun dealers, the 86 percent in the U.S. that do not supply a single crime gun during a given year.

“The ‘bad apples’ are compromising the safety of our communities and giving a bad name to the vast majority of gun dealers who run responsible businesses and do not supply dangerous people,” the report said.